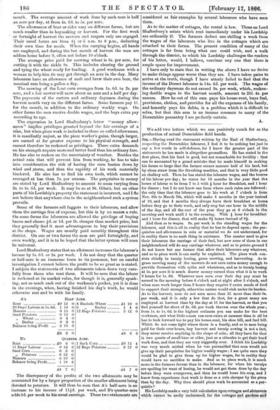 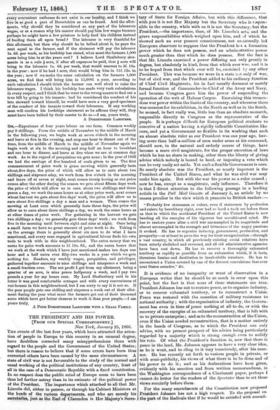 Sta, - Having read the statement written by the Earl of Shaftesbury,

respecting the Dorsetshire labourer, I feel it to be nothing but just to say a few words in self-defence, for I know the greater part of the statements he has made is altogether groundless. He has stated in the first place, that his land is good, but not remarkable for fertility : that can be accounted by a grand mistake that he made himself in making his farms so large that the farmer cannot manure half of his land, but by clean straw from the threshing machine, and that is very little good on chalkey soil. Then he has stated the labourer wages, and the hourea of his labour per day ; he states for 10 months in the year that the hours of labour to be from 7 to 5 with I hour for Breakfast, and 1 hour for dinner ; but I do not know one farm where such rides are followed: the only time that the labourer goes to his work at 7 o'clock is from Nov. 8th to March 7th, which will make 4 months in the year instead of 10, and that 4 months they always have their breakfast at home before they go to their work, and only stop but one hour in the middle of the day, and all the rest of the year they go at 6 o'clock in the morning and work until 5 in the evening. With hour for breakfast and 1 hour for dinner, that will make si hours instead of 81.

Aild then as to wages. 9s. per week is the standing wages for the labourer, and this is all in reality that he has to depend upon ; the per- quisites and allowances in coin or material we do not understand, for in reality there is no such thing in existence. The master used to give their labourers the carriage of their fuel, but now none of them in our neighbourhood will do any carriage whatever, and as to potato ground I do not know but one farmer that allow their labourers any whatever, and as to piece work it can easily be explained. The piece work con- sists chiefly in turnip hoeing, grass mowing, and harvesting. As to grass mowing many of the mowers do not earn extra money enough to provide themselves with sythe and whetstone, and as to turnip hoeing at 5s. per acre it is much dearer money earned than what it is to work

9 hours for ls. 6d. Whatever men earn over their day pay must be earned in the morning before 6 o'clock and at night after 5 o'clock, and when men work longer than 9 hours they require 2 extra meals of food to support their strength, otherwise nature would sink under its burden. As to the harvest, men do not earn more than 21. more than their Os. per week, and it is only a few that do that, for a great many are employed at harvest time by the day at 1/. for the harvest., so that you find yourself far short of 2s. 6d. per week thrown over the whole year ; from ls. to ls. 6d. is the highest estimate you can make for the beat workman, and what little a man can earn extra at summer time is all he has to look forward too to pay his house-rent, his shoe bill, and fuel bill. Which do not come light where there is a family, and as to men being paid for their over hours, hay harvest and turnip sowing is not a fact, they never receive anything in the shape of coin; all they have for that is two quarts of small beer or cider, just as a stimules to get their hard work done, and that they are very niggardly over. I think his Lordship was very much misled when he was pursuaided that men- would not give up their perquisites for higher weekly wages ; I am quite sure they would be glad to give them up for higher wages, for in reality they would have no sacrifice to make. And as to piece work, it is much more in the farmers favour than in the labourer, for when his turnips are spoiling for want of hoeing, he would not get them done by the day before they were overgrown, and then he would loose his crop, and I know from experience that work is done as a rale cheaper by the piece than by the day. Why then should piece work be accounted as a per- quieite ?

His Lordship made a very bold calculation upon cottsges and alotments which cannot be easily understoOd, for the cottages and gardens and every convenient outhouse do not exist in our locality, and I think we live in as good a part of Dorsetshire as can be found. And the allot- ments, why should they be considered as any part of the labourers wages, or as a reason why his master should pay him low wages because perhaps he might have a few potatoes to help feed -his children instead of feeding them all upon bread ? The labourer is very thankful for this allotment, but then why should he be bribed about it, he pays the rent equal to the farmer, and if the alotment will pay the labourer Is. 6d. per week, as his lordship has stated, what must the farmers 1,000 acres bring him in at the years end ? I believe Lord Shaftsbury slot- meats is as a rule acre, if after all expences be paid, that acre will bring to the labourer Is. 6d. per week, that would amount to Si. 18s. in the year now if he had 1 acre, that would bring him in 151. 12s. in the year ; now if we make the same calculation on the farmers 1,000 acres, we find that will bring him in 15,600/. a year, according to such calculation I should think the farmer can well aford to raise the labourers wages. I think his lordship has made very rash calculations in every respect, and I think that he wont to the wrong coarse to find out a true bill by going to his tenants : had he considered the conduct of his late steward toward himself, he would have seen a very good specimen of the conduct of his tenants toward their labourers. If any working man will confirm his lordships statement as he affirms they will, they must have been bribed by their master to do so.—I am, yours truly, A DORSETSHIRE LABOURER.