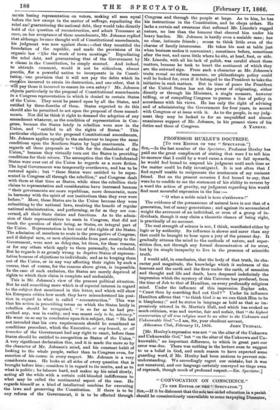 SIR"—In the last number of the Spectator, Professor Huxley has paid me the great compliment of stating that were I to tell him to-morrow that I could by a word cause a stone to fall upwards, he would feel bound to suspend his judgment until such time as the matter could be fully investigated. It is not often that I find myself unable to reciprocate the sentiments of my eminent friend. But on the present occasion I feel bound to say, that were he to confide to me the statement of his ability to reverse by a word the action of gravity, my judgment regarding him would find most mournful expression in the line :-

The evidence of the permanence of natural laws is not that of a generation, but of many generations ; and against its accumulated weight the averment of an individual, or even of a group of in- dividuals, though it may claim a theoretic chance of being right, is practically of no account.

The real strength of science is not, I think, manifested either by logic or by authority. Its influence is slower and surer than any that could be brought to bear upon a jury of the present day. It gradually attunes the mind to the methods of nature, and super- stition dies, not through any formal demonstration of its error, but by its simple incapacity to live in the presence of scientific truth.

I would add, in conclusion, that the body of that truth, its cha- racter .and magnitude, the knowledge which it embraces of the heavens and the earth and the fires under the earth, of sensation and thought and life and death, have deepened indefinitely the impression which the mystery of this Universe has produced, from the time of Job to that of Hamilton, on every profoundly religious mind. Under the influence of this impression Zophar asks, " Canst thou by searching find out God? " Under its influence Hamilton affirms that " to think God is as we can think Him to be is blasphemy;" and he states in language as bold as that so im- pressively uttered in St. Martin's Hall, and which has evoked so much criticism, wise and unwise, fair and unfair, that " the highest consecration of an true religion must be an altar to the Unknown and Unknowable God."—I am, Sir, your obedient servant, Athenaeum Club, February 11, 1866. JOHN 'TYNDALL.

[Mr. Hnxley's expression was not " on the altar of the Unknown and Unknowable God," but " on the altar of the Unknown and Un- knowable," an important difference, to which in great part our error was due. There was nothing in the lecture even to suggest to us a belief in God, and much reason to have expected some guarding word, if Mr. Huxley had been anxious to prevent mis- understanding. We exceedingly regret our mistake, but it was not unnatural, and our language certainly conveyed no tinge even of reproach, though much of profound respect.—En. Spectator.]