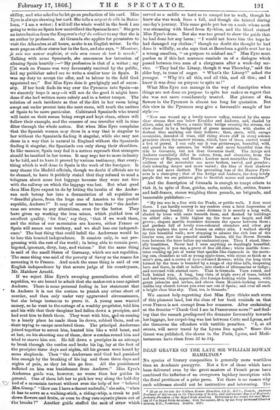 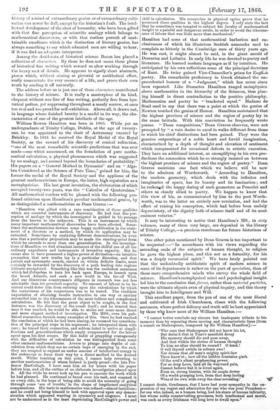 DEAN GRAVES ON THE LATE SIB. WILLIAM ROWAN HAMILTON.* No

species of literary composition is generally more worthless than an Academic panegyric. Not a few of those which have been delivered even by the great masters of French prose have combined the inflation of an overgrown lapidary inscription with the floral prettiness of a prize poem. Yet there is no reason why such addresses should not be instructive -and interesting. The

history of a mind of extraordinary genius or of extraordinary culti- vation can never be dull, except by the historian's fault. The intel- lectual development of the elect of humanity, who have been gifted with that fine perception of scientific analogy which belongs to mathematical discoverers, or with that restless pursuit of unat- tainable excellence which is the distinction of literary genius, has always something to say which educated men are willing -to hear, if it can find an adequate interpreter.

Among the desiderata of historical science Bacon has placed a collection of characters. By these he does not mean those plums of historical fine writing which reward us after working through tie heavy suet of details. He appears to signify short abstracts, pieces which, without aiming at pictorial or antithetical effect, really concentrate the very essence of a life, and prove their own truth by reading it off naturally.

The address before us is just one of these characters contributed

to the history of science. It is really a masterpiece of its kind, eloquent without one line of fine writing, perfectly free from hys- terical pathos, yet suppressing throughout a manly sorrow, at once too real and too proud for self-exhibition. Above all, it draws out, in language whose finished brevity is a model in its way, the cha- racteristics of one of the greatest intellects of the age.

William Rowan Hamilton was born in 1805. While yet an undergraduate of Trinity College, Dublin, at the age of twenty- one, he was appointed to the chair of Astronomy vacated by Brinkley. In 1834 he received the Royal Medal of the Royal Society, as the reward of his discovery of conical refraction, "one of the most remarkable scientific predictions that was ever made—one which announced, on the foundation of pure mathe- matical calculation, a physical phenomenon which was suggested by no analogy, and seemed beyond the boundaries of probability." His papers on a " General Method in Dynamics" and on " Alge- bra Considered as the Science of Pure Time," gained for him, the former the medal of the Royal Society and the applause of the greatest mathematicians in Europe, the latter, high reputation as a metaphysician. His last great invention, the elaboration of which occupied twenty-two years, was the " Calculus of -Quaternions." All mathematical readers will be pleased with the following pro- found criticism upon Hamilton's peculiar mathematical genius, by so distinguished a mathematician as Dean Graves :— " Hamilton was gifted with a rare combination of those qualities which are essential instruments of discovery. He bad that fine per- ception of analogy by which the investigator is guided in his passage from the known to the unknown. This is an instrument by which many important mathematical discoveries have been effected. Some- times the mathematician devises some happy modification in the state- ment of a theorem or a method, by which its application may be extended. Sometimes, by analyzing different demonstrations, he even sees that a particular proposition may be made the starting-point from which he ascends to more than one generalization. In the investiga- tions of Hamilton we find abundant instances of the skilful use of all the ordinary expedients and instruments of inventive sagacity. But he seems also to have possessed a higher power of divination—an intuitive perception that new truths lay in a particular direction, and that patient and systematic search, carried on within definite limits, must certainly be rewarded by the discovery of a path leading into regions hitherto unexplored. Something like this was the unshaken assurance which led Columbus to turn his back upon Europe, to launch upon the broad Atlantic, and seek a new world in the far-off West. And our illustrious countryman's diligence in research was not less admirable than his prescient sagacity. No amount of labour to be in- curred could deter him from entering upon the calculations by which the correctness of his conjectures was to be tested. The confident expectation .of obtaining results instructive in one way or another reconciled him to the irksomeness of the most tedious and complicated calculations. He felt that the great object to be sought, in the first instance, was the discovery of the result itself ; and he trusted that once it was reached, he would be able to strike out some more direct and more elegant method of investigation. His MSS., even his pub- lished researches, furnish many examples of this. Once he had reached the conclusion at which he had been aiming, he resumed the considera- tion of the principal steps in his argument ; he interpreted them with care ; he traced their connection, and seldom failed to arrive at simpli- fications and generalizations which amply compensated for the labour spent upon his first essays. By this habit of grappling courageously with the difficulties of calculation he was distinguished from some other eminent mathematicians. Averse to plunge into depths of cal- culation from which they see no certain hope of emerging in the end, they are tempted to expend an undue amount of intellectual energy in the endeavour to force their way by a direct method to the desired result. Whilst touching on this point, I cannot help reverting to another mathematician of whom Ireland is justly proud—the late Pro- fessor MacCullagh. I have seen him sit for hours with his paper before him, and all the outline of an elaborate investigation placed upon it. All the while he never took up his pen to execute the work which he had planned. He continued to brood over his task, and scanned it on every side, in the hope of being able to avoid the necessity of going through some 'sea of trouble,' in the shape of lengthened analytical computations. His taste in mathematics was refined—almost fastidious; and he could not bring himself to look with approval upon any demon- stration which appeared wanting in symmetry and elegance. I must not be understood as in the least depreciating MacCullagh's power and

skill in calculation. His researches in physical optics prove that he possessed these qualities in the highest degree. I only state the fact that he sometimes was tempted to subject ilia faculty of mathematical insight to a painful and dangerous strain, in order to avoid the irksome- ness of labour that was little more than mechanical."

Hamilton had none of that mathematical barbarism and ex-

clusiveness of which his illustrious Scottish namesake used to complain so bitterly in the Cambridge men of thirty years ago. He was cast, it might almost be said, in the giant mould of Descartes and Leibnitz. In early life he was devoted to poetry and literature. He learned modern languages as if by intuition. He anticipated by his own reflections some of the principal doctrines of Kant. He twice gained Vice-Chancellor's prizes for Euglg.42. poetry. His remarkable proficiency in Greek obtained the un- precedented honour of a "Judgment," which has never since been repeated. Like Descartes Hamilton ranged metaphysic& above mathematics in the hierarchy of the Sciences, thus plac-

ing himself in direct contradiction to the positive philosophy. Mathematics and poetry he " bracketed equal." Madame de. Stael used to say that there was a point at which the genius of

Newton touched the genius of Homer. Hamilton maintained that the highest province of science and the region of poetry lay in the same latitude. With this conviction he frequently wrote poems. " These compositions," Dean Graves observes, were not prompted by " a vain desire to excel in walks different from those in which his chief distinctions had been gained. They were the- genuine outpourings of a noble heart and fervid imagination, characterized by a depth of thought and elevation of sentiment which compensated for occasional defects in artistic execution..

They have an additional interest, as exemplifying in his own pro- ductions the connection which he so strongly insisted on between the highest province of science and the region of poetry." Dean Graves mentions one fact which we believe will be new to the admirers of Wordsworth. " According to Hamilton, the modern geometry, which deals with the infinites and imaginaries of space, has its beauty and its fascination ; and be reckoned the happy daring of such geometers as Poncelet and others as closely allied to poetry. We happen to know that this view of his, as communicated by him to the poet Words- worth, was to the latter an entirely new revelation, and had the effect of raising his conception, which had before been unduly depreciatory, of the dignity both of science itself and of its most eminent votaries." •

It may be interesting to notice that Hamilton's MS., in sixty volumes, many of them very large, are deposited in the library

of Trinity College,—a precious storehouse for future historians of science.

One other point mentioned by Dean Graves is too important to be unquoted :—" In accordance with his views regarding the

ascending scale of the subjects of human thought, to religion he gave the highest place, and this not as a formality, for his was a deeply reverential spirit." We have lately pointed out that the undoubtedly antitheistic spirit of modern science in some of its departments is rather on the part of specialists, than of those more comprehensive minds who survey the whole field of

science. Hamilton's metaphysical mind and psychological insight led him to the conclusion that forces, rather than material particles, were the ultimate objects even of physical inquiry, and this theory brought him to Intelligence and Will.

This excellent paper, from the pen of one of the most liberal and cultivated of Irish Churchmen, closes with the following sentences, whose perfect delicacy and truth will be best appreciated by those whi knew most of Sir William Hamilton :—

" I cannot better conclude my sincere but inadequate tribute to his memory than by repeating those moving and characteristic lines rfrorn a sonnet on Shakespeare, composed by Sir William Hamilton] :—

Who says that Shakespeare did not know his lot, But deem'd that in Time's manifold decay His memory should die and pass away, And that within the shrine of human thought To him no altar should be reared ? 0 hush !

Nor dream that all man's mighty spirit-law Thou know'st ; how all the hidden fountains gush Of the soul's silent prophesying power.

For as deep Love, 'mid all its wayward pain, Cannot believe but it is loved again, Even so, strong Genius, with its ample dower Of a world-grasping love, from that deep feeling

Wins of its own wide sway the clear revealing.' 41, I cannot doubt, Gentlemen, that I have had you& sympathy in the ex- pression of my regret and admiration for one who was your President— for one who indeed, as a human being, had his share of human infirmity, but whose nobly countervailing greatness, both intellectual and moral„ was such as every Irishman will long love to dwell upon."