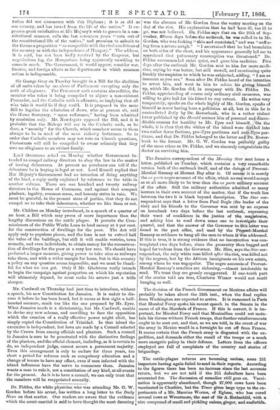 Sir George Grey on Tuesday brought in a Bill for

the abolition of all oaths taken by members of Parliament excepting only the oath of allegiance. The Protestant oath contains absurdities, the member who takes it being compelled to abjure a non-existent Pretender, and the Catholic oath is offensive, as implying that all who take it would lie if they could. It is proposed in the same Bill to legalize the admission of Jews, who at present sit, said the Home Secretary, " upon sufferance," having been admitted by resolution only. Mr. Newdegate opposed the Bill, and it is probable that the Bishops will see in the Catholic oath, as he does, a "security" for the Church, which somehow seems to them always to be in need of the meat ricketty buttresses. So in order that Catholic members may not vote on Church questions, Protestants will still be compelled to swear solemnly that they owe no allegiance to an extinct family.