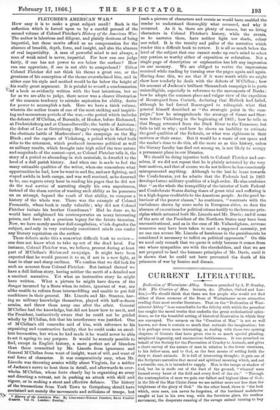 11:311‘ • HitilorY of As American War. By Lieutenant-001one Fletcher, Soots Fusilier Guards. Vol. IL Loudon: Bentley. How easy it is to make a great subject small! Such is the reflection which is forced upon us by a careful perusal of the second volume of Colonel Fletcher's History of the American War. The author is laborious and diligent, and plainly desirous of being impartial, but these merits afford us no compensation for the absence of breadth, depth, force, and insight, and also the absence of real impartiality. A man of powerful mind is not always, a man of weak mind is never, impartial. For how can one judge fairly, if one has not power to see below the surface? How can one appreciate, if one is not able to comprehend? Either Colonel Fletcher did not think his theme a great one, or the greatness of his conception of the theme overwhelmed him, and in either case his style and method would be far below the height of -.his really great argument. It is painful to record a condemnation Ubf a book so evidently written with the best intentions, but so far as we are able to judge, there never was a clearer illustration of the common tendency to mistake aspiration for ability, desire for power to accomplish a task. Here we have a thick volume, wherein the author treats of one of the most striking and inspirit- ing and momentous periods of the war,—the period which includes the defeats of M'Clellan, of Burnside, of Hooker, before Richmond, at Fredericksburg and at Chancellorsville; the battle of Antietam; the defeat of Lee at Gettysburg ; Bragg's campaign in Kentucky ; the obstinate bade of Murfreesboro' ; the campaign on the Big Black ; and the capture of Vicksburg, a period which tried both sides to the utternfost, which produced immense political as well as military results, which brought into high relief the true nature and magnitude of the contest—yet, as Colonel Fletcher tells it, the story of a period so abounding in rich materials, is dwarfed to the level of a dull parish history-. And when one is made to feel the many estimable qualities of the writer, when one remembers what opportunities he had, how he went to and fro, and saw fighting, and stayed awhile in both camps, and was well received, as he deserved to be, one regrets every hour in reading his pages that he did not do the real service of narrating simply his own experiences, instead of the sham service of wasting such ability as he possesses on an attempt, beyond the reach of that ability, to compose a history of the whole war. There was the example of Colonel Fremantle, whose book is really valuable ; why did not Colonel Fletcher imitate his brother Guardsman ? Had he done so, he would have enlightened his contemporaries on many interesting points, and have left a precious legacy for the future historian. Now, we have merely another dull compilation, which degrades the subject, and only in very curiously constituted minds can confer any literary reputation on the author.

These defects make this a somewhat difficult book to review— one does not know what to take up out of the dead level. For instance, Colonel Fletcher was, we believe, present during at least part of M'Clellan's Richmond campaign. It might have been expected that he would present it to us, if not in a new light, at least in clear and sharp outlines. We confess that we did look for such an account from Colonel Fletcher. But instead thereof we have a dull listless story, having neither the merit of a detailed nor a succinct narrative. Yet what an instructive story he might have written. What a picture he might have drawn of the danger incurred by a State when its rulers, ignorant of war, are alike unable to refrain from intermeddling and unable to put full confidence in their general. Mr. Lincoln and Mr. Stanton, hav- ing no military knowledge themselves, played with half-a-dozen armies, and threw them away one after the other. General M'Clellan had the knowledge, but did not know how to use it, and the President, instinctively aware that he could not be guided wholly by M'Clellan, felt that his interference was justified. One of M'Clellan's old comrades said of him, with reference to his organizing and constructive faculty, that he could make an excel- lent locomotive, but when he had made it he would never be able to set it agoing to any purpose. It would be scarcely possible to find, except in English history, a more perfect set of blunders than those committed by Mr. Lincoln from ignorance and General M'Clellan from want of insight, want of will, and want of real force of character. It was comparatively easy, when Mr. Lincoln was throwing armies wildly about Virginia, for a soldier of Jackson's nerve to beat them in detail, and afterwards to over- whelm M'Clellan, whose forte clearly lay in organizing an army and directing a retreat, not in pushing an attack with skill and vigour, or in making a stout and effective defence. The history of the transactions from York Town to Gettysburg should have contained not merely the movements and collisions of troops, but

such a picture of characters and events as would have enabled the reader to understand thoroughly what occurred, and why it occurred. As it is, there are plenty of names, but no living characters in Colonel Fletcherce history, while the events, as he narrates them, have neither light nor shade, colour nor relief. It is the tenuity and pallor of the narrative which render this a difficult book to review. It is all so much below the level of the subject that one cannot make up one's mind to select any portion as worthy either of exposition or refutation. Not a single page of description or explanation has left any impression on our memory. We are obliged to revive the impressions received while reading by turning over the pages again and again. Having done this, we see that if it were worth while we might show how tenderly he deals with the defects of M'Clellan ; how his account of Jackson's brilliant Shenandoah campaign is in parts unintelligible, especially in reference to the movements of Banks ; how he adopts the common-place and vulgar view of the expulsion of Beauregard from Corinth, declaring that Halleck had failed, although he had forced Beauregard to relinquish what that general himself described as " the strategic point in the cam- paign ;" how he misapprehends the strategy of Grant and Sher- man before Vicksburg in the beginning of 1863 ; how he tells us that Bragg retreated from the Duck River to the Tennessee, but fails to tell us why ; and how he shows an inability to estimate the good qualities of the Federals, or what was righteous in their motives or their cause. But it would be a waste of our space and the reader's time to do this, all the more so as this history, unless the literary faculty has died out among us, is not likely to occupy a permanent place in our libraries.

We should be doing injustice both to Colonel Fletcher and our- selves, if we did not repeat that he is plainly actuated by the very best motives, and that of course we do not believe he has consciously misrepresented anything. Although to the last he leans towards the Confederates, yet he admits that the Federals had in 1863 developed some military qualities of a high order. He also confesses that " on the whole the tranquillity of the interior of both Federal and Confederate States during times of great trial and suffering is in a high degree creditable to the American people. As the good be- haviour of the poorer classes," he continues, "contrasts with the turbulence shown by some mobs in European cities, so does the absence of executions for political crimes testify to the humane prin- ciples which actuated both Mr. Lincoln and Mr. Davis ; and if some of the acts of the President of the Northern States may have been unconstitutional, and as in the case of Mr. Vallandigham, extreme measures may have been taken to meet a supposed necessity, yet no one can accuse Mr. Lincoln of harshness in the punishments he considered it necessary to inflict on political opponents." On this we need only remark that we quote it solely because it comes from one whose sympathies are with the slaveholders, and that we are not prepared to laud the humane principles of Mr. Davis, until it is shown that he could not have prevented the death of his prisoners of war by famine and disease.