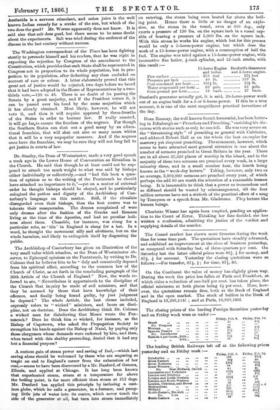 Dr. Stanley, the Dean of Westminster, made a very good

speech a week ago in the Lower House of Convocation on Ritualism in the Church. He said that though he at least could not be sup- posed to attach too much weight to what was said by bishops either individually or collectively,—and "had this been a ques- tion of opinion as to the writing of the Pentateuch he should have attached no importance to it,"—yet on a matter of external -order he thought bishops should be obeyed, and he particularly eulogized the pathos and dignity of the Archbishop of Can- terbury's language on this matter. Still, if the ritualists .disregarded even their bishops, then the beat course was to tolerate their masquerades. The dresses complained of were only dresses after the fashion of the Greeks and Romans living at the time of the Apostles, and had no peculiar holi- ness about them. Chasuble, for instance, was slang for a particular robe, as ' tile' in England is slang for a hat. In a word, he thought the movement silly and obstinate, but on the whole harmless, and likely to extinguish itself by disgusting the public.