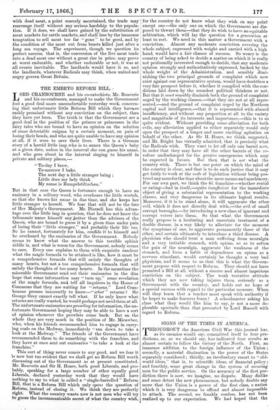 LORD CRANBOURNE and his co-catechists, Mr. Bouverie and his co-confessors, managed to make the Government feel a good deal more uncomfortable yesterday week, concern- ing that unfortunate little Reform Bill which they have.so rashly promised without any conviction on the subject, than they have yet been. The truth is that the Government are a good deal in the position of the princes or princesses in the fairy tales who are bound to have an opinion on the solution of some detestable enigma by a certain moment, on pain of losing their heads, and who are quite unable to have any opinion at all, if it were to save their lives. There is a German story of a horrid little imp who is to annex the Queen's baby at a given date, unless in the interval she can guess his name, and who goes about in the interval singing to himself in private and solitary places,-

"To-day I brew, To-morrow I bake, The next day a little stranger bring ; Little does my lady think My name is Rumpelstiltzchen."

But in that case the Queen is fortunate enough to have an emissary in a solitary wood, who overhears the little -wretch, so that she knows his name in due time, and she keeps her little stranger to herself. We fear that will not be the fate of Her Majesty's Government. Mr. Disraeli has this advan- tage over the little imp in question, that he does not know the talismanic name himself any getter than the advisers of the Queen, who are bound to guess it by a given time under pain of losing their "little stranger," and probably their life too. So" he cannot, fortunately for him, confide it to himself and be overheard by the emissaries of the Government. Nobody seems to know what the answer to this terrible sphinx riddle is, and what is worse for the Government, nobody seems to care. Every one explains to them with exquisite candour what the magic formula to be attained is like, how it must be a comprehensive formula that will satisfy the thoughts of many hearts, but not a too comprehensive formula that will satisfy the thoughts of too many hearts. In the meantime the miserable Government send out their emissaries in the dim hope that some information may " turn up," some revelation of the magic formula, ancl tell all inquirers in the House of Commons that they are waiting for " returns." Lord Oran- bourne presses innocently to know—" what " returns ? Sir George Grey cannot exactly tell what. If he only knew what returns are really wanted, he would perhaps not need them at all. The unfortunate emissaries are prowling for information, the un- fortunate Government hoping they may be able to have a sort of opinion whenever the prowlers come back. But on the whole they are very much in the position of Mr. Micawber, who, when his friends recommended him to engage in carry- ing coals on the Medway, immediately "ran down to take a look at the Medway." The friends of the Government have recommended them to do something with the franchise, and they have at once sent out emissaries "to take a look at the franchise."

This sort of thing never comes to any good, and we fear it is now but too evident that we shall get no Reform Bill worth discussing out of the Government as at present constituted. Mr. Bouverie and Sir H. Hoare, both good Liberals, and pro- bably, speaking for a large number of other equally good Liberals, declared yesterday week that they would have nothing to say to what is called a " single-barrelled " Reform Bill, that is a Reform Bill which only opens the question of Reform, instead of closing it. We think they are perfectly right. What the country wants now is not men who will try to guess the incommunicable secret of what the country wish, for the country do not know what they wish on any point except one—the only one on which the Government are dis- posed to thwart them—that they do wish to have an equitable arbitration, which will lay the question for a generation at least to rest. We need in this matter a Government with a conviction. Almost any moderate conviction covering the whole subject, expressed with weight and carried with a high hand, would have a fair chance of success. So weary is the country of being asked to decide a matter on which it is really not profoundly interested enough to decide, that any moderate opinion strongly and authoritatively expressed, backed by the whole weight of the Administration, and sensibly dimi- nishing the two principal grounds of complaint which now exist against our representative system, would have doubtless a very fair prospect before it, whether it complied with the con- ditions laid down by the soundest political thinkers or not. But that it must sensibly diminish both the ground of complaint urged by the working classes,—that they are not at all repre- sented,—and the ground of complaint urged by the Northern capital and intelligence,—that it is represented with absurd insufficiency, and without any proportion at all to the variety and magnitude of its interests and importance,—this is to us quite evident. Without providing some alleviation for both evils, any alleviation applied to either separately would only open the prospect of a longer and more exciting agitation on behalf of the other. As Sir H. Hoare, we think, suggested, and Mr. Bright has virtually admitted, that is precisely what the Radicals wish. They want to let off only one barrel now, in order that they may have all the other barrels of the re- volver undischarged for the greater emergencies which may be expected in future. But then that is not what the country wish. There is but one point on which the mind of the country is clear, and that is to do such justice that it may get fairly to work at the ends of legislation without being pes- tered anymore forthe time about the mere means and machinery. For our own part, we think the 61. franchise—whether rental or rating—bad in itself,—quite insufficient for the immediate object of giving a substantial representation to the working classes, and very dangerous in its ultimate logical results. Moreover, if it is to stand alone, it will aggravate the other evil, which it does not directly deal with,—the evil of small corrupt boroughs,—by introducing a new class of ignorant and corrupt voters into them. So that what the Government really propose is a hesitating and uncertain treatment of a double disease, in a way likely to alleviate for the moment the symptoms of one, to aggravate permanently those of the other, and certain ultimately to introduce a third disease. A physician who should treat a man suffering from neuralgia and a very irritable stomach, with opium, so as to soften the pain of the neuralgia, aggravate the weakness of the stomach, and form a habit of dependence on opium as a nervous stimulant, would certainly be thought a very bad physician, and it seems to us that this is what the Govern- ment propose with respect to Reform. They should not have promised a Bill at all, without a sincere and almost imperious conviction on the subject. The weak tentative attitude which they are now taking injures them seriously as a Government with the country, and holds out no hope of a special success with regard to the particular measure. When will they learn that a teacher must speak with authority if he hopes to make learners learn ? A schoolmaster asking his class what they would like him to say, is not a more de- plorable spectacle than that presented by lord Russell with regard to Reform.