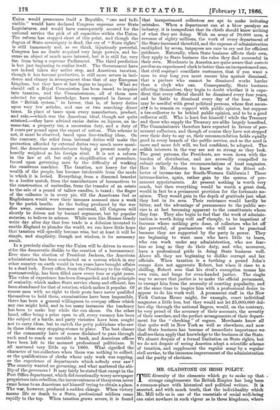 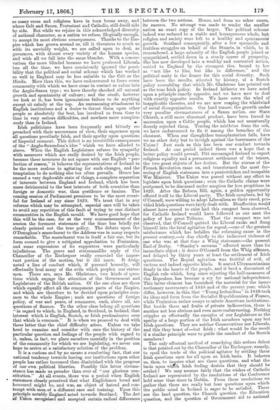 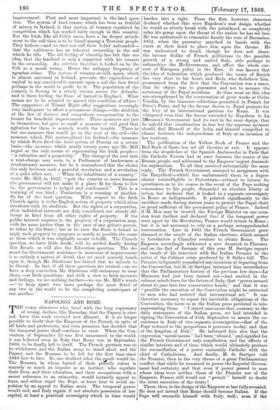 LIME diversity of the elements which go to make up that• • strange conglomerate the British Empire has long been a common-place with historical and political writers. It is

and with much truth, that the individuality which Mr. Mill tells us is one of the essentials of social well-being can exist nowhere in such vigour as in these kingdoms, where so many races and religions have in turn borne sway, and where Celt and Saxon, Protestant and Catholic, still dwell side by side. But while we rejoice in this acknowledged diversity of national character, as a nation we refuse, illogically enough, to accept its most obvious consequences. Thanks to the Em- pire which has grown around us, till it threatens to crush us with its unwieldy weight, we are called upon to deal, as governors, with almost every variety of the human species, and with all we fall into the same blunder. With a conser- vatism the more blinded because we have professed LiberaL ism all the time, we have consistently ignored the possi- bility that the political and social scheme which has worked so well in England may be less suitable to the Celt or the Hindu. More than this, we have endeavoured to force every community with which we have come in contact as rulers into the Anglo-Saxon type ; we have thereby checked all natural growth and spontaneity of culture ; and the result, however we look at it, has been ignominious failure to do anything except sit calmly at the top. An unreasoning attachment to English institutions and a desire to thrust them upon other people as absolutely the best, has involved us from time to time in very serious difficulties, and nowhere more conspicu- ously than in Ireland. a.

The only effectual method of remedying this serious defect is that pointed out by the Chancellor of the Exchequer, namely, to spoil the trade of the political agitator by settling these Irish questions once for all upon an Irish basis. It behoves us, then, to inquire what are these questions, and what the basis upon wh!ch Irish feeling desires that they should be settled ? We may assume fairly that the wishes of Catholic Ireland are represented by the resolutions of the Conference held some time since in Dublin. From these -resolutions we gather that there are really but four questions upon which the public mind in Ireland is eager to be satisfied. These are the land question, the Church question, the Education question, and the question of Government aid to national improvement. First and most important is the land ques- tion. The system of land tenure, which has been so fruitful of misery in Ireland, is that system of tenancy regulated by competition which has worked fairly enough in this country. But the Irish, like all Celtic races, have a far deeper attach- ment to the soil than is to be found among a Teutonic people. They believe—and we dare not call their belief unfounded— that the cultivator has an inherent ownership in the soil which he tills. The old feeling of clanship has left this one idea, that the landlord is only a copartner with his tenants in the ownership. An eviction therefore is looked on by the Celt as a moral wrong. Hence the unhappy frequency of agrarian crime. The system of tenancy-at-will, again, which is almost universal in Ireland, prevents the expenditure of capital to any considerable amount upon a soil the best fitted perhaps in the world to profit by it. The population of the country is flowing in a steady stream across the Atlantic, and is there feeding the flame of hatred to England. What means are to be adopted to amend this condition of affairs ? The supporters of Tenant Right offer suggestions seemingly very inadequate to affect a permanent change,—the abolition of the law of distress and compulsory compensation to the tenant for beneficial improvements. These measures are just in themselves, but give so small a measure of real good that agitation for them is scarcely worth the trouble. There is but one measure that would go to the root of the evil—the measure which Pitt contemplated for Ireland—the measure by which Stein fixed the land system of Prussia on a secure basis—the measure which nearly twenty years ago Mr. Mill urged as the only means of regenerating the Irish people- " a valuation and a perpetuity." The change of the rent into a rent-charge may seem to a Parliament of landowners a revolutionary measure, but be it remembered that the choice lies only between such a peaceful revolution and a revolution of a quite other sort. " When the inhabitants of a country," wrote Mr. Mill, in 1847, "quit the country en masse because the government will not make it a place fit for them to live in, the government is judged and condemned." This is a warning of one kind ; Fenianism is a warning of another. So far of the land question. With respect to the Irish Church, again, it is the English notion of property which alone interferes with its abolition. But the rights of a corporation, after individual interests are duly considered, are clearly dif- ferent in kind from all other rights of property. If the public interest requires it, the property of a corporation may, with far more justice than in the case of any private person, be taken by the State ; but in its turn the State is bound to apply such property to purposes as nearly as possible the same as those which it was originally meant to fulfil. The Church question, we have little doubt, will be settled finally during this decade, as will also the Education question. The de- mand for Government assistance in measures of improvement is so entirely a matter of detail that we need scarcely touch upon it, though Mr. Gladstone has hinted that he intends to be liberal. In fact, if all these questions are treated,—as we have a deep conviction Mr. Gladstone will endeavour to treat them,—as Irish questions, and with a view to Irish interests and feelings, we see nothing further—we use Mr. Mill's words —" to keep apart two races perhaps the most fitted of any two in the world to be the completing counterpart of one another."