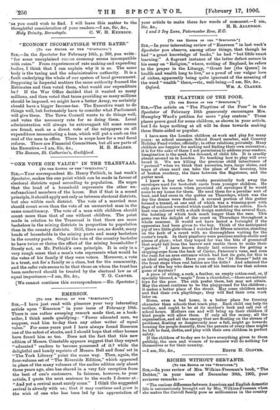 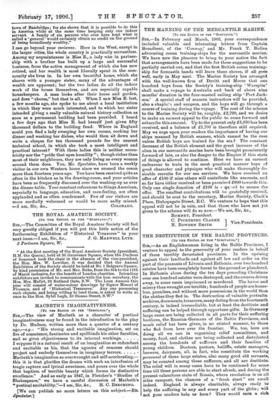 LTO TH2 EDITOR OF THE "SPECTATOR."]

Sia,—In your review of Mrs. Wilkins-Freeman's book, "The Debtor," in your issue of December 30th, 1905, your reviewer remarks :—

"The curious difference between American and English domestic life is unconsciously brought out by Mrs. Wilkins-Freeman when she makes the Carroll family pose as millionaires in the country

town of Bainbridge ; for she shows that it is possible to do this in America while at the same time keeping only one indoor servant. A family of six persons who over here kept what is called a general' would certainly obtain no credit on the ground of being boundlessly wealthy."

I can go beyond your reviewer. Here in the West, except in the larger cities, the whole country is practically servantless. Among my acquaintances is. Miss E., a lady who in partner. ship with a brother has built up a large and successful business, from the active management of which she has now retired, and her wealth is most liberally spent in the com- munity she lives in. In her own beautiful home, which she shares with a younger sister, many of the advantages of wealth are apparent; but the two ladies do all the indoor work of the house themselves, and are especially capable housekeepers. A man looks after their horse and garden, and does "chores," but that is all. When I saw Miss E. last, a few months ago, she spoke to me about a local institution in which they were much interested, and to which her sister intended giving a really valuable natural history collection as soon as a permanent building had been provided. I heard a few days ago that Miss E. had herself just given fifty thousand dollars to the building fund. Where in England could you find a lady sweeping her own rooms, cooking her dinner and washing her dishes, who would then sit down and write a cheque for ten thousand pounds for the nearest technical sehool, in which she took a most intelligent and practical interest ? With these ladies this is neither eccen- tricity nor the "pride that apes humility " ; though richer than

most of their neighbours, they are only living as every woman around them does. You, Mr. Spectator, have been a weekly

visitor in our own Western home since we crossed the ocean more than fourteen years ago. You have been received quite as often in the kitchen as in the drawing-room, and your articles have been as frequently discussed over the washing-up as over the dinner-table. Your constant references to thinks American, especially to language, education, and race-feeling, are often applauded and as often condemned. Few of our visitors are more cordially welcomed or would be more sadly missed.