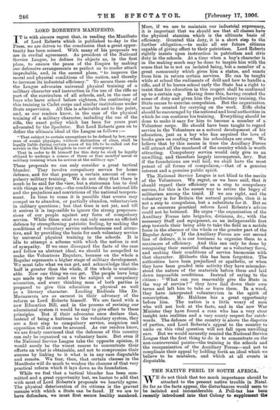 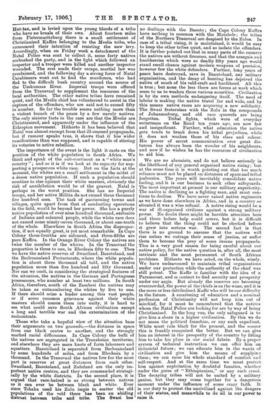 THE NALIVE PERIL IN SOUTH AFRICA.

WE do not think that too much importance should be attached to the present native trouble in Natal. So far as the facts appear, the disturbances would seem to be isolated and. inconsiderable. A Poll-tax has been recently introduced into that Colony to supplement the Hut-tax, and is levied upon the young bloods of a tribe who have no kraals of their own. About fourteen miles from Pietermaritzburg there is a small settlement of Christianised Kaffirs belonging to the Mvelis tribe, who announced their intention of resisting the new levy. Accordingly, when on Friday week a detachment of the Natal Police was sent to collect it, some forty natives ambushed the party, and in the fight which followed an inspector and a trooper were killed and another inspector wounded. The rest made their escape, martial law was proclaimed, and the following day a strong force of Natal Carabineers went out to find the murderers, who had fled to the difficult bush country around the source of the Umkomaas River. Imperial troops were offered from the Transvaal to supplement the resources of the local authorities. The other native tribes have remained quiet, and the Mvelis chief has volunteered to assist in the capture of the offenders, who are said not to exceed fifty in number. So far the trouble seems nothing more than a violent breach of the peace by a few unruly natives. The only sinister facts in the case are that the Mvelis are Christianised, and apparently under the influence of the Ethiopian movement. Hitherto it has been believed that Natal was almost exempt from that ill-omened propaganda, but if rumour speaks true, it shows that it has wider ramifications than was supposed, and. is capable of stirring its votaries to active rebellion.

The importance of the event is the light it casts on the position of the white population in South Africa. We think and speak of the sub-continent as a "white man's country " ; and so it is if we look at its capacity for sup- porting a prosperous white race. But on the facts at the moment, the whites are a small settlement in the midst of a dense native population. If such a population should combine to rise against their white masters, obviously the risk of annihilation would be of the gravest. Natal is perhaps in the worst position. She has no Imperial troops, and her active Militia do not exceed three thousand five hundred men. The task of garrisoning towns and villages, quite apart from that of conducting operations in the field, would be beyond her power. She has a purely native population of over nine hundred thousand, exclusive of Indians and coloured people, while the white race does not exceed some ninety-seven thousand, or about one-tenth of the whole. Elsewhere in South Africa the dispropor- tion, if not equally great, is yet most remarkable. In Cape Colony three-fourths are coloured, and three-fifths are pure Kaffirs. In the Orange River Colony the natives are twice the number of the whites. In the Transvaal the proportion is three to one, in Rhodesia fifty to one. Then we have the native reserves of Swaziland, Basutoland, and the Bechuanaland. Protectorate, where the white popula- tion is about three thousand all told, and. the native population more than five hundred and fifty thousand. Nor can we omit, in considering the strategical features of the situation, the natives in the German and Portuguese possessions, who number at least two millions. In South Africa, therefore, south of the Zambesi the natives may be taken as outnumbering the whites by five to one. If there should arise a leader among this vast people, or if some common grievance against their white masters should coerce them into unity, it is hard to see what could save South African civilisation except a long and terrible war and the extermination of the malcontents.

Those who take a hopeful view of the situation base their arguments on two grounds,---the distance in space from one black centre to another, and the strongly marked racial differences. In Cape Colony the bulk of the natives are segregated in the Transkeian territories, and elsewhere they are mere knots of farm labourers and squatters. Basutoland is separated from Bechuanaland by some hundreds of miles, and. from Rhodesia by a thousand. In the Transvaal the natives live for the most part in reserves at great distances from each other. Swaziland, Basutoland, and Zululand are the only im- portant native centres, and. they are commanded strategi- cally by the white districts. In the second place, it is argued that race-hatred is as strong between natives as it can ever be between black and white. Ever since Tchaka used his Zulu impis to scatter the old. populations of the veld there has been an abiding distrust between tribe and tribe. The Swazi has no dealings with the Basuto ; the Cape Colony Kaffirs have nothing in common with the Matabele ; the tribes of the Northern Transvaal are despised by the Zulus. In case of a tribal rising, it is maintained, it would be easy to keep the other tribes quiet, and so isolate the offenders. It is further pointed out that in many parts of the country the natives are without firearms, and that the assegais and knobkerries which were so deadly fifty years ago would stand small chance against modern weapons of precision, however few the white defenders. Further, long years of peace have destroyed, save in Basutoland, any military organisation, and the decay of hunting has deprived flit, native of much of his veld-craft and hardihood. All this is true ; but none the less there are forces at work which seem to us to weaken these various securities. Civilisation is by its own methods endangering itself. The need. of labour is making the native travel far and wide, and by this means native races are acquiring a new solidarity. The Swazi fraternises with the Zulu in the compounds of Johannesburg, and old race quarrels are being forgotten. Tribal fights, which were of everyday occurrence on the Rand ten years ago, are now few and insignificant. Further, what education the native gets tends to break down his tribal prejudices, while it does not weaken those of his class and colour. His power of secret communication over great dis- tances has always been the wonder of his neighbours, and now if he wishes he has the resources of civilisation to aid him.

We are no alarmists, and do not believe seriously in the likelihood of any general organised native rising ; but at the same time it is worth pointing out that too much reliance must not be placed on distances of space and tribal. jealousies. The years will inevitably consolidate native feeling, and it is our business to seek other safeguards. The most important at present is our military superiority. The native is declining as a fighting man, and must con- tinue to decline. We have never raised native regiments as we have done elsewhere in Africa, and in a country so situated it was a wise refusal. A native rising would be a war of ill-orabauised civilians against a strong military power. No doubt there might be horrible atrocities here and there before help could arrive, but it is difficult to believe that the thing could not be checked before it grew into serious war. The second fact is that there is no ground to assume that the natives will rise unless we outrage their sense of justice, or suffer them to become the prey of some insane propaganda. This is a very good reason for being careful about our native policy, for the native question is, after all, the most intricate and the most permanent of South African problems. Hitherto we have acted, on the whole, wisely. We have endeavoured to maintain tribal organisations under our protection while the authority of the chief was still potent. The Kaffir is familiar with the idea of a Paramount, and is content to find security and prosperity under our aegis. But already the reserves are becoming overcrowded, the power of the chiefs is on the wane, and it is the more or less detribalised Kaffir who will be our difficulty in the future. A smattering of education and a nominal profession of Christianity will not keep him out of mischief, for it must be remembered that the natives whom the Natal Police are looking for are by way of being Christianised. In the long run, the only safeguard is to give him a share in a higher civilisation. By this we do not mean the political franchise, or any such expedient. White must rule black for the present, and the sooner this is frankly recognised the better. But we can give him an interest in the prosperity of the country by fitting him to take his place in our social fabric. By a proper system of technical instruction we can offer him an industrial future ; we can educate him in the wants of civilisation and give him the means of supplying them ; we can raise his whole standard of comfort and self-respect. And at the same time we must protect him against exploitation by doubtful fanatics, whether under the guise of " Ethiopianisna," or any such creed. The decaying tribes will not be united by a military genius, but they may come together for a dangerous moment under the influence of some crazy faith. It is our duty to protect the uncivilised against the dangers of their status, and meanwhile to do all in our power to raise it.