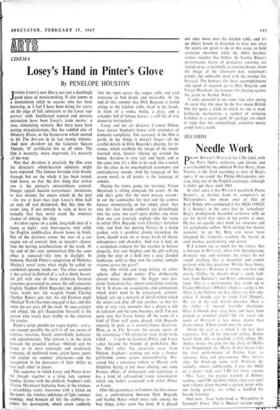 on the edge of full admission to the Losey sup- porters' club. Intellectual control and nervous extremism have been Losey's trade marks: a

rare, stimulating mixture. But there have been jarring miscalculations, like the raddled chic of Modesty Blaise, or the brainstorm which seemed to hit The Servant in its last twenty minutes. And now Accident (at the Leicester Square Theatre, 'A' certificate) lets us all relax. The ' film is masterly; more important, it's masterly all the way.

have expected. The famous baroque style breaks through but on the whole it has been tamed, held down, so that the first thing that strikes one is the picture's extraordinary control.

Danger signals beckon everywhere: invitations to that instinct for excess which in the past —for me at least—has kept Losey's films half an inch off real distinction. But this time the sirens sing, if not entirely in vain, at least so mutedly that they never stand the remotest chance of sinking the ship.

Accident opens on a calm, long-held shot of a house at night: very four-square, very solid,

Out of the darkness comes the roar of a car engine out of control; then an instant's silence; then the tearing reverberations of the crash. At the end of this very symmetrical film the same effect is repeated—this time in daylight. In between, Harold Pinter's adaptation of Nicholas Mosley's novel turns what might be called an accidental episode inside out. The other accident is the arrival in Oxford of a rafter dimly beauti- ful girl with one of those elaborate German surnames guaranteed to amuse the self-conscious English. Stephen (Dirk Bogarde), her philosophy tutor, wants her; his waspish friend Charley (Stanley Baker) gets her; his old Etonian pupil (Michael York) becomes engaged to her, and dies when the car goes off the road. At once catalyst and object, the girl (Jacqueline Sassard) is the person who reacts least visibly to the situation she creates.

Pinter's script plumbs no vague depths: every- one (except possibly the girl) is all too aware of

motives, evasions, barely controllable jealousies and apprehensions. The tension is in the clash between the graceful surface—Oxford seen by Losey at its most enticingly and insidiously romantic, all mellowed stone, green lawns, punts and cricket on summer afternoons—and the recognition in the characters of their ability to tear each other to pieces.

The sequence in which Losey and Pinter draw the threads together is a long, lazy summer Sunday. Games with the children; Stephen's wife (Vivien Merchant) buttering buns in the kitchen; a scrambling tennis foursome with a kitten on the court; the timeless indolence of light summer evenings. And beneath all this the stabbing in- stincts for destruction, which crack suddenly into the open across the supper table and send everyone to bed drunk and miserable. At the

end of this summer day Dirk Bogarde is found sitting at the kitchen table, head in his hands, in front of a vodka bottle, a glass, and a colander full of lettuce leaves: a still life of wry domestic melancholy.

Losey and his art director, Carmen Dillon, have strewn Stephen's house with reminders of domestic complicity. The accuracy of the film is partly in the things it doesn't forget—all the careful details in Dirk Bogarde's playing, for in-

stance, which establish the image of the much- married man, forever tidying up around the house. Accident is very taut and lucid; and at the same time it's a film to be read, like a novel, for the clues in its uncompleted statements and contradictory moods. And the language of this screen novel, at all points, is the language of cinema.

During the tennis game, for instance, Vivien Merchant is sitting alongside the court. At the end she's gone (for the most prosaic reason: to cut the sandwiches for tea) and the camera focuses momentarily on her empty chair. Just why this shot should suddenly cut disturbingly into the scene one can't quite define; any more than one can precisely explain why the scene in which Dirk Bogarde visits Charley's forsaken wife, and finds her picking flowers in a damp garden, with a sprinkler glumly drenching the lawn, should work on so many levels of threat, unhappiness and absurdity. And was it luck, or a scrupulous concern for the weather to behave properly, that sent Stephen and the girl walking along the edge of a field into a grey clouded landscape, until as they turn the corner sunlight streams across the grass?

Any film which can keep hitting an atmo- spheric effect dead centre (I've deliberately chosen minor incidents: the bigger ones pro- claim themselves) has almost everything working for it. It draws on associations and connections which don't need to be consciously acknow- ledged; sets up a network of detail within which the actors can play off one another, so that it's only at very rare moments that a player is left in isolation and the tone becomes shrill. I'm not quite sure that Losey brings off the scene of a kind of Eton wall game played, with Bogarde uneasily in goal, as a country-house diversion. Here, as in The Servant, the arcane sports of the aristocracy CAB aristocrats were made to be killed . . .) seem to fascinate Pinter and Losey rather beyond the bounds of probability. But the film's other big excursion away from Oxford, Stephen's evening out with a former girl-friend, comes across extraordinarily. Pre- sented like a conscious tribute to Muriel, with Delphine Seyrig at her most alluring and some Resnais effects of dislocation and repetition, it has a kind of soft-centred ironic romanticism which one hadn't associated with either Pinter or Losey.

After this parenthesis in London, the film moves into a confrontation between Dirk Bogarde and Stanley Baker which must rank among the best things either actor has done. It is played

out once more over the kitchen table, and it's an object lesson in direction to note just what the actors are given to do in this scene, to hold attention absorbed while the film's harshest ironies ricochet like bullets. In Stanley Baker's performance layers of protective covering are ripped away, as painfully as sticking-plaster, from the image of the television don, everyman's pundit, the unlovable man with the instinct for betrayal. The honours for sheer accomplishment and speed of reaction go to Dirk Bogarde and Vivien Merchant: the honours for playing against the grain to Stanley Baker.

It only occurred to me some time after seeing Accident that this must be the first major British film for quite a while in which no one is mad, helplessly inarticulate, a symbol of swinging London, or a secret agent. It's perhaps too much to hope that this compellingly articulate movie could start a trend.