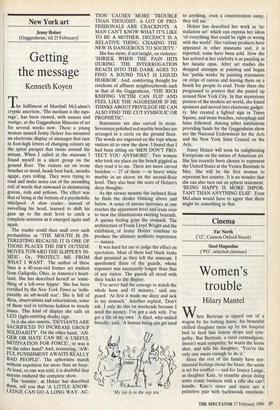 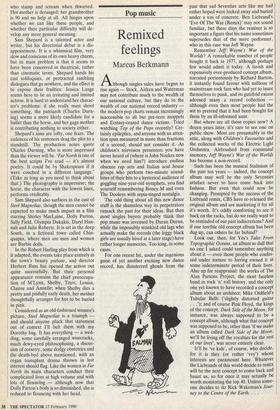 When Bertrum is tipped out of a wagon by his bolting horse, his beautiful citified daughter turns up by his hospital bed to feed him lemon drops and sym- pathy. But Bertrum, a rural curmudgeon, doesn't want sympathy; he wants the horse shot, and tells his daughter, `You're the only one mean enough to do it.'

Since the rest of the family have sen- timental feelings about the beast, the scene is set for conflict — and for Jessica Lange, as daughter Kate, to stumble about doing some comic business with a rifle she can't handle. Kate's sister and niece are a primitive pair with backwoods emotions, who stamp and scream when thwarted. Her mother is deranged; her grandmother is 90 and no help at all. All hinges upon whether we can like these people, and whether their particular difficulty will de- velop any more general meaning.

Sam Shepard is a talented actor and writer, but his directorial debut is a dis- appointment. It is a whimsical film, very slow and conscious of its own heavy charm, but its main problem is that it seems to have been conceived in theatrical, rather than cinematic terms. Shepard hands his cast soliloquies, or protracted rambling dialogues that go nowhere, and the effect is to expose their frailties: Jessica Lange seems here to be an irritating and limited actress. It is hard to understand her charac- ter's problems: if she really must shoot something, the patriarch (Charles Durn- ing) seems a more likely candidate for a bullet than the horse, and her gaga mother is contributing nothing to society either.

Shepard's aims are lofty, one fears. The cadences of his sentences drag the plot to a standstill. The production notes quote Charles Durning, who is more impressed than the viewer will be. 'Far North is one of the best scripts I've read — it's almost poetry. It could be by Shakespeare if it were couched in a different language.' (Take as long as you need to think about that.) The photography is impressive; the horse, the character with the fewest lines, performs creditably.

Sam Shepard also surfaces in the cast of Steel Magnolias, though the men cannot be expected to make much impact in a film starring Shirley MacLaine, Dolly Parton, Sally Field, Olympia Dukakis, Daryl Han- nah and Julia Roberts. It is set in the deep South, in a fictional town called Chin- quapin, where men are men and women are Barbie dolls.

In the Robert Harling play from which is it adapted, the events take place entirely in the town's beauty parlour, and director Herbert Russ has opened the action out quite successfully. But their personal appearance remains the chief preoccupa- tion of M'Lynn, Shelby, Truvi, Louisa, Clairee and Annelle; when Shelby dies a pretty and pitifully early death, her mother thoughtfully arranges for her to be buried in pink.

Considered as an old-fashioned women's picture, Steel Magnolias is a triumph — and should anyone pluck that statement out of context I'll belt them with my Dorothy bag. It has everything — a wed- ding, some carefully arranged wisecracks, much dewy-eyed philosophising, a discus- sion of corsetry, some dodgy obstetrics and the death-bed above mentioned, with an organ transplant drama thrown in lest interest should flag. Like the women in Far North its main characters conduct their complicated lives at high volume and with lots of flouncing — although now that Dolly Parton's body is so diminished, she is reduced to flouncing with her head.