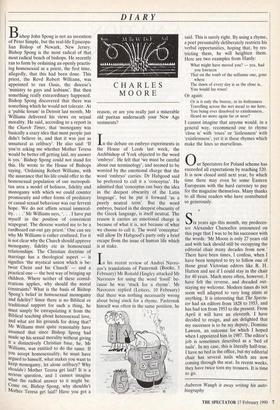 CHARLES MOORE Bishop John Spong is not an invention of Peter Simple, but the real-life Episcopa- lian Bishop of Newark, New Jersey. Bishop Spong is the most radical of that most radical bench of bishops. He recently ran to form by ordaining an openly practis- ing homosexual as a priest, the first time, allegedly, that this had been done. This priest, the Revd Robert Williams, was appointed to run Oasis, the diocese's 'ministry to gays and lesbians'. But then something really extraordinary happened. Bishop Spong discovered that there was something which he would not tolerate. At a 'public forum' in Detroit last month, Mr Williams delivered his views on sexual morality. He said, according to a report in the Church Times, that 'monogamy was basically a crazy idea that most people just didn't believe in, and that it was just as unnatural as celibacy'. He also said: 'If you're asking me whether Mother Teresa would be better off getting laid, my answer is yes.' Bishop Spong could not stand for this. He wrote to the House of Bishops saying, 'Ordaining Robert Williams, with the assurance that his life could offer to the homosexual population of our metropoli- tan area a model of holiness, fidelity and monogamy with which we could counter promiscuity and other forms of predatory or casual sexual behaviour was our fervent hope. We do not affirm sexual immoral- ity. . . .' Mr Williams says,'. . . I have put myself in the position of convenient scapegoat. The diocese wanted me to be a cardboard cut-out gay priest.' One can see Why Mr Williams is rather confused. For it is not clear why the Church should approve monogamy, fidelity etc in homosexual relationships. The Christian doctrine of marriage has a theological aspect — it signifies 'the mystical union which is be- twixt Christ and his Church' — and a Practical one — the best way of bringing up children. Where neither of these consid- erations applies, why should the moral constraints? What is the basis of Bishop Spong's belief in homosexual monogamy and fidelity? Since there is no Biblical or traditional support for such a thing, he must simply be extrapolating it from the Biblical teaching about heterosexual love, and what are his grounds for doing that? Mr Williams must quite reasonably have assumed that since Bishop Spong had made up his sexual morality without giving It a distinctively Christian base, he, Mr Williams, was entitled to do the same. If You accept homosexuality, he must have argued to himself, what makes you want to keep monogamy, let alone celibacy? Why Shouldn't Mother Teresa get laid? It is a serious question, and I cannot imagine What the radical answer to it might be. Come on, Bishop Spong, why shouldn't Mother Teresa get laid? Have you got a

reason, or are you really just a miserable old puritan underneath your New Age vestments?

In the debate on embryo experiments in the House of Lords last week, the Archbishop of York objected to the word 'embryo'. He felt that 'we must be careful about our terminology', and seemed to be worried by. the emotional charge that the word 'embryo' carries. Dr Habgood said he preferred to call it a `conceptus'. He admitted that `conceptus can bury the idea in the deepest obscurity of the Latin language', but he put it forward 'as a purely neutral term'. But the word embryo, buried in the deepest obscurity of the Greek language, is itself neutral. The reason it carries an emotional charge is because of what it is, not because of what we choose to call it. The word `conceptus' will allow Dr Habgood's party only a brief , escape riom the issue of human life which is at stake.

In his recent review of Andrei Navro- zov's translations of Pasternak (Books, 3 February) Mr Ronald Hingley attacked Mr Navrozov for using the word 'fossil' be- -cause he was 'stuck for a rhyme'. Mr Navrozov replied (Letters, 10 February) that there was nothing necessarily wrong about being stuck for a rhyme. Pasternak himself was often in the same position, he

said. This is surely right. By using a rhyme, a poet presumably deliberately restricts his verbal opportunities, hoping that, by res- tricting them, he will heighten them. Here are two examples from Hardy:

What might have moved you? — yea, had you foreseen That on the tomb of the selfsame one, gone where The dawn of every day is as the close is, You Would lay roses!

Or is it only the breeze, in its listlessness Travelling across the wet mead to me here, You being ever dissolved to existlessness, Heard no more again far or near?

I cannot imagine that anyone would, in a general way, recommend one to rhyme 'close is' with 'roses' or 'listlessness' with `existlessness', yet it is these rhymes which make the lines so marvellous.

0 ur Spectators for Poland scheme has exceeded all expectations by reaching 520. It is now closed until next year, by which time there may even be some Eastern Europeans with the hard currency to pay for the magazine themselves. Many thanks to all those readers who have contributed so generously.

Six years ago this month, my predeces- sor Alexander Chancellor announced on this page that I was to be his successor with the words: 'Mr Moore is only 27 -years old and with luck should still be occupying the editorial chair many decades from now.' There have been times, I confess, when I have been tempted to try to follow one of those great Victorian editors like R. H. Hutton and see if I could stay in the chair for 40 years. Much more often, however, I have felt the reverse, and dreaded out- staying my welcome. Modern times do not seem well adapted to very long stints at anything. It is interesting that The Specta- tor had six editors from 1828 to 1953, and has had ten from 1953 to the present. From April it will have an eleventh. I have decided to resign, and am delighted that my successor is to be my deputy, Dominic Lawson, an outcome for which I hoped when I appointed him in 1987. The editor's job is sometimes described as a 'bed of nails'. In my case, this is literally half-true. I have no bed in the office, but my editorial chair has several nails which are now coming through the seat. In recent weeks, they have twice torn my trousers. It is time to go.