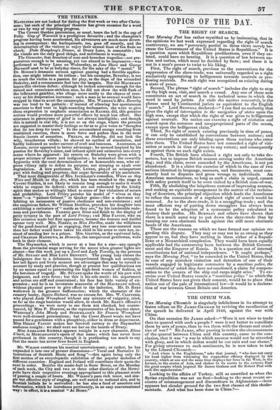 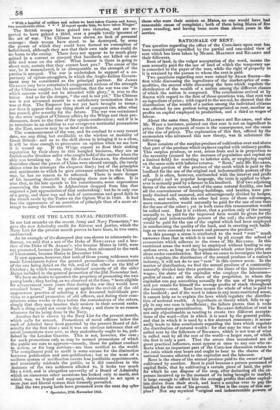 THE Morning Chronicle is singularly infelicitous in its attempt to fasten odium on Sir JAMES GRAHAM by reviving the recollection of the speech he delivered in April 1840, against the war with that occasion Sir JAMES asked—" Were it not wiser to trade China.

that occasion Sir JAMES asked—" Were it not wiser to trade China.

than to quarrel with such a people ? were it not better to conciliate them by arts of peace, than to vex them with the threats and cruel- ties of war ? " Sir JAMES, after passing in review the circumstances of the quarrel between China and this country, came to the con- clusion, that it was " a war in which success would not be attended with glory, and in which defeat would be our ruin and our shame." For giving utterance to such sentiments, he is now taken to task by the Liberal Chronicle— "And where is the Englishman," asks that journal, "who does not carry his head higher from witnessing the stupendous efficacy displayed by his country, which at one and the same time displays her force in the West, in the Levant, in the centre of Asia, and shakes to its centre in the extreme East the great empire which inspired Sir James Graham and Sir Robert Peel with such dire apprehension." Looking to the affairs of Turkey, still as unsettled as when the Syrian expedition was set on foot—looking to the most recent ac- counts of mismanagement and discomfiture in Afghanistan—there appears but slender ground for the two first clauses of this rhodo-, montade. And what has been done in China ?— " With a handful of soldiers and sailors we have taken Canton and Amoy, two considerable cities. • • • if report speaks true, we have taken Ningpo."

The British troops have gained two victories, and are re- ported to have gained a third, over a people totally ignorant of the art of war. The Chinese have shown no lack of personal courage : their troops have stood to be destroyed, by arms the power of which they could have formed no conception of beforehand, although they saw that their own rude arms could do no harm to the enemy. There does not appear to be much glory gained in a contest so unequal that hundreds are killed on one side and none on the other. What honour is there in going to shoot men, certain that they cannot hurt you ? The cause of the war, be it remembered, is as disreputable as the strength of the parties is unequal. The war is undertaken in support of a co- partnery of opium-smugglers, in which the Anglo-Indian Govern- ment may be considered as the principal partner. Sir Jamas GRAHAM may have entertained exaggerated notions of the strength of the Chinese empire; but his assertion, that the war was one " in which success would not be attended with glory," is true to the letter. And as for the danger, " the end is not yet." The Chinese war is not advanced nearer to a satisfactory termination than it was at first. The Emperor has not yet been brought to terms ; nor does it appear that any thing short of conquest can, after what has passed, give security for the future. The war was occasioned by the utter neglect of Chinese affairs by the Whigs and their pre- decessors, down to the time of the opium-confiscation ; and if it is to terminate in an addition to our overgrown territorial possessions in the East, success may be as fatal as defeat.

The commencement of the war, and its conduct to a very recent date, are any thing but creditable to the wisdom or morality of .Great Britain : and as to the skill shown in bringing it to a close, it will be time enough to pronounce an opinion when we see how

it is wound up. If the Whigs expect to float their sinking reputation by their share in this bungled business, they are as foolish as the drunken sailor who caught hold of the anchor when the ship was breaking up. As for Sir JAMES GRAHAM, his rhetorical flourishes about the power of China were absurd enough, (he rarely ,shines when he attempts the eloquent line); but of the principles and sentiments to which he gave utterance relative to the Chinese war, he has no reason to be ashamed. There is more danger of his incurring discredit by changing them now in office. It is true that, in his late speech to his constituents, some expressions concerning the crusade in Afghanistan dropped from him that .augured a just appreciation of that undertaking : but he is only one of a party, and there was sad lack of earnestness and good faith in the attack made by the Tories on the Opium War in 1840. It had less the appearance of an assertion of principle than of a mere at- tempt to annoy the Government.