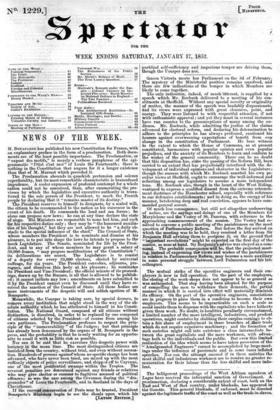 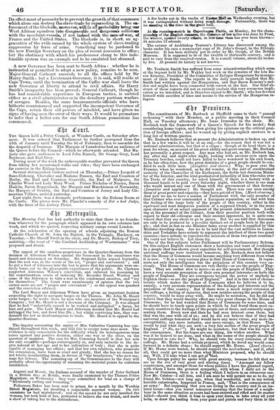 Page 1, 17 January 1852 — The belligerent proceedings of the West African squadron at Lagos
Close

The belligerent proceedings of the West African squadron at Lagos

have received the inferential sanction of Government. A. proclamation, declaring a considerable extent of coast, both on the East and West of that country, under blockade, has appeared in the Gazette. This general blockade, if enforced, must be directed against the legitimate traffic of the coast as well as the trade in slaves.

Its effect must of necessity be to prevent the growth of that commerce which alone can destroy the slave-trade by su.pmseding it. The ea- forcement of the blockade, moreover, will m all probaby tiring eorr West African squadron into disagreeable and dangers.s collisions with the merchant-vessel.,, if not indeed wit& the man-at-war,, e France and the United States. The blockade is, in short, an ag- gravation of the evils caused by the whole system of slave-trading suppression by force of arms. Something may be pardoned to the new Foreign Secretary on the plea of recent accession to office ; but the obstinacy with which his predecessor clung to this inde- fensible system was an example not to be emulated but shunned.