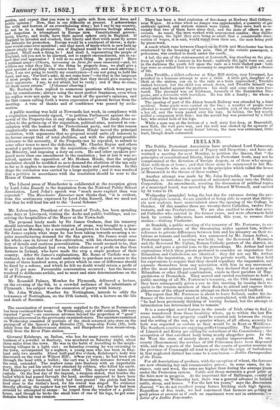 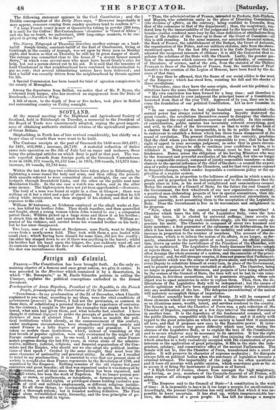 The Dublin Protestant Association have proclaimed Lord Palmerston a martyr to his discouragement of Popery and Despotism ; and have ad- vertised a meeting for next Monday, to petition the Queen, that "the principles of constitutional liberty, based on Protestant truth, may not be compromised at the dictation of foreign despots, or of those who sympa- thize with them at home ; and that those alone be summoned to her Ma- jesty's Councils who are devoted to the principles which called the house of Brunswick to the throne of these realms."

Another attempt was made by Mr. John Reynolds, on Tuesday and Thursday, to introduce the question of ministers'-money into the Dublin Corporation. An amendment, scouting the discussion of political topics at a municipal board, was moved by Sir Edward M'Donnell, and carried by 34 votes to 13.

Wednesday [sennight] being the last day for entrance during the pre- sent Collegiate session, we are gratified at being able to report that thirty- six new students have matriculated since the opening of the College in October. Of this number there are twenty-three Catholics, twelve Pro- testants, and one Presbyterian. We are also enabled to state that seve- ral Catholics who entered in the former years, and were afterwards held back by certain influences, have returned, this year, to resume their studies.—Gaiway Vindicator.

At Dundalk, a public meeting of the tenantry of Mr. Fortescue, to ex- press their abhorrence of the threatening notice against him, without reference to private differences between him and his tenantry on their re- lations as tenants and landlord, was summoned by Mr. James Arthur, a Protestant tenant. A meeting was held; but the Reverend J. Marmion and the Reverend Mr. Callan, Roman Catholic pastors of the district, at- tended, and gave a special tone to the proceedings. Mr. Arthur had used expressions which these priests professed to consider an imputation that Ribandism and Catholicism are identical : they did not say Mr. Arthur intended the imputation, as they knew his private worth, but they held his expressions to require that they should repudiate the imputation, and separate themselves from any association with him in any movement. After the most minute pastoral inquiry, they declared that no system of Ribandism or other illegal combination, exists in their parishes of Hag- gardstown or Dromisken. They moved and carried resolutions to hold a public meeting of all Mr. Fortescue's tenantry, on the 19th instant ; and they have subsequently given a cue to this meeting by issuing their re- quest to the tenants members of their flocks to attend and express their abhorrence of the alleged assassin attempt on their respected landlord. The report that Mr. Fortescue is about to leave Ireland, under the in- fluence of the terrorism aimed at him, is contradicted, with this addition : "he had been previously thinking of leaving Ireland, but the attempt at intimidation has determined him to remain."

It is a somewhat novel feature in the annals of Irish crime to find its scene transferred from those localities where, up to within the last taw years, neither life nor property coulebe counted safe between the rising and the setting of the sun, to a quarter where, of all others, security for both was regarded as certain as they would be in Kent or Middlesex. The Southern counties are enjoying perfect tranquillity. The Magistrates of Limerick and Kerry are calling for reductions of the Constabulary ; the occupation of that excellent body being nearly altogether gone. In the far West the state of society shows a similar improvement. In one county (Roscommon) the services of 100 Policemen have been dispensed with, and the reports of the business of the courts of quarter-sessions in the province of Connaught all tend to prove that the reign of turbulence in that neglected district has come to a conclusion.—Dublin Correspondent of the Times.

For all descriptions of produce, with the exception of wheat, the farmers are now obtaining fair and remunerative prices ; in some cases, for in- stance, oats and wool, the rates are higher than during the average years under the Protection system. Cattle and sheep maintain a good price at the fairs now in progress. At the important fair of Ballinagar, countrof Roscommon, on Wednesday last, there was a general advance in horned cattle, sheep, and horses. For the last ten years," says the Roscommon

Journal, "we do not recollect young horses fetching such high figures.

Regardless of free trade, we feel convinced that farmers are getting u good prices at present as if such an enactment were not in existence."—r Letter of a Dublin Free-trader. , The following statement appears in the Cork Constitution ; and the Dublin correspondent of the Daily News says, "However improbable it may appear, rumours coming from sundry quarters tend to confirm it"— " A large French vessel is now at Queenstown taking in powder (200 tons, it is said) for the Caffres ! Her Customhouse 'clearance' is 'Coast of Africa ' ; and she has on board, we understand, 5000 long-range muskets, to be em- ployed in giving effect to the powder."

The Newry Telegraph of Thursday describes another outrage on a land- bailiff. Joseph Grady, assistant-bailiff of the Earl of Charlemont, living at Camlough in the county of Armagh, was set upon by three men on Monday night, and beaten so that on Thursday he still ley in great danger of death. The outrage was committed close to the house of "a decent farmer named Berry,' in which were several men who must have heard Grady's cries for help, but not a person stirred out to his aid. It is said that the tenantry of Lord Charlemont in that neighbourhood have combined in determination to pay no rent; that several intimidating notices have been delivered ; and that a bailiff was recently driven from the neighbourhood by threats against his life.

A Special Commission has been issued for trial of agrarian conspirators in the county of Monaghan.

Among the departures from Belfast, we notice that of Mr. P. Byrne, the celebrated Irish harper, who has received an engagement from the Duke of Bueeleuch.--Northern'Whig.

A fall of snow, to the depth of four or ' five inches, took place in Belfast and surrounding country on Friday sennight.