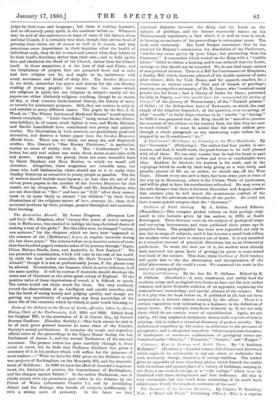 The Australian Abroad. By James Hingston. (Sampson Low and Co.)—Mr.

Hingston, after "twenty-five years of active occupa- tion in Melbourne, was enabled to indulge his long-cherished desire of making a tour of the globe." But like other men, he changed " ccelum, non animurn," for the chapters which we have here "appeared in the columns of the [Melbourne] Argus, at regular intervals during the last three years." The volume before us (a massive octavo of more than fonrhundred pagen) contains notes of his journey through "Japan, -China, Malaya, Sunda, Java, and Australia, to New Zealand." We are promised a continuation, which will take in the rest of the world- In style the book rather resembles Mr. Mark Twain's "Innocents Abroad," though it is not so professionally jocose, if the phrase may be allowed. Nevertheless, the humour, which is never deficient, is of the same quality. It will be curious if Australia should develope the same sort of literature as the other great colony of England. Of the positive value of these impressions of travel, it is difficult to speak. The writer would not claim much for them. But they evidently record the observations of an intelligent and candid traveller, who has the habit of seeing keenly and judging quickly, and though not getting any opportunity of acquiring any deep knowledge of the inner life of the countries which he visited, is quite worth listening to