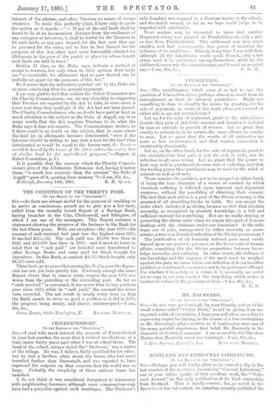 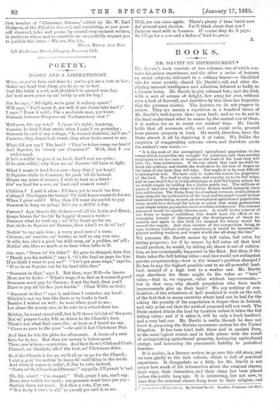 SIR,—As you were good enough, by your friendly notices of the small volume called " Obiter Dicta," to aid in giving it an unexpected width of circulation, I hope you will allow me a line to express my regret for having, in the course of a few observations on Mr. Browning's plays, written as if bankruptcy were one of the many painful experiences that befell Mr. Macready in his character of theatrical manager. I am assured by Sir Theodore Martin that Macready never was bankrupt.-1 am, Sir, &c.,

SCOTLAND AND CHRISTMAS LITERATURE. [To THE EDITOR. OF THE "SPECTATOR.".1 Sin,—Perhaps you will kindly allow us to correct a slip in the last number of the Spectator. In noticing " Current Literature," one of your critics speaks of that excellent work, the "Holyrood Annual," as the only publication of its kind emanating from Scotland. That is hardly correct ; for, as noted in the Spectator of the 3rd instant, we ourselves recently published the first number of "Christmas Gleams," edited by Mr. W. Earl Hodgson, of the Fifeshire journal, and containing, as you yourself observed, tales and poems by several very eminent writers, in justice to whom and to ourselves we respectfully request you to publish this letter.—We are, Sir, &c.,