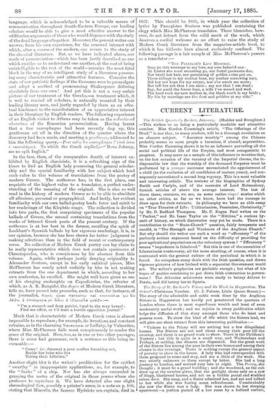 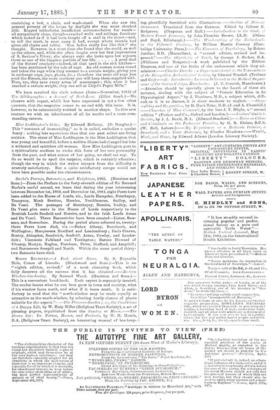 The British Quarterly Review, January. (Hodder and Stoughton.) —This strikes us as being a particularly readable and attractive number. Miss Gordon Cumming's article, "The Offerings of the Dead," is one that, to many readers, will be a thorough revelation on an obscure subject. "Ancestor worship" among the Chinese probably seems to most people a harmless, if absurd, superstition. Miss Gordon Cumming shows it to be an influence pervading all the social and political life of the Empire, and most antagonistic to progress. It may serve as a sample of this influence to mention that, on the last occasion of the vacancy of the Imperial throne, the indispensable law that the worship of the deceased Emperor must be performed by a younger successor necessitated the appointment of a child (to the exclusion of all candidates of mature years), and consequently necessitated a second long regency. This is a most valuable and interesting article. The reviews of the biographies of Sydney Smith and Carlyle, and of the memoirs of Lord Malmesbury, furnish articles of above the average interest. The last of these three, ventures, we see, on some rather risque stories which no other critics, as far as we know, have had the courage to draw upon for their extracts. In philosophy we have an able essay on "True Theories of Life : Utilitarianism, Pessimism, Christianity," by Mr. D. Radford Thompson. Mr. C. Kegan Paul writes on the "Psalter," and Mr. Isaac Taylor on the "Hittites," a curious bypath of history, on which discoveries may yet be made. There is a contribution to the " State-Church" question, fairly temperate and candid, in "The Strength and Weakness of the Anglican Church." Bat why should the writer use such a word as " effrontery " of the perfectly serious argument based on the difficulty of providing for poor agricultural populations on the voluntary system ? " Effrontery " means "impudence in falsehood." But this is one of the amenities of Liberationist controversy, all the more startling, of course, when it is contrasted with the general culture of the periodical in which it is found. An outspoken essay deals with the Irish question, and draws vigorous pictures of how Ireland with a separatist Government would act. The writer's prophecies are probable enough ; but what of his hopes of parties combining to put down Irish obstruction to government ? The Athenian aristocrats were ready to betray Athens to Persia, and did betray her to Sparta.

The Story of St. Saviour's Priory and its Work in Haggerston. The Orient's Christmas Number. (G-. J. Palmer, Little Queen Street.)— The story of the admirable and noble work done by the Anglican Sisters in Haggerston has hardly yet penetrated the quarters of London where there is most superfluous wealth and least of even moderately useful work ; and we rejoice in every publication which helps the diffusion of that story amongst those who do least and possess most. To show the kind of life which the Sisters lead, we will give one short extract from this interesting publication :— " Visitors to the Priory will see nothing but a few dilapidated houses. The Sisters are out and about among their poor till the evening, and there is no grand work to show. There is the Children's Nursery ; but this is quite in a small way, and Wednesdays and Fridays, at midday, the dinners are dispensed. But the great work of the Sisters lies among the poor in their own homes and among their classes in the evenings. There is nothing except the general aspect of poverty to show in the house. A lady who had corresponded with them proposed to come and stay, and see a little of the work. She was utterly unknown to them except by letter. She had a long .journey to London, and arrived very late at night. The Priory, she thought ; it most be a grand building ; and she wondered, as the cab drew up at the number given, that the gaslight shone only on a row of dingy, blackened houses, and not on a Gothic portal and Studded oaken door. She rang, and a Sister admitted her, and sat and talked to her while she was having some refreshment. Unmistakably she saw the Sister was a lady. She was shown to her sleeping apartment—a portion parted off a low room by a holland curtain,

containing a bed, a chair, and wash-stand. When she saw the general poverty of the house by daylight she was more shocked still. Ragged tablecloths, insufficient accommodation for meals— all scrupulously clean, though—cracked walls and ceilings, furniture which looked as if it had been bought off a stall in the street—and, to tell the truth, in most cases it had, except where friends had given old chairs and tables. ` Can ladies really live like this ?' she thought. However, in a short time she found that she could, as well as the others, and, while she often laughs over her first impressions of S. Saviour's Priory, she always says she looks upon her sojourn there as one of the happiest periods of her life A good deal of the Sisters' crockery—indeed, all that used in the sick kitchen— has been purchased by the sale of rags. An old woman comes round and takes the rags when they amount to a certain weight, giving you in exchange caps, jugs, plates, &c. therefore the more old rags you send the Sisters, the more crockery you will keep them supplied with. Then, too, they save every scrap of wastepaper ; this, when it has reached a certain weight, they can sell at Lloyd's Paper Mills."

We have received the sixth volume (June—November, 1S84) of The Bibliographer : a .Tournal of Book-Lore. (Elliot Stock.)—We observe with regret, which has been expressed in not a few other quarters, that the magazine comes to an end with this issue. It is, however, to be substantially revived in another shape. To this new venture we wish an inheritance of all its merits and a more commanding success.

Miss Luddington's Sister. By Edward Bellamy. (D. Douglas.)— This " romance of immortality," as it is called, embodies a quaint fancy : nothing less mysterious than that our past selves are living entities. The sister of Miss Luddington is the Miss Luddington that was young and beautiful, before a sudden illness had changed her into a withered and spiritless old woman. How Miss Luddington goes to a spiritualistic medium to evoke this form of her own personality from the past, and what comes of her going, we shall not say. To do so would be to spoil the surprise, which is certainly effective ; though the way in which the writer escapes from the difficulty is scarcely satisfactory. But a quite satisfactory escape would not have been possible under the circumstances.

Burke's Peerage, Baronetaye, and linightage, 1885. (Harrison and Sons.)—From the Preface to the forty-seventh edition of Sir Bernard Burke's useful annual, we learn that daring the year intervening between December 1st, 1883, and December 1st, 1884, eight Peers have been added to the House of Lords, viz., Lords Hampden, Strathspey, Tennyson, Monk Bretton, Herries, Northbourne, Sudley, and De Vesci. The peerages of Strathspey, Herries, Sudley, and De Vesci give seats in the House of Lords respectively to the Scottish Lords Seafield and 'ferries, and to the Irish Lords Arran and De Vesci. Three Baronetcies have been created—Lister, Bowman, and Samuelson. During the period above referred to, twentythree Peers have died, viz. :—Dukes Albany, Buccleuch, and Wellington; Marquesses Hertford and Londonderry ; Earls Craven, Bantry, Abingdon, Sandwich, Seafield, Arran, Cowley, and Lauderdale; Viscounts Falkland and Torrington ; Barons Howard of Glossop, Mostyn, Raglan, Farnham, Petre, Stafford, and Ampthill; and Baronesses Sempill and North. Within the same period thirtytwo Baronets have died.

Booss RECEIVED.—A Book about Roses. By S. Reynolds Hole, Canon of Lincoln. (Blackwood and Sons.)—This is an " eighth edition, revised," of a most charming book, which fully deserves all the success that it has obtained.-310fiern Window-Gardening. By Samuel Wood. (Houlston and Sons.)— This is a convenient hand-book. Each aspect is separately treated. The reader learns what be can best grow in town and country, what if his window faces north, and what if it faces south. It is satisfactory to read that the " north-window may be made equally as attractive as the south-window, by selecting hardy classes of plants suitable for the aspect."—The Pleasure-Garden ; or, the Conditions of a Happy Life, by W. Haig Miller (Religious Tract Society), a set of pleasing papers, republished from the Sunday at Home.—The Honey Bee : Its Nature, Homes, and Products, by W. H. Harris, B.A. (Religious Tract Society), an interesting manual of bee-keep ing, plentifully furnished with illustrations.—Outline of Historic Ornament. Translated from the German. Edited by Gilbert R. Redgrave. (Chapman and Hall.)—Introduction to the Study of Modern Forest Economy, by John Crombie Brown, LL.D. (Oliver and Boyd, Edinburgh.)—The Wood-cutting of the Netherlands in the Fifteenth Century, by William Martin Conway (Cambridge University Press.)—The Elements of Psychology, by Robert Jardine, B.D. (Macmillan), a " second edition, revised and improved."—The Objectivity of Truth, by George J. Stokes, B.A. (Williams and Norgate.)—A. work published by the Hibbert Trustees, and one of the fruits of the endowment which they administer.—Charles Darwin : a Paper contributed to the Transactions of the Shropshire Archwoloyical Society, by Edward Woodall. (Triibner and Co.)--Si.e Introductory Lectures Delirered in the Medical Department of the Owens College, Manchester. (J. E. Cornish, Manchester.) —Attention should be specially given to the fourth of these six lectures, dealing with the subject of "Female Education in its Physiological Aspect," by J. Thorburn, M.D., a subject which, difficult as it is to discuss, it is sheer madness to neglect.----Sleepwalking and Hypnotism, by D. Hack Take, 11.D. (S. and A. Churchill.) —Churches of West Cornwall, by the late J. T. Blight, a " second edition " (Parker and Co., Oxford and London.)--nsitors' Guide to Orvieto, by J. L. Bevir, M.A. (Edward Stanford.)--Notes on Crime and Criminals on the Peshawur Frontier, by G. R. Elsime, B.C.S. (W. Ball, Lahore.)--My Experiences as a Moderate Drinker, a Drunkard, and a Total Abstainer, by Charles Meadows.— Wealth, Work, and Want, by Edward Adams (London Literary Society).