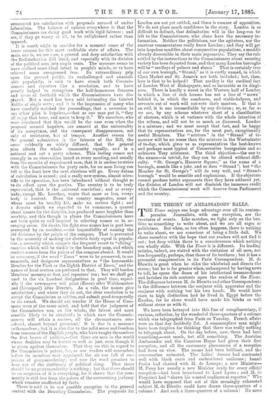 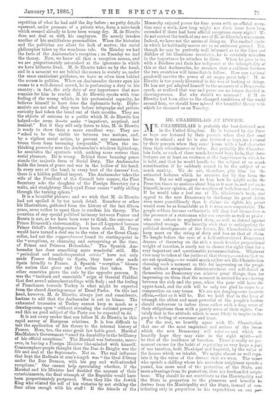 THE THEORY OF AMBASSADORS' BALLS.

THE Times enjoys one huge advantage over all its contemporaries. Journalists, with one exception, are the creatures of events. Like matches, we light only on the box. Give us something to write about, and we are all sages or politicians. But when, as too often happens, there is nothing to write about, we are conscious of being a little dull. We cheer ourselves with the hope that our readers will not find it out ; but deep within there is a consciousness which nothing can wholly stifle. With the Times it is different. Its leading articles, indeed, are visited with the visitation of all men, not less frequently, perhaps, than those of its brethren ; but it has a perennial compensation in its Paris Correspondent. M. de Blowitz is great when he rides the whirlwind and directs the storm; but he is far greater when, unhampered by having news to tell, he opens the doors of his intellectual treasure-house and lavishes its rich contents upon the readers of the Times. The difference between M. de Blowitz and other Correspondents is the difference between the conjuror with apparatus and the conjuror with nothing but his two hands. He would have risen to high distinction had he lived in Egypt before the Exodus, for he alone would have made his bricks as well without straw as with it.

We have been betrayed into this line of complimentary, if envious, reflection, by the wonderful three-quarters of a column which was telegraphed from Paris on Tuesday. French affairs were on that day decidedly flat. A commonplace man might have been forgiven for thinking that there was really nothing to telegraph about. On the day before, now, there had been something,—not much, but still something. The Austrian Ambassador and the Countess Hoyos had given their first reception, and all the customary phenomena of a reception had been on view. The rooms had been brilliant, and the conversation animated. The ladies' dresses had contrasted well with black coats and embroidered uniforms ; Ismail Pasha had chatted with M. de Lesseps ; a new Minister— M. Ferry has usually a new Minister ready for every official reception—had been introduced to Lord Lyons ; and M. de Freycinet had "shown his wonted readiness at repartee." Who would have supposed that out of this seemingly exhausted subject M. de Blowitz could have drawn three-quarters of a column I And such a three-quarters of a column! No mere repetition of what he had said the day before ; no petty details squeezed, under pressure of a private wire, from a note-book which seemed already to have been wrung dry. M. de Blowitz does not deal so with his employers. He merely invokes another of his multifarious personalities. When the historian and the politician are silent for lack of matter, the social philosopher takes up the wondrous tale. On Monday we had the facts of the Ambassador's reception ; on Tuesday we had the theory. Now, we know all that a reception means, and we are proportionately astonished at the ignorance in which we have hitherto lived. M. de Blowitz takes us by the hand, and in a moment we are behind the scenes in society as, under the same omniscient guidance, we bare so often been behind the scenes in politics. When an Ambassador throws open his rooms to a well-dressed crowd, he is performing a duty to his country ; in fact, the only duty of any importance that now remains for him to render. M. de Blowitz speaks with true feeling of the wrong which, in his professional capacity, he believes himself to have done the diplomatic body. Diplomatists are not what they were before telegraphs and private curiosity had taken the bread out of their mouths. They are the objects of sarcasm to a public which M. de Blowitz has helped—he owns it—to make " impatient, sceptical, and ironical." But if they will only listen to him, M. de Blowitz is ready to show them a more excellent way. They are " asked to be the visible tie between two nations, and, by a vigilant social action, to prevent any uneasiness between them from becoming irreparable." When the unthinking passer-by sees the Ambassador's windows lighted-up, he associates the spectacle with nothing more serious than social pleasure. He is wrong. Behind those beaming panes stands the majestic form of Social Duty. The Ambassador holds the issues of peace and war in the hollow of his band. In every note of the band, in every beat of the dancers' feet, there is a hidden political import. The Ambassador takes the wife of the President of the Council into supper, the First Secretary asks the daughter of the Foreign Secretary for a waltz, and straightway Meek-eyed Peace comes "softly sliding through the turning sphere."

It is a beautiful picture; and we wish that M. de Blowitz had not spoiled it by too much detail. Somehow or other his illustrations, gathered from the history of the last fifteen years, seem rather to upset than to confirm his theory. The cessation of any special political intimacy between France and Russia is not, as we have been wont to think, the outcome of Prince Bismarck's statesmanship. It has all happened because Prince Orloff's drawing-rooms have been closed. M. Ferry would have turned a deaf ear to the voice of the Great Chancellor, had not the rapprochement found its starting-point in the "receptions, so charming and enterprising at the time, of Prince and Princess Hohenlohe." The Spanish Ambassador has done something more wonderful still. His "periodical and much-frequented soirees" have not only made France friendly to Spain, they have also made Spain friendly to France. A Spanish " reception " blesses the nation that gives and the nation that takes. Two other countries prove the rule by the opposite process. It was the " taciturn and unsociable " reign of General Cialdini that first sowed misunderstandings with Italy ; and the feeling of Frenchmen towards Turkey is what might be expected from the closed drawing-rooms of Essad Pasha. On this last head, however, M. de Blowitz, always just and considerate, hastens to add that the Ambassador is not to blame. The exhausted treasuries of Turkey cannot keep so much as a drawing-room open " without revealing the national penury ;" and this no good subject of the Porte can be expected to do. It is not every reader that can follow M. de Blowitz in this rapid survey of European relations. It is less difficult to test the application of his theory to the internal history of France. Here, too, the same great law holds good. Marshal MacMahon's Government " owed its durability to the brilliancy of his official receptions." The Marshal was fortunate, moreover, in having a Foreign Minister like-minded with himself. Commonplace people thought that the Due de Broglie was the life and soul of the Septennate. Not so. The real influence that kept the Radicals at arm's-length was " the Quai d'Orsay under the Duc Decazes, with his gay and well-attended receptions." One cannot help speculating whether, if the Marshal and his Minister had doubled the amount of their entertainments, the final triumph of the Republic would have been proportionately postponed. Were they like the Jewish King who stinted the roll of his victories by not striking the floor often enough with his staff ? If the friends of the

Monarchy enjoyed power for four years with an official reception once a week, how long might not their lease have been extended if there had been official receptions every night ? We do not contest the truth of any one of M. de Blowitz's statements. Indeed, we have not the means of doing so. The exalted circler in which he habitually moves are to us unknown ground. But. though he may be perfectly well informed as to the likes and dislikes of his illustrious associates, he is certainly mistaken in the importance he attaches to them. When he goes to tea with a Duchess and finds her indignant at the inhospitality of this or that Ambassador, he assumes that a coldness between the two countries will immediately follow. How can national good-will survive the power of an angry great lady ? M. de Blowitz is too purely historical in his way of looking at things. He has not yet adapted himself to the manners of a Democratic epoch, or realised that war and peace are no longer decided in drawing-rooms. But why should we murmur ? If M de Blowitz had been alive to the changed conditions of the world around him, we should have missed the beautiful theory with which he charmed us on Tuesday.