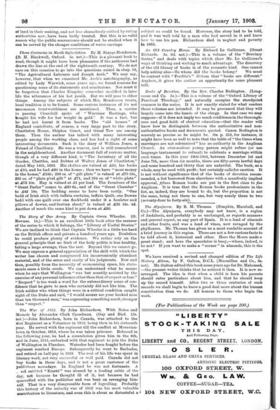 The Story of Our Army. By Captain Owen Wheeler. (G.

Newnes. ls.)—This is an excellent little book after the manner of the series to which it belongs, the "Library of Useful Stories." We are inclined to think that Captain Wheeler is a little too hard on the British officer and private a hundred years ago. Doubtless he could produce plenty of evidence. We rather rely on the general principle that no limb of the body politic is less healthy, taking a large average, than the rest. Beyond this we cannot go. We may express a general appreciation of the skill with which the writer has chosen and compressed his inconveniently abundant material, and of the sense and sanity of his judgments. Now and then, possibly from the necessity of economising space, his state- ments seem a little crude. We can understand what he means when he says that Wellington "was but scantily assisted by the exercise of any personal influence other than that of respect or fear." "Respect" is too weak a word for the extraordinary sense of con- fidence that he gave to men who certainly did not like him. The Irish soldier who when things were in a critical condition caught sight of the Duke and said, "I would sooner see your hooked nose than ten thousand men," was expressing something much stronger than "respect."