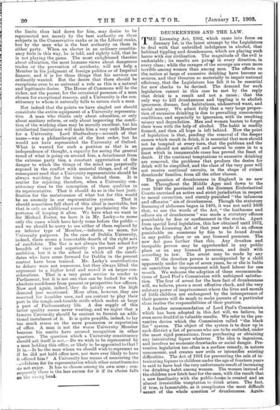 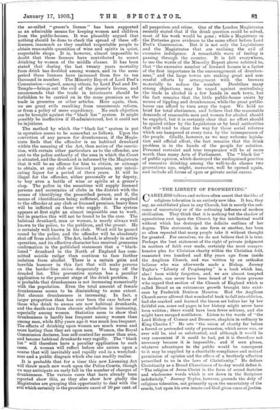 DRUNKENNESS AND THE LAW. T HE Licensing Act, 1902, which came

into force on January 1st, is the latest attempt by the Legislature to deal with that unbridled indulgence in alcohol, that habitual tippling and drunkenness, which are playing such havoc with our civilisation. The magnitude of the evil is undeniable ; its results are pategt in every direction, in every class ; while the ravages of the scourge are even more terrible among women than among men. The effects on the nation at large of excessive drinking have become so serious, and they threaten so materially to impair national efficiency, that the Legislature has felt it to be essential for new checks to be devised. The demand for such legislation cannot in this case be met by the reply that drink is a result and not a cause ; that the only way to kill drunkenness and tippling is to abolish ignorance, disease, foul habitations, undeserved want, and social misery. We admit fully that a very large propor- tion of excessive drinking is due to prevailing uneconomic conditions, and especially to ignorance, with its resulting misery and degradation. Men and women hasten to forget their woes with the help of alcohol. The habit is readily formed, and then all hope is left behind. Now the point of legislation is that, pending the removal of the deeper causes which result in drink, it is essential that men should not be tempted at every turn, that the publican and the grocer should not entice all and several to come in to a feast which in innumerable cases has proved the feast of death. If the continual temptations to excessive drinking are removed, the problems that produce the desire for drink will be simplified, and the class of the very poor will not receive continual recruits, in the shape of ruined drunkards' families, from all the other classes.

The question of drunkenness in England is no new one. Throughout the Middle Ages and down to the year 1640 the provincial and the diocesan Ecclesiastical Courts exercised an active and strict jurisdiction in respect to moral correction, and sternly punished "the infamous and offensive" sin of drunkenness. Though the statutory licensing of alehouses began in 1495, it was not until 1606 that, to use the words of the Act, "the loathsome and odious sin of drunkenness" was made a statutory offence punishable by fine or confinement in the stocks. Apart from special local legislation, this law obtained until 1872, when the Licensing Act of that year made it an offence punishable on summons by fine to be found drunk in any public place or on any licensed premises. The new Act goes farther than this. Any drunken and incapable person may be apprehended in any public place or on any licensed premises, and dealt with according to law. The arrest may. be made by any one. If the drunken person is accompanied by a child apparently under the age of seven years, he or she is liable on conviction to imprisonment with hard labour for one mouth. We welcome the adoption of these recommenda- tions of Lord Peel's Commission with unfeigned satisfac- tion. The fear of arrest for the bare fact of drunkenness will, we believe, prove a most effective check, and the very salutary power of imprisonment where the lives and morals of little children are endangered by the intemperance of their parents will do much to make parents of a particular class realise the responsibilities of their position.

A further recommendation of Lord Peel's Commission which has been adopted in this Act will, we believe, be even more fruitful in valuable results. We refer to the pre- ventive device which the Commission called "the black list" system. The object of the system is to draw up in each district a list of persons who are to be excluded, under the most rigid precautions, from purchasing or obtaining any intoxicating liquor whatever. The idea is ingenious, and involves no economic drawbacks or social danger. Pre- ventive legislation too often is a surface remedy, in nature uneconomic, and creates new evils or intensifies existing difficulties. The Act of 1901 for preventing the sale of in- toxicating liquors to children under the age of fourteen years is said to have had the very unfortunate result of increasing the drinking habit among women. The women instead of the children now fetch beer for the men, with the result that a new familiarity with the public-ho4e is created and an almost irresistible temptation to drink arises. The fact, if true, is lamentable, as it complicates the most difficult aspect of the whole question of drunkenness. Again. the so-called "grocer's license" has been supported as an admirable means for keeping women and children from the public-houses. It was plausibly argued that nothing should be done to check the spread of these off- licenses, inasmuch as they enabled respectable people to obtain reasonable quantities of wine and spirits in quiet, respectable shops. It is, however, almost impossible to doubt that these licenses have contributed to secret drinking by women of the middle classes. It has been stated that during the last twenty years mortality from drink has doubled among women, and in the same period these licenses have increased from five to ten thousand in number. The Minority Report of Lord Peel's Commission—signed, among others, by Lord Peel and Dr. Temple—brings out the evil of the grocer's license, and recommends that the trade in intoxicants should be forbidden to be carried on in the same premises as the trade in groceries or other articles. Here again, then, we see great evils resulting from uneconomic reform, or from a policy of mere expediency. No such objection can be brought against the "black list" system. It might possibly be ineffective if ill-administered, but it could not be injurious.

The method by which the "black list" system is put in operation seems to be somewhat as follows. Upon the conviction of any person for drunkenness, if the Magis- trate finds that the offender is an habitual drunkard within the meaning of the Act, then notice of the convic- tion, with certain other particulars as to the offender, are sent to the police authority of the area in which the Court is situated, and the drunkard is informed by the Magistrate that it will be an offence for him to obtain, or attempt to obtain, at any club or licensed premises, any intoxi- cating liquor for a period of three years. It will be illegal for the offender, either personally or by deputy, to buy even a bottle of wine or spirits at a grocer's shop. The police in the meantime will supply licensed persons and secretaries of clubs in the district with the means of identifying the proscribed person, and if, the means of identification being sufficient, drink is supplied to the offender at any club or licensed premises, heavy fines will be inflicted on those who supply it. The system appears at first sight an almost impossible one to work, but in practice this will not be found to be the case. The habitual drunkard, man or woman, is nearly always well known to the police, to the publican, and the grocer. He is certainly well known in his club. Word will be passed round by the police, and the offender will be absolutely shut off from alcohol. The Act, indeed, is already in active operation, and its effective character has received gruesome confirmation in the published statement that a " black- listed " drunkard in the North of England has com- mitted suicide rather than continue to face further isolation from alcohol. There is a certain grim and horrible humour in this fact that will make persons on the border-line strive desperately to keep off the dreaded list. This preventive system has a peculiar application to the present stage of the drink problem. It is probable that drunkenness is not increasing numerically with the population. Even the total amount of female drunkenness seems to be diminishing to some extent. But chronic drunkenness is increasing. In fact, a larger proportion than has ever been the case before of those who drink to excess are now habitual drunkards, and the death-rate from chronic alcoholism is increasing, especially among women. Statistics seem to show that drunkenness is hardly less frequent among women than among men, while fifty years ago it was much less frequent. The effects of drinking upon women are much worse and more lasting than they are upon men. Women, the Royal Commission declares, lose self-control far sooner than men, and become habitual drunkards very rapidly. The "black list" will therefore have a peculiar application to such cases. A woman will reflect before she enters upon a course that will inevitably and rapidly end in a wretched- ness and a public disgrace which she can readily realise.

It is probable that for a time this new Licensing Act will throw much new work upon the Police Courts, though we may anticipate an early fall in the number of charges of drunkenness. The various cases that have already been reported show this, as they also show how gladly the Magistrates are grasping this opportunity to deal with the evil which certainly is the proximate cause of 50 per cent. of all pauperism and crime. One of the London Magistrates recently stated that if the drink question could be solved, most of his work would be gone ; while a Magistrate in the Potteries gave evidence to the same effect before Lord Peel's Commission. But it is not only the Legislature and the Magistrates that are realising the evil of excessive indulgence. A remarkable wave of feeling is passing through the country. It is felt everywhere, to use the words of the Minority Report above referred to, that "the excessive number of licensed houses is a factor of the first importance in the encouragement of drunken- ness," and the large towns are making great and suc- cessful efforts by arrangement with the brewers materially to reduce the number. Doubtless many strong objections may be urged against centralising the trade in alcohol in a few hands in each town, but the fact remains that the little public-house exists by means of tippling and drunkenness, while the great public- house can afford to turn away the toper. We hold no brief for total abstinence, and believe that the reasonable demands of reasonable men and women for alcohol should be supplied, but it is certainly clear that no effort should be spared either by the Legislature or by local authorities that will tend to clear the way for those social reforms which are hampered at every turn by the intemperance of the people. Gladly, however, as we may welcome legisla- tion and official effort, the fact remains that the drink problem is in the hands of the people for solution. Personal restraint and true temperance will be of more worth than many Acts of Parliament. The "black list" of public opinion, which destroyed the undisguised practice of excessive drinking among the well-to-do classes two generations ago, might, moreover, well be opened again, and include all forms of open or private social excess.