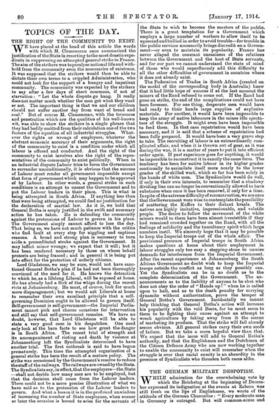 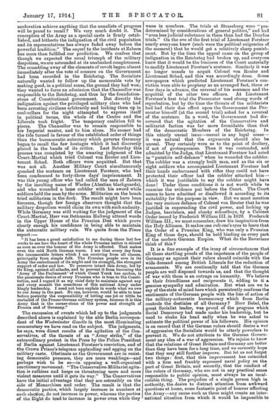 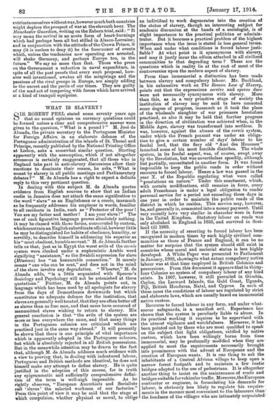 WHILE admiration for the overwhelming vote by which the Reichstag at the beginning of Decem- ber expressed its indignation at the events at Zabern was still fresh on the lips of Englishmen, we wrote of the attitude of the German Chancellor : " Every moderate man in Germany is outraged. But will common-sense and moderation achieve anything that the annalists of progress will be proud to recall ? We very much doubt it. The conception of the Army as a special caste is firmly estab- lished, and hitherto the indignation of the civil population and its representatives has always faded away before the powerful tradition." The sequel to the incidents at Zabern has more than fulfilled our prediction. We confess that though we expected the usual triumph of the military despotism, we are astounded at its unabashed completeness. The crumbling away of the elements of revolt began almost immediately after the vote of censure on the Government had been recorded in the Reichstag. The Socialists naturally wanted to follow up the memorable vote by making good, in a political sense, the ground they had won; they wanted to force an admission that the Chancellor was responsible to the Reichstag, and thus lay the foundation- stone of Constitutional government. But directly the indignation against the privileged military class who had been arresting civilians arbitrarily and locking them up in coal-cellars for the night attempted to express itself in political terms, the whole of the Centre and the Liberals took fright. The temporary coalition fell to pieces. The Chancellor was to remain responsible to his Imperial master, and to him alone. No sooner had the tide turned in favour of the established order of things than the bureaucratic autocracy which governs Germany began to recall the few hostages which it had discreetly placed in the hands of its critics. Last Saturday this process was completed by the amazing judgment of the Court-Martial which tried Colonel von Reuter and Lieu- tenant Schad. Both officers were acquitted. But that was not all. Another Military Court simultaneously quashed the sentence on Lieutenant Forstner, who had been condemned to forty-three days' imprisonment. It was this young officer who had called the men of Zabern by the insulting name of Washes (Alsatian blackguards), and who wounded a lame cobbler with his sword while soldiers held the man by the arms. Militarism on the bench tried militarism in the dock. The result might have been foreseen, though few foreign observers thought that the military despotism would claim its own with such audacity. While Germany was still waiting for the judgment of the Court-Martial, Herr von Bethmann Hollweg uttered words in the Upper House of the Prussian Diet which prove clearly enough his confidence in being able to maintain the autocratic military rule. We quote from the Times report "It has been a great satisfaction to me during these last few weeks to see how the heart of the whole Prussian nation is stirred as soon as ever the honour of the Army is affected. That makes even the cold North German warm. I see that every day from the innumerable letters which I am receiving from all classes, principally from simple folk. The Prussian people sees in its Army the embodiment of its might and its strength, the strongest support of order and law. To preserve intact this Army, led by its King, against all attacks, and to prevent it from becoming the 'Army of the Parliament' of which Count Torok has spoken, is the passionate desire of every Prussian who is true to the Consti- tution, and I regard it as my chief duty to maintain against any and every assault the soundness of this national Army under kingly leadership. I need not here explain in words what we owe to our Army in the past. No one, however would be able to bear before posterity the responsibility of letting one jot or tittle be curtailed of the Prusse-German military system, because it is this Army that is the corner-stone of the power and strength of Prussia and of Germany."

The succession of events which led up to the judgments described above is explained by the able Berlin correspon- dent of the Westminster Gazette in the most illuminating commentary we have read on the subject. The judgments, be says, were direct results of the agitation of the Con- eervatives, of the threats of an "Army strike," of the extraordinary protest in the Press by the Police President of Berlin against Lieutenant Forstner's conviction, and of the Crown Prince's telegram applauding and egging on the military caste. Obstinate as the Government are in resist- ing democratic, pressure, they are mere weaklings—and perhaps wish to be so—in opposing a well-organized reactionary movement. " The Conservative-Militarist agita- tion is ruthless and keeps on threatening more and more violent measures until it gets its way." The Conservatives have the initial advantage that they are ostensibly on the side of Monarchism and order. The result is that the democratic parties, which largely increase in numbers at each election, do not increase in power, whereas the parties of the Right do fend to increase in power even while they wane in numbers. The trials at Strassburg were " pre- determined by considerations of general politics," and had "even less judicial substance in them than had the Dreyfus trials." On the eve of the first trial of Lieutenant Foretner nearly everyone knew (such were the political exigencies of the moment) that he would get a relatively sharp punish- ment. But by the time the appeal came on the group of indignation in the Reichstag had broken up, and everyone knew that it would be the business of the Court materially to modify Lieutenant Forstner's sentence. Similarly it was no longer unsafe to acquit Colonel von Reuter and Lieutenant Schad, and this was accordingly done. Some newspapers which predicted Lieutenant Forstner's con- viction were able to prophesy as an arranged fact, three or four days in advance, the reversal of his sentence and the acquittal of the other two officers. At Lieutenant Forstner's first trial the Prosecutor used strong words of reprobation, but by the time the threats of the militarists bad had their due effect upon the Government the Pro- secutor himself (at the second trial) asked for a reversal of the sentence. In a word, the Government had dis- covered that the agitation of the Conservative and militarist faction was far more formidable than that of the democratic Members of the Reichstag. In this utterly unreal issue—unreal in any legal sense— it was natural that the arguments should also be unreal. They certainly were so to the point of drollery, if not of grotesqueness. Thus it was contended, and admitted by the Judge, that Lieutenant Forstner had acted in "putative self-defence" when he wounded the cobbler. The cobbler was a strongly built man, and as the six or eight soldiers who accompanied Lieutenant Foretner had their hands embarrassed with rifles they could not have protected their officer had the cobbler attacked him— which it was justifiable to say the cobbler might have done ! Under these conditions it is not worth while to examine the evidence put before the Court. The Court seems to have admitted or disallowed it according to its suitability for the purpose in view. But we must mention the very curious defence of Colonel von Reuter that he was justified in superseding the civil power, and locking up Judges, barristers, and cheeky schoolboys, by a Cabinet Order issued by Frederick William III. in 1820. Frederick William III., we must remember, drew his inspiration from the Holy Alliance. It makes one rub one's eyes to learn that the Order of a Prussian King, who was only a Prussian King of those days, should be held binding on every part of the modern German Empire. What do the Bavarians think of this ?

It is a fine example of the irony of circumstances that all these startling proofs of the impotence of the people of Germany as against their rulers should coincide with the wide demand among British Liberals for the reduction of armaments. We are continually told that the German people are well disposed towards us, and that the thought of war with them is an outrage on humanity. We believe in their friendliness and reciprocate it, adding to it a genuine sympathy and admiration. But what are we to say of the state of mind here which persistently confuses the sentiments of the German people with the line of action of the military-autocratic bureaucracy which from Berlin controls the destinies of all Germany ? Herr Bebel, the great Socialist leader, was proud of the progress which Social Democracy had made under his leadership, but he used to shake his head sadly when he was asked to estimate the political power of his followers. His opinion is on record that if the German rulers should desire a war of aggression the Socialists would be utterly powerless to prevent it. We do not attribute to the German Govern- ment any idea of a war of aggression. We rejoice to know that the relations of Great Britain and Germany are better than they have been for a long time, and we earnestly hope that they may still further improve. But let us not forget two things: first, that this improvement has coincided with a firm and frankly expressed naval policy on the part of Great Britain, and secondly, that the conduct of the rulers of Germany, who are not in any practical sense responsible to public opinion, must always be an incal- culable thing. The prejudice of a single person high in authority, the desire to distract attention from awkward questions at home, some fantastic point of honour affecting the Army—any cause such as these might create an inter- national situation from which it would be impossible to

extricate ourselves w ithout war, however much both countries might deplore the prospect of war at the eleventh hour. The Manchester Guardian, writing on the Zabern trial, said : " It may mean the revival in an acute form of heart-burnings which had perhaps been all but stilled in Alsace-Lorraine; and in conjunction with the attitude of the Crown Prince, it may (it is useless to deny it) be the forerunner of events which, unless the tendencies now operating are arrested, will shake Germany, and perhaps Europe too, in the futans." We say no more than that. Those who press on the Government a reduction in naval expenditure, in spite of all the past proofs that every such proposal, how- ever well intentioned, awakes all the misgivings and the passions of the rival groups in Europe, are simply adding to the unrest and the perils of our times. They are guilty of the mad act of tampering with forces which have arrived at a kind of tranquil equipoise.