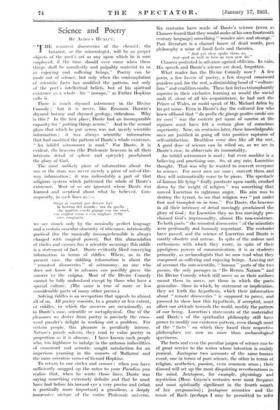 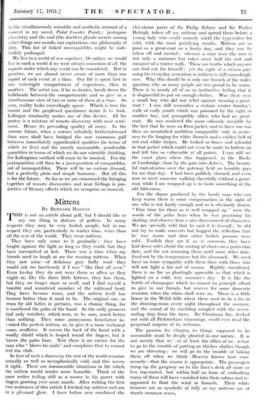 THE remotest discoveries of the chemist, the botanist, or the mineralogist, will be as proper objects of the poet's art as any upon which he is now employed, if the time should ever come when these things shall be manifestly and palpably material to us as enjoying and suffering beings." Poetry can be Made out of science, but only when the contemplation of scientific facts has modified the pattern, not only of the poet's intellectual beliefs, but of his spiritual existence as a whole— his " inseape," as Father Hopkins calls it.

There is much rhymed astronomy in the Divine Comedy ; but it is never, like Erasmus Darwin's rhymed botany and rhymed geology, ridiculous. Why is this ? In the first place, Dante had an incomparable capacity for" putting things across.". And in the second place that which he put across was not merely scientific information ; it was always scientific information that had modified the pattern of Dante's whole existence. " An infidel astronomer is mad." For Dante, it is evident, the heavens (the Ptolemaic heavens in all their intricate detail of sphere and epicycle) proclaimed the glory of God.

The most unlikely piece of information about the sun or the stars was never merely a piece of out-of-the- way information ; it was indissolubly a part of that religious system which patterned the whole of Dante's existence. Most of us are ignorant where Dante was learned and sceptical about what he believed. Con- sequently, in such lines as :— Surge ai mortali per diverse foci la lucerna del mondo ; ma da quells eho quattro cerchi giunge con tre croci, COR miglior corso o con migliore stella esco congiunta, we are struck only by the musically perfect language and a certain oracular obscurity of utterance, intrinsically poetical (for the musically incomprehensible is always charged with magical power). But this abracadabra of circles and crosses has a scientific meaning; this riddle is a statement of fact. Dante evidently liked conveying information in terms of riddles. Where, as in the present case, the riddling information is about the "remotest discoveries" of astronomy, no one who does not know it in advance can possibly guess the answer to the enigma. Most of the Divine Comedy cannot be fully understood except by those who have a special culture. (The same is true of more or less considerable parts of many other poems.) Solving riddles is an occupation that appeals to almost all of us. All poetry consists, to a greater or less extent, of riddles, to which the answers are occasionally, as in Dante's case, scientific or metaphysical. One of the Pleasures we derive from poetry is precisely the cross- word puzzler's delight in working out a problem. For certain people, this pleasure is peculiarly intense. Nature's puzzle solvers, they tend to value poetry in proportion as it is obscure. I have known such people who, too highbrow to indulge in the arduous imbecilities of crossword and acrostic, sought satisfaction for an imperious yearning in the sonnets of Mallarme and the more eccentric verses of Gerard Hopkins.

To return to our circles and crosses : when you have sufficiently mugged up the notes to your Paradiso you realize that, when he wrote those lines, Dante was saying something extremely definite and that be must have had before his inward eye a very precise and (what is poetically more important) a grandiose, a deeply iinnressive picture of the entire Ptolemaic universe. Six centuries have made of Dante's science (even as Chaucer feared that they would make of his own fourteenth century language) something " wonder nice and strange." Past literature is a charnel house of dead words, past philosophy a mine of fossil facts and theories. " And yet they spake them so, And sped as well in love as men now do.", Chaucer protested in advance against oblivion. In vain. His speech and Dante's science are dead, forgotten.

What reader has the Divine Comedy now ? A few poets, a few lovers of poetry, a few strayed crossword puzzlers and, for the rest, a diminishing band of " culture- fans " and erudition-snobs. These last feel as triumphantly superior in their exclusive learning as would the sOCial snob if, alone of all his acquaintance, he had met the Prince of Wales, or could speak of Mr. Michael Arlen by his pet name. Even in Dante's day the cultured few who knew offhand that " da quella che giunge quattro cerchi-con ire croci" was the esoteric pet name of sunrise at the equinox must have felt a certain glow of conscious superiority. Now, six centuries later, these knowledgeable ones are justified in going off into positive raptures of self-satisfaction. Deathless verse dies like all the rest. A good dose of science can be relied on, as we see in Dante's case, to abbreviate its immortality.

An infidel astronomer is mad ; but even madder is a believing and practising one. So, at any rate, Lucretius thought. That was why he wanted to convert everyone to science. For most men arc sane ; convert them and they will automatically cease to be pious. The spectacle of human life lying " foully prostrate upon earth, crushed down by the weight of religion" was something that moved Lucretius to righteous anger. His aim Was to destroy the tyrant, to see that religion was "put under foot and trampled on in turn." For Dante, the heavens in all their intricacy of detail movingly proclaimed the glory of God ; for Lucretius they no less movingly pro- claimed God's impersonality, almost His non-existence. To both poets" the remotest discoveries "of the scientists were profoundly and humanly important. The centuries have passed, and the science of Lucretius and Dante is mostly obsolete and untrue. In spite of the ardour and enthusiasm with which they wrote, in spite of their prodigious powers of communication, it is as students primarily, as archaeologists that we now read what they composed as suffering and enjoying beings. Leaving out of account the non-scientific, " human " parts of the two. poems, the only passages in "De Rerum Natura " irid the Divine Comedy which still move us as their authors meant them to move, are those in which the poets generalize—those in which, by statement or implication, they set forth the hypothesis, which their information about "remote discoveries" is supposed to prove, and proceed to show how this hypothesis, if accepted, mist affect our attitude towards the world, modify the pattern of our being. Lucretius's statements of the materialist and Dante's of the spiritualist philosophy still haute power to modify our existence pattern, even though most of the " facts " on which they based their respective philosophies arc now no more than archaeological specimens.

The facts and even the peculiar jargon of science can be of great service to the writer whose intention is mainly ironical. Juxtapose two accounts of the same hunian event, one in terms of pure science, the other' in terms of religion, aesthetics, passion, even common sense ; their discord will set up the most disquieting reverberations in the mind. Juxtapose, for example, physiology and mysticism (Mme: Guyon's ' ecstasies were most frequent and most spiritually significant in the fourth month Of her pregnancies); juxtapose acoustics and the music of Bach (perhaps I May be permitted to refer to the simultaneously scientific and aesthetic account of a concert in my novel, Point Counter Point); juxtapose chemistry and the soul (the ductless glands secrete among other things our moods, our aspirations, our philosophy of fife). This list of linked incompatibles might be inde- finitely prolonged.

We live in a world of non sequiturs. Or rather, we would live in sucha world if we were always conscious of all the aspects under which any event can be considered. But in practice, we are almost never aware of more than one aspect of each event at a time. Our life is spent first in one watertight compartment of experience, then in another. The artist can, if he so. desires, break down the bulkheads between the compartments and so give us a simultaneous view of two or more of them at a time. So seen, reality looks exceedingly queer. Which is how the ironist and the perplexed questioner desire it to look. Laforgue constantly makes use of this device. All his poetry is a mixture of remote discovery with near senti- ment. Hence its pervading quality of irony. In the remote future, when a science infinitely better informed than ours shall have bridged the now enormous gulf between immediately apprehended qualities (in terms of which we live) and the merely measurable, ponderable quantities in terms of which we do our scientific thinking, the Laforguian method will cease to be ironical, For the juxtaposition will then be a juxtaposition of compatibles, not of incompatibles. There will be no curious discord, but a perfectly plain and simple harmony. But all this is for the future. So far as we are concerned the bringing together of remote discoveries and near feelings is pro- ductive of literary effects which we recognize as ironical.