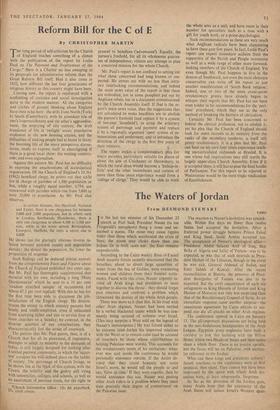 Reform Bill for the C of E

By CHRISTOPHER MARTIN HE long period of self-criticism by the Church I of England reaches something of a climax with the publication of the report by Leslie Paul on The Payment and Deployment of the Clergy.* Here is a Charter no less sweeping in its proposals for administrative reform than the

Great Reform Bill itself. Had it also come in 1832, how different the last four generations of religious history in this country might have been. Coming now, the report is reinforced with a scaffolding of statistics and social investigation quite in the modern manner. All the categories and cliches of present thinking about England have their echo here : the drift from North (York) to South (Canterbury), with its attendant tale of one's impoverishment and the other's aggrandise- ment; the emptying of city centres; the drab transience of life in 'twilight' areas; population explosion in the new housing estates, and the difficulties of making people feel at home in them; the booming life of the more prosperous dormi- tories, ready to express, itself in churchgoing if there is a good local show; the waning country- side; and even regionalism.

Against this pattern Mr. Paul has no difficulty in exposing the anachronisms of ecclesiastical organisation. Of the Church of England's 10,361 (1962) beneficed clergy, he points out that 4,630 are in charge of parishes of 1,500 population or less, while a roughly equal number, 4,794, are concerned with parishes which rise from 5,000 to over 20,000 in population. As Mr. Paul also observes, . . . in certain dioceses, like Hereford, Norwich and Exeter, there is one clergyman for between 1,000 and 2,000 population, but in others such as London, Southwark, Manchester, there is only one clergyman to about 4,500 to 5,500 per- sons, while in the worst served, Birmingham, . Liverpool, Sheffield, the ratio is about one to 6,000.

He shows too the glaringly obvious inverse re- lation between pastoral results and population density: the denser the population, the lower the proportion of response.

Such findings can be deduced almost entirely from the comprehensive Facts and Figures about the Church of England published two years ago.

But Mr. Paul has thoroughly supplemented that material with his own, including a long 'Main Questionnaire' which he sent to a 10 per cent

`random stratified sample' of incumbents (of whom 87.3 per cent replied). With this he has for

the first time been able to document the job- satisfaction of the English clergy. He demon- strates the extent to which country parsons feel lonely and under-employed, even if exhausted from scurrying hither and yon to service four or more churches on a Sunday; by contrast, in the drearier quarters of our conurbations, they characteristically feel the strain of overwork.

The picture that Mr. Paul paints, then, is of a Church that for all its piecemeal, if impressive, attempts to adapt its ministry to the demands of today, is still largely designed for looking after a settled pastoral community, in wbich the `squar- son' occupies his well-defined place on the ladder of society. The patronage of Church livings, as he shows, lies at the thick of this system, with the Crown, the nobility and the gentry still vying with universities, colleges, and schools, as well as an assortment of partisan trusts, for the right to *Church Information Office: 12s. 6d. paperback, 25s, cloth covers. present to benefices (`advowsons'). Equally, the parson's freehold, for all its wholesome guaran- tee of independence, vitiates any attempt to plan a concerted mission for the whole Church.

Mr. Paul's report is not confined to setting out what those concerned had long known or sus- pected. He comes out with no less than sixty- two interlocking recommendations, and indeed the main news value of the report is that these are embodied, not in some pamphlet put out by Anglican rebels, but in a document commissioned by the Church Assembly itself. If that is the re- port's main news value, then the suggestions that are calculated to make headlines are to abolish the parson's freehold (and replace it by a system of ten-year 'leasehold'), to scrap the arbitrary system of patronage and payment and replace it by a regionally organised 'open' system of re- muneration and preferment, and to introduce the direction of the clergy in the first five years of their ministry.

The report makes a complementary plea for major parishes, particularly suitable for places of about the size of Colchester or Shrewsbury, in which the rural dean would become a 'bishop-in- little' and the other incumbents and curates of more than three years experience would form a 'college of clergy.' They would be able to work the whole area as a unit, and have room in their number for specialists, such as a man with a gift for youth work, or a priest-psychologist.

Such recommendations as these are very much what Anglican radicals have been clamouring to have these past few years. In fact, Leslie Paul's report can expect immediate acclaim from the supporters of the Parish and People movement as well as a wide, range of other more forward- looking members of the Church of England. Yet even though Mr. Paul happens to live in the diocese of Southwark, not even the most obdurate conservative can write off his report as just another manifestation of 'South Bank religion'. Indeed, one or two of the more avant-garde revolutionary priests have already begun to whisper their regrets that Mr. Paul has not been even bolder in his recommendations for the 'part- time' priesthood, which they see as the only method of breaking the barriers of clericalism.

Certainly Mr. Paul has been concerned to bolster the clerical profession, not to abolish it; yet his plea that the Church of England should look for more recruits to its ministry from the ranks of the secondary moderns, is itself still pretty revolutionary. It is a plea that Mr. Paul can base on his own four years experience teach- ing unmatriculated ordinands at Brasted. It is one whose full implications may still startle the largely upper-class Church Assembly. Even if it is accepted there, it still has to pass the final hurdle of Parliament. For this report to be rejected at Westminster would be the most tragic vindication of Establishment.