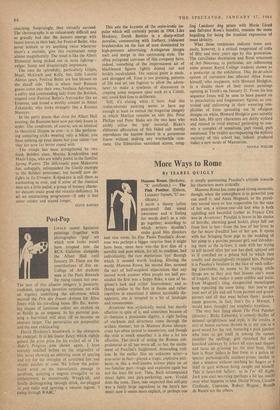 I HAVE a theory (often punctured) that visual awareness and a feeling for words don't as a rule go together; according to which writers shouldn't make good film directors and vice versa. So Pier Paolo Pasolini's Accat- tone was perhaps a bigger surprise than it might have been, since here was the first film of a novelist and poet which, for all its crudities, had individuality, the rare mysterious 'eye' through which it seemed worth looking, filtering the world. Mamma Roma, his second film, aroused the sort of half-sceptical expectation that any second work arouses when people are half per- suaded the first was a happy fluke, a case of be- ginner's luck and critics' benevolence; and as (being similar to the first in theme and rather repetitive in execution) it almost inevitably dis- appoints, one is tempted to a bit of hindsight and reassessment.

Accattone was stylistically weird, but mostly effective in spite of it, and sometimes because of it—because a passionate dignity, a right feeling of starkness and • directness came through the archaic manner; but in Mamma Roma idiosyn- crasy has often turned to mannerism, and though the style is much smoother it is also a lot less effective. The shock of seeing the Roman sub- proletariat at all has worn off, so has the excite- ment of Pasolini's heightened, demanding real- ism. In the earlier film an unknown actor—a non-actor in fact—played a tragic, explosive anti- hero; in this a well-known actress plays an all too familiar part—tragic and explosive again but not the least bit new. Then, Bach accompanied street fights and pick-pocketing; now, Vivaldi does the same. Then, one suspected that self-pity was a fairly large ingredient in the hero's tor- ment; now it seems more explicit, or perhaps one

is simply questioning Pasolini's attitude towards his characters more critically.

Mamma Roma has some good strong moments, though, when the atmosphere is so powerful you can smell it, and Anna Magnani, as the prosti- tute turned more or less respectable for the sake of her son, a sixteen-year-old lout who is both appalling and beautiful (rather as Franco Citti was in Accattone: Pasolini is brave in his choice of horrific, alarming good looks), plays full out from first to last—from the loss of her lover to the far more dreadful loss of her son. It opens with her bringing three pigs to the wedding of her pimp to a porcine peasant girl, and introduc- ing them as the in-laws; it ends with her trying to kill herself after her son has died, splayed out as if crucified on a prison bed to which they cruelly and meaninglessly strapped him. Perhaps it is Pasolini's fatalism in the face of such suffer- ing (inevitable, he seems to be saying, while things are as they are) that lessens one's sense of tragedy, that makes it seem sodden and static. Even Magnani's loUg, exasperated monologues keep repeating the same thing: that you've got your sort of life and self from parents and grand- parents and all that went before them: predes- tinate grooves, in fact, fate's (to a Marxist, I would have thought) too emphatic tramlines.

The very best thing about The Pink Panther (director: Blake Edwards), a comedy-thriller of unusual sprightliness and style, is the credits, a sort of bonus cartoon thrown in to put you in a good mood for the rest, featuring a pink panther who tries to get itself in among the names, muddles the, spellings, gets squashed flat and knocked sideways by letters all sizes and shapes, and turns up grinning for the next bout. Next best is Peter Sellers in fine form as a police in- spector pathologically accident-prone, unable to shut a window without catching his fingers or a thief in gaol without being caught out himself. This is heart-felt Sellers: as in I'm All Right, Jack you start worrying (perhaps a bit too much) over what happens to him. David Niven, Claudia Cardinale, Capucine, Robert Wagner, Brenda de Banzie are the others.