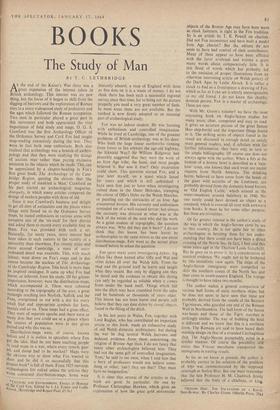 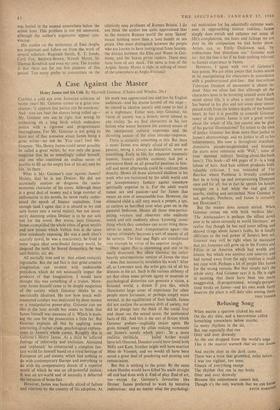 The Study of Man

BY T. C. LETHBRIDGE A. the end of the Kaiser's War there was a great expansion of the interest taken in British archaeology. This interest was no new thing, but the focus of it began to shift from the digging of barrows and the exploration of Roman sites to a more widespread study of prehistory and the ages which followed the Roman occupation. Two men in particular played a great part in this movement and both appreciated the vital importance of field study and maps. 0. G. S. Crawford was the first Archaeology Officer of the Ordnance Survey and Cyril Fox had taught map-reading extensively during the war. They were in fact both map enthusiasts. Both also realised that archmology was a branch of anthro- pology and that they were studying the doings of ancient man rather than paying exclusive attention to the objects which he made. This can be appreciated by a chapter-heading in Fox's first great book, The Archeology of the Cam- bridge Region, quoting the dictum that 'the proper study of mankind is Man.' Crawford on his part started an archaeological magazine, Antiquity, in which many articles compared the doings of modern peoples with those of old.

Since it was Crawford's business and delight to get all sites of antiquities and the places where things were found on to the Ordnance Survey maps, he issued enthusiasts in various areas with complete sets of the 'six-inch' for their district and asked them to record every available find on them. Fox was provided with such a set. Naturally, for many years, more interest had been taken in such matters in the vicinity of a university than elsewhere. For twenty miles and more around Cambridge, a mass of unco- ordinated detail was available. This, with much labour, went down on Fox's maps and in due course became the nucleus of The Archaeology of the Cambridge Region. This book is more than an inspired catalogue. It sums up what Fox had learnt, or inferred, from his study. Of far greater importance, however, were the distribution-maps, which accompanied it. These were coloured according to the topography of the area; a great rectangle reaching into Norfolk, Suffolk and the Fens, overprinted in red with a dot for every small find and appropriate symbols for forts, burials and so on. These maps had a great effect. They were of separate epochs and there were so many dots that you could see at a glance where the centres of population were at any given period and why this was so.

Distribution-maps were, of course, known before and it is useless to speculate where Fox got the idea. Had he not been teaching people to. read maps in a war, where every trench, gun- Pa, and dump had to be marked? Maps were the obvious way to show what Fox wanted to show and he did it so successfully that this present book* is full of them. From 1925 onwards archaeologists felt naked unless the articles they wrote contained distribution-maps. Some were * CULTURE AND ENVIRONMENT. Essays in Honour of Sir Cyril Fox. Edited by I. LI. Foster and Leslie Alcock. (Routl edge and Kegan Paul, £5 5s.)

blatantly absurd; a map of England with three or five dots on it is a waste of money. I do not think there has been such a successful regional survey since that time, for to bring out the picture properly you need a very great number of finds. In most areas these are not available. But the method is now firmly adopted as an essential part of archieological study.

Fox was no indoor student. He was bursting with enthusiasm and controlled imagination. While he lived at Cambridge, one of the greatest problems of British archaeology was at his door. Who built the huge linear earthworks running from forest to fen athwart the age-old highway, the Icknield Way? Sir William Ridgeway had plausibly suggested that they were the work of an Iron Age tribe, the Iceni, and most people believed it. But was it true? Only excavation could show. This question started Fox, and a year later myself, on a quest which lasted for years and which is still unfinished. I have seen -him just as keen when investigating ruined duns in the Outer Hebrides, tramping

the course of Off Dyke on the Welsh Marches, or puzzling out the intricacies of an Iron Age ornamental bronze. His curiosity and enthusiasm reminded me of a well-trained terrier; but always the curiosity was directed at what was at the back of the minds of the men who did the work. As a great student of topography, the question always was, 'Why did they put it here'?' I do not think that this lesson has been learnt by archaeologists to the same extent as the one about distribution-maps. Fox went to the actual place himself before he asked the question.

Fox spent many years investigating dykes: big dykes like those named after Offa and Wat and cross dykes all over the Welsh hills. From the map and the ground itself he learnt and taught what they meant. But only by digging can they be dated and the evidence to obtain this dating can only be regarded as reliable when it comes from under the bank itself. Things which fall into the ditch may have crumbled from the sides and be hundreds or thousands of years older. This lesson has not been learnt and people still believe that they can date dykes by casual .objects found in the filling of the ditch.

In his last years in Wales, Fox, together with Lord Raglan, who has contributed an important article to this book, made an exhaustive study of old Welsh domestic architecture; but during the war he dug several Welsh barrows and deduced evidence from, them concerning the

in religion of Bronze Age an. 1 do not fancy that many other archaeologists believed him. They had not the same gift of controlled imagination. Tom,' he said to me once, when 1 told him that a bevy of professors would not believe some- thing or other, 'can't they see that'? They must have no imagination.'

It is clear that several of the articles in this book are good. In particular, the one by Professor Christopher Hawkes, which gives an explanation of how the great gold penannular

objects of the Bronze Age may have been worn as cloak fasteners, is right in the Fox tradition. So is an article by T. E. Powell on chariots.. Did not Fox reconstruct and have built a model Iron Age chariot? But the editors do not seem to have had control of their contributors. Many of these appear to have been afflicted with the furor scribendi and written a great many words about comparatively little. It is this flood of words which has probably led to the omission of proper illustrations from an otherwise interesting article oh Welsh pottery of the Dark Ages by Leslie Alcock. It is rather a shock to find as a frontispiece a drawing of Fox, which as far as I can see is utterly unrecognisable a4 my old friend. 1 do not know this chubby, donnish person. Fox is a master of archmology. These are rare.

With Mr. Green's volumet we have the most interesting book on Anglo-Saxon studies for many years, clear, competent and easy to read. It gives an accurate picture of the great Sutton Hoo ship-burial and the important things found in it. The striking series of objects found in the vessel are discussed in enough detail to satisfy most general readers, and, if scholars wish for further information, they have only to turn to the ample bibliography. Of course one does not always agree with the author. When a fish at the bottom of a bronze bowl is described as a 'rain- bow' trout, one knows that such trout are recent imports from North America. The drinking horns, believed to have .come from the heads of the giant wild aurochs of the Continent, are probably derived from the domestic breed known as 'Old English Cattle,' which existed in the

water-meadows around Salisbury in 1940. No one surely could .have devised an object as a standard, which is covered all over with awkward iron hooks. It must be for some other purpose. But these are trivialities.

Of far greater interest is the author's study of the way in which the Anglo-Saxons came by sea to this country. He is not quite fair to other archaeologists in berating them for not under- standing that there could not have been a direct crossing of the North Sea. In fact, I had said this some years agO in the Thurlow Leeds festschrift. But he goes on to prove it, by a consideration of nautical evidence. -We ought not to be bothered by this unrealistic view again. The ships of the Anglo-Saxon immigrants were compelled to skirt the southern coasts of the North Sea and then cross to south-eastern England. The voyage is thought to have taken two months.

The author makes a general comparison of various hull forms of early northern ships; but he does not seem to have seen that these are probably derived from the vessels of the Barcarii Tigrisienses, who guarded one end of the Roman Wall in Northumbria. The hull form of the Saxon war-boats and those of the Tigris marshes is strikingly similar. The way of building the boat is different and we know that this is a northern form. The Romans are said to have based their warship design on that of a stranded Carthaginian ship. The Anglo-Saxons presumably acted in a similar manner. Of course the possibility still exists that Frisian merchants transported the immigrants in trading vesselS.

As far as we know at present, the author is probably correct in his solution of the problem of who was commemorated by the supposed cenotaph at Sutton Hoo. But one must remember that the late Professor H. M. Chadwick firmly believed that the body of a chieftain, or king,

was buried in the mound somewhere below the actual boat. This problem is not yet answered, although the author's arguments appear con- vincing.

His studies on the settlement of East Anglia are important and follow on from the work of several scholars. Reginald Smith, E. T. Leeds, Cyril Fox, Baldwin-Brown, Nowell Myres, Sir ThomaS Kendrick and even my own. The trouble is that there are far too few students of this period. Too many prefer to concentrate on the

relatively easy problems of Roman Britain-. I do not think the author has quite appreciated that to the western Roman world the term 'Saxon' meant nothing more than a land bandit or sea pirate. One must distinguish between the people who are known to have immigrated from Saxony, the district between the Elbe and Weser in Ger- many, and the Saxon pirate raiders. These may have been of any stock. The same is true of the Angles. Surely Myres is right in talking of many of the newcomers as Anglo-Frisians?