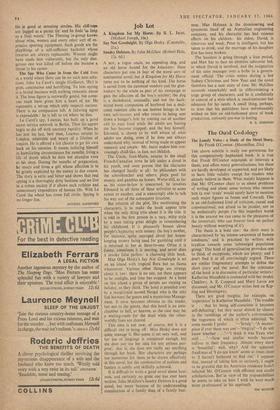 A BOY, a rogue uncle, an appealing dog, and an old horse bound for the knackers: these characters put one in fear of the worst sort of sentimental novel, but A Kingdom for My Horse turns out to be nothing of the kind. The horse is saved from the catsmeat vendors and the glue- makers by the uncle as part of his campaign to gain the affection of the boy's teacher; the dog is a dachshund, unusually, and not the hack- neyed boon companion of boyhood but a dedi- cated indolent able to use human beings in her own self-interest and who reacts to being sent down a badger's holt by coming out of another exit to steal food while the adults are fearing she has become trapped; and the boy himself, Edouard, is shown to be well aware of what adults are doing, even if he does not always understand why, instead of being made to appear innocent and simple: Mr. Jacot makes him con- vincingly child-like, in fact, not childish.

The Uncle, Jean-Marie, returns to the small French-Canadian town he left under a cloud in his youth, and soon proves that his character has changed hardly at all: he philanders with the schoolteacher and others, plays pool for money, and gambles on horses, Worse still, as far as- his sister-in-law is concerned, he involves Edouard in all three of these activities to some extent or another, and is annoyingly able to talk his way out of the subsequent situation.

But relation of the plot, like mentioning the characters, is to make the book appear trite when the only thing trite about it is the title. It is told in the first person in a racy, witty style by a man taking great delight in remembering his childhood. It is pleasantly honest about people's hypocrisy with money: the boy's mother, for instance, quite outraged about her house- keeping money being used for gambling until it is returned to her at three-to-one. Often it is funny, sometimes it is moving, and never does it invoke false pathos: a charming little book.

Miss Olga Hesky's Say Not Goodnight is set on an island with tropical flora but no fauna whatsoever. Various other things are strange about it, too: there is no sun, yet there appears to he sunlight, and time has stopped. At a hotel on this island a group of people are staying on holiday, as they think. The hotel is presided over by a receptionist named Nergal who is the only link between the guests and a mysterious Manage- ment. It soon becomes obvious to the reader, but not to the guests, that this hotel is an ante- chamber to hell, or heaven, as the case may be, a waiting-room for the dead while the other- worldly lines are cleared.

This idea is not new, of course, but it is a difficult one to bring off : Miss Hesky does not quite manage it. Her scene is set very well, and her use of language is competent enough, but she does not use her idea for any serious pur- pose: that is, she does not really say anything through her book. Her characters are perhaps too numerous for them to be drawn effectively in this novel, but the combination of realism and fantasy is subtly and skilfully achieved.

It is difficult to write a good novel about busi- ness, and certainly no great one has ever been written. John McGhee's Sundry Debtors is a good novel, but more because of its understanding examination of a family than of a family busi- ness. Max Holman is the domineering and tyrannous head of an Australian engineering company, and his character has had ruinous effects on his children: his eldest, David, is timorous and weak, Peter is intelligent, but has taken to drink, and the marriage of his daughter Eve has been broken.

The business is going through a lean period, and Max has to face an abortive take-over bid, in which David is involved, and the resignation of his sales manager over a bribe to a govern- ment official. The crisis comes during a hot Sydney Christmas and New Year and the novel therefore has a neat unity of time. Mr. McGhee succeeds remarkably well in differentiating a large group of characters, and he is confidently in control of a style which is unadventurous but adequate for his needs. A small thing, perhaps, to note that his publishers have unfortunately wished on him an old-fashioned piece of book production, curiously pre-war in feeling.