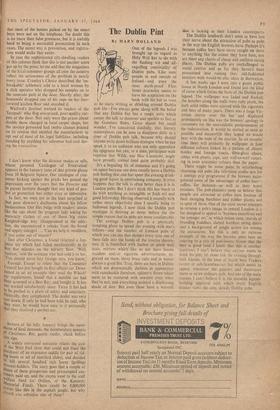 One Foot in the Door

RUMOUR has it that door- to-door selling, with all its Z-car type Newtown low- life drama, will be dis- cussed by the Consumer Council before the month is out. Mr. Edward Heath lias already indicated the Government's anxiety to ensure that the public (it may be gullible, but it votes) is not taken for too long and expensive a ride on this particular band- wagon.

Apart from pseudo-Canadians working their way through college and other people's goodwill, and encyclopaedia salesmen disguised as educa- tional sociologists, there is the central heating engineer who would like to use your house as a demonstration centre, so that you get a cut-price installation and your friends a ringside seat. To get rid of him it is no use calling a policeman.

Much better ask where you can go and see an- other such show installation in working order. But personal courage and presence of mind are not enough. The three- or four-day cooling-off period may help; even more of a safeguard will be the licensing of doorstep Dale Carnegies. If you are worried about the liberty of the subject (apart from the home is castle, and should have official moat theory), recall that street pedlars have for centuries had to put up with local authority licensing. And so have dogs. Like dogs, the doorstep merchant would need national licensing, being peripatetic. Or perhaps the licence could be issued to the salesman's company. Registration would certainly enable a house- holder to check credentials more readily.

Officialdom is reluctant to put shackles on en- terprise these days, until a strong case has been made out for protection, at least. There is some interesting evidence about the public attitude to doorstep selling that has not been made widely known. It was put together by a research firth called Market Investigations. The first point to note is that there has been a marked increase in this kind of touting, according to a third of the 1,500 people replying to the questionnaire. Of these only 14 per cent objected to any form of control, and nearly 40 per cent simply said, it should be stopped.'

Some of the verbatim comments referred to 'downright dishonesty,"a pack of salesmen's lies: 'time-wasting and rude,' no means of redress where product proves unsatisfactory,' 'can be, quite abusive,' and many another pertinent and far from friendly judgment. One aspect is pro' minent. Such salesmen tend to trade on the naivety and weak, good nature of young sub' urban or rural housewives. On the other side, if it is argued that the old and infirm rely on mobile shops and travelling salesmen, they also make excellent 'marks' for the greedy and unscruPir lous tout. The cooling-off period cannot apply to small cash sales for unwanted brushes, wash' powders, clothing, linen and the hundred and one other items now pushed over the thresholds of hundreds of thousands of British homes. There was a recent instance of salesmen sail fire extinguishers (said to be worth about 17s. 6d.r on behalf of the Borough of Woolwich, 0,1 29s. 6d. A quick phone call to the Town 1-11 would have scotched that one, but for the fact

that most of the houses picked on by the smart boys were not on the telephone. No doubt this is no more than false pretences, but it is awfully hard to bring a successful prosecution in such cases. The surest way is prevention, and registra- tion would make that easier.

In case the sophisticated city-dwelling readers of this column think that this is just another scare got up by the press, let me add that the magazines of the local consumer groups all over the country reflect the seriousness of the problem in nearly every issue. Crawley's Choice described the °un- breakable' tableware sold to a local woman by a slick operator who dropped his samples on to the concrete path at the door. Shortly after, the housewife dropped one of his cups on her lino- covered kitchen floor and smashed it.

Watford's Sentinel warned its readers of the 'footpads' who flog overpriced, poor-quality car- pets at the door. Not only were the prices about double those charged in local carpet shops, but the invoice presented had twelve clauses printed on its reverse that enabled the manufacturer to opt out of most of his legal liabilities, including standing by anything his salesman had said dur- ing the transaction.

I don't know what the director makes or sells, whose personal 'Catalogue of Frustration' appears in the January issue of that private glossy from 10 Belgrave Square. Our catalogue of con- sumer kicking against the pricks has gained the impression over the years that the Director and its parent institute thought that any kind of pro- test or protection was either cissy or subversive.

In fact, we were not in the least surprised at that poor director's disillusion about his fellow businessmen. Our files bulge with readers' stories like the one about the pregnant lady asking for maternity clothes at one of • those big stores Knightsbridge way. Disappointed at the selec- tion, she encountered a rebuke from the bored and uppity salesgirl ... 'Can we help it, moddom, if you come out of season?'

Just after Christmas, a friend returned a Jap- anese toy which had failed mechanically in its first five minutes on the nursery floor. 'Well, 'Madam,' said the assistant who had sold it to her. You should never buy foreign toys, you know.'

Enough. Except to relate that the Consumer Council has just bought its first official car. Deter- mined to set an example they read the Which? Car supplements, found that a suitable car had been screened as a Best Buy, and bought it. It has not worked satisfactorily since. Twice it has had to be pushed to a place of safety and sanctuary. Naturally, they complained. The dealer was very cast down. If only he had been told, he said, who they were, he would have seen to it personally that they received a perfect car.

Beware of the bills. January brings the snow- storm of final demands, the documentary nemesis of Christmas. But, gentle reader, check before You sign.

A widely canvassed anecdote relates the case uf the West End store that could not trace the Purchaser of an expensive saddle (or pair of rid- tug boots or set of matched clubs), and decided to bill several hundred rich "horsy (golfing) account-holders. The story goes that a couple of dozen of these prosperous and preoccupied cus- turners paid up, and the excess went to the staff Welfare fund (or Oxfam, or the Kennedy Memorial Fund). There could be 8,000,000 `,odes like this in the asphalt jungle, but why 'hould vou subsidise one of them?