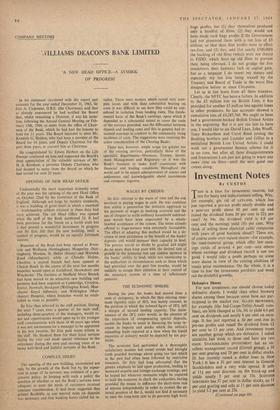 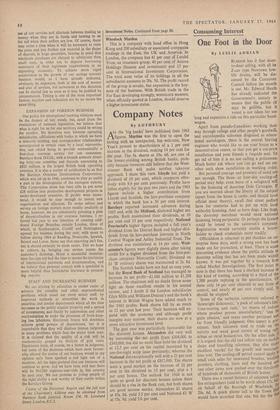 By CUSTOS THIS is a time for investment caution, but not for hasty and indiscriminate selling. Why, for example, get rid of LEYLAND, which has just reported a pre-tax profit nearly double and a post-tax profit about 80 per cent up and raised the dividend from 20 per cent to 22+ per cent? At 94s. the dividend yield is 4.8 per cent and the earnings yield 104 per cent. Why think of selling those electrical cable companies with years of good business ahead?- There are, of course some over-valued shares—for example, the road-material group, which offer low earn- ings yields of around 4 per cent—and others whose earnings and dividend record is not too good. I would take a profit perhaps on some store shares in view of the coming abolition of resale price maintenance. On the whole, it is a time to hoe the investment portfolio and weed out the doubtful growths.

Defensive Shares For new investment one should choose today defensive shares. I would class select brewery shares among these because some have not par- ticipated in the market rise. ALLIED BREWERIES, for example (the Ind-Coope-Tetley-Ansell com- bine), are little changed at 14s. 9d. to yield 4.4 per cent on dividends and nearly 8 per cent on earn- ings. It has just reported a 10 per cent rise in pre-tax prdfits and raised the dividend from 12 per cent to 13 per cent. And investment trusts are another group which are defensive. I called attention last week to three and here are two more. STOCKHOLDERS INVESTMENT has an ex- cellent management record (Govett group), a 16 per cent gearing and 29 per cent in dollar stocks. (It has recently raised a dollar loan in New York.) It has a 51 per cent interest in General Stockholders and a very wide spread. It sells at 114 per cent discount on the break-up and yields nearly 3 per cent at 33s. Sarrnsit NORTHERN has 37 per cent in dollar stocks, an 11 per cent gearing and sells at 11 per cent discount to yield 3.2 per cent at 25s.

This is a company with head office in Hong Kong and 200 subsidiary or associated companies tradings in the East, the UK and America. In London, the company has 41 per cent of Landel Trust, an insurance group, 40 per cent of Amore Holdings (finance and investment) and 25 per cent in International Investment Corporation. The total asset value of its holdings in all the subsidiaries amounts to 20s. 5d. The profit record of the group is erratic, but expansion is the key- note of the business. With British trade in the Far East developing strongly, WHEELOCK MARDEN, when officially quoted in London, should deserve a higher investment status.