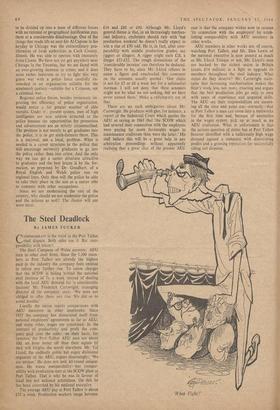 OMPARABILI1Y is the word in the Port Talbot steel dispute. Both sides use it. But com- parability with whom?

The Steel Company of Wales answers: AEU men in other steel firms. Since the 1,300 mem- bers at Port Talbot are already the highest paid in the industry the company feels entitled to refuse any further rise. To union charges that the SCOW is hiding behind the national steel increase of 7s. a week instead of dealing with the local AEU demand for 'a considerable increase' Mr. Frederick Cartwright, managing director of the company, says: 'We were not obliged to offer them any rise. We did so to avoid trouble.'

Locally the union rejects comparisons with AEU members in other steelworks. Since 1957 the company has dissociated itself from national employers' agreements as far as AEU, and some other, wages are concerned. In the interests of productivity and profit the com- pany paid over the odds: on their basic, for instance, the Pert Talbot AEU men are about 10d. an hour better off than their equals (if they will forgive the word) elsewhere. Mr. Tal Lloyd, the endlessly polite but cagey divisional organiser of the AEU, argues disarmingly: 'We are unique.' He does not seek all-round unique- ness. He wants comparability—but compar- ability with production men at the SCOW plant at Port Talbot. That is why he was in favour of local but not national arbitration. On this he has been overruled by his national executive.

The average AEU pay at Port Talbot is about £23 a week. Production workers range between £14 and £80 or £90. Although Mr. Lloyd's general theme is that, in an increasingly mechan- ised industry, craftsmen should rate with 'top production workers' he doesn't really expect to win a rise of £50 odd. He is, in fact, after com- parability with middle production grades, say riggers or slingers. A rigger might earn £28, a slinger £31-£32. The rough dimensions of the `considerable increase' can therefore be deduced. They have to be, since Mr. Lloyd refuses to name a figure and vouchsafed this comment on the amounts usually quoted : 'Our claim is not for £5 or £8 a week but for a substantial increase. I will not deny that these amounts might not be what we are seeking, but we have never named them.' Make a rallying-cry out of that.

There are no such ambiguities about Mr. Cartwright. He produces with glee, for instance, a report of the Industrial Court which quotes the AEU as saying in 1961 that 'the SCOW which had severed their connection with the employers were paying far more favourable wages to maintenance craftsmen than were the latter.' His staff believe this will be a great help in any arbitration proceedings without apparently realising that a great slice of the present AEU case is that the company wishes now to resume `its connection with the employers' by estab- lishing comparability with AEU members in other works.

AEU members in other works are, of course, watching Port Talbot, and Mr. Dan Lewis of the national executive is now around as much as Mr. Lloyd. Unique or not, Mr. Lloyd's men are backed by the richest union in Britain (assets £14 million) in a fight to upgrade its members throughout the steel industry. What status do they deserve? Mr. Cartwright main- tains that increasing mechanisation makes the fitter's work less, not mare, exacting and argues that the best production jobs go only to men with years of experience and acquired, skills. The AEU say their responsibilities are mount- ing all the time and point out—correctly—that at Port Talbot a man can come into a steelworks for the first time and, because of anomalies in the wages system, pick up as much as an AEU craftsman. What is unfortunate is that the serious question of status has at Port Talbot become identified with a ludicrously high wage demand against a company with diminishing profits and a growing reputation for successfully riding out disputes.