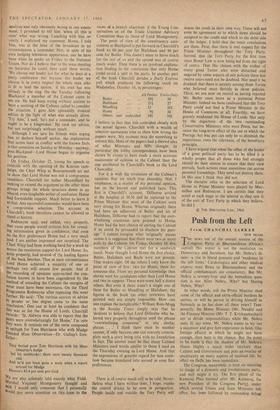 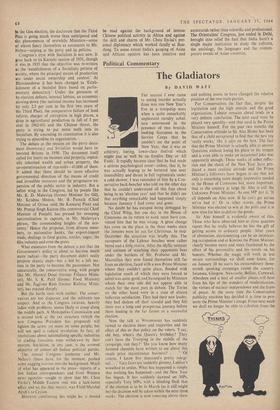 Push from the Left

THE news out of the annual session of the Congress Party at Bhuvaneshwar (Orissa's capital) this winter is not the resolution on Democracy and Socialism, but Mr. Nehru's ill- ness--a rise in blood pressure and 'weakness in the left limbs.' Cardiologists and other medical experts were, flown to Bhuvaneshwar and the official communiques are consolatory. But Mr. Nehru is seventy-four and the immediate ques- tion is not After Nehru, Who? but During Nehru, Who?

In other words, will the Prime Minister shed some of the official and extra-official burdens he carries, or will he persist in driving himself as furiously as he has done all these years? Tem- porarily, the Home Minister (Mr. Nanda) and the Finance Minister (Mr. T. T. Krishnamachari) are to divide responsibilities while Mr. Nehru rests. If, say some, Mr. Nehru wants to try out a successor and give him experience in fields (like foreign affairs) in which he might not have enough, then here is the chance. But the point to be made is that the shadow of Mr. Nehru's illness blights a much wider 'territory than Cabinet and Government and puts an overlay of uncertainty on many aspects of national life. Its effect on Delhi has been immediate. The Congress, meanwhile, is bent on restoring its image of a dynamic and revolutionary party, and well might it try. The first phase of the Kamaraj Plan (named after Mr. Kamaraj, the new President of the Congress Party), under which several Union and State Ministers Left office, has been followed by resounding defeat

In the Goa election, the disclosure that the Third Plan is going much worse than anticipated and the phenomenon of erstwhile Ministers—some of whom fancy themselves as successors to Mr. Nehru—sniping at the party and its policies.

Congress's tryst with Socialism is not new. It goes back to its Karachi session of 1931, though it was in 1955 that the objective was re-written as the 'establishment of a Socialistic pattern of society, where the principal means of production are under social ownership and control.' At Bhuvaneshwar it has been changed to 'Estab- lishment of a Socialist State based on parlia- mentary democracy.' Under the pressures of by-election defeats, internal lobbies, an economic slowing-down (the national income has increased by only 2.5 per cent in the first two years of the Third Plan), the comparative failure of land reform, charges of corruption in high places, a drop in agricultural production (a fall of 3 per cent in 1962-63) and the Chinese threat, the party is trying to put more teeth into its Socialism. By amending its constitution it is also trying to streamline its organisation.

The debate at the session on the party docu- ment Democracy and Socialism would have in- terested Britons in 1950. The document itself called for limits on incomes and property, especi- ally inherited wealth and urban property, the co-operativisation of rice-mills-43,000 of them. It added that there should be more effective governmental direction of the means of credit and investible resources and the progressive ex- pansion of the public sector in industry. But a leftist wing in the Congress, led by people like Mr. K. D. Malaviya (former Minister for Oil), Mr. Krishna Menon, Mr. B. Patnaik (Chief Minister of Orissa until the Kamaraj Plan) and Mr. Pratap Singh Kairon (the controversial Chief Minister of Punjab), has pressed for sweeping nationalisation to capture, in Mr. Malaviya's phrase, 'the commanding heights of the eco- nomy.' Hence the proposal, from diverse mem- bers, to nationalise banks, the export-import trade, dealings in food grains, textiles, sugar, the film industry and even the press.

What emanates from the debate is not that the Government's policy is about to become much more radical—the party document didn't really propose drastic steps—but a bid by a left sec- tion in the party to become the pacemaker. Not unnaturally, the conservative wing,. with people like Mr. Morarji Desai (former Finance Minis- ter), Mr, S. K. Patil (former Food Minister) and Mr. J'agjivan Ram (former Railway Minis- ter), has reacted sharply.

But the battle rests with neither. The conser- vatives are too disparate and the militants too suspect. And so the Congress caravan, heavily laden with problems, seems likely to creep along the middle path. A Monopolies Commission and a second look at the tax structure (which the new Congress President has proposed) will tighten the screw yet more on some people, but will not spell a radical revolution. In fact, all resolutions about nationalising specific industries "or trading functions were withdrawn by their movers. Socialism, in any case, is the avowed objective of almost all Indian political parties.

The annual Congress jamboree and Mr. Nehru's illness have. for the moment, pushed some nagging worries into the background. Much of what has appeared in the press—reports of a few Indian correspondents and from Western news agencies--sought to show that Mr. Chou En-lai's Middle Eastern visit was a lack-lustre affair and so, for that matter, was Field-Marshal Ayub's to Ceylon.

However comforting this might be, it should be read against the background of intense Chinese political activity in Africa and against the skill and charm of Mr. Chou En-lai's per- sonal diplomacy which worked fatally at Ban- dung. To some extent India's gauging of Asian and African opinion has been intuitive and amateurish rather than scientific and professional. The Orientalists' Congress, just ended in Delhi, brought into relief the fact that India hasn't a single major institution to study the cultures, the sociology, the languages and the contem- porary events of Asian countries.