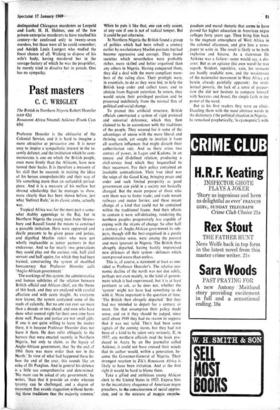 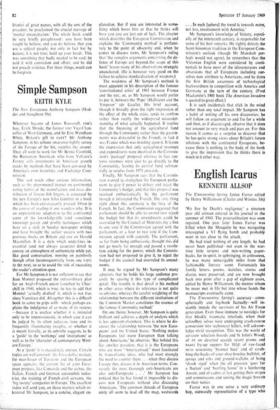 Renascent Africa Nnamdi Azikiwe (Frank Cass 65s) Professor Heussler is the obituarist of the Colonial Service, and it is hard to imagine a more attractive or persuasive one. It is never easy to inspire a sympathetic interest in the re- cently defunct, and the institution which he com- memorates is one on which the British people, even more firmly than the Africans, have now turned their backs. It is therefore a measure of his skill that he succeeds in making the ideas -of his heroes comprehensible and their way of life something more than an outlandish period- piece. And it is a measure of his mellow but shrewd scholarship that he manages to show, more clearly than has been shown before, just What 'Indirect Rule,' in its classic arena, actually was.

Tropical Africa was for the most part a some- what shabby appendage to the Raj, but in Northern Nigeria the Young men from Shrews- bury and Rossall found the means to construct a passable imitation. Here were oppressed and docile peasants to be given peace and justice, and dignified Muslim rulers who were pot wholly implausible as junior partners in that endeavour. And so for nearly two generations they could play out the curious role, half civil servant and half squire, for which they had been trained, constructing the system of modified bureaucracy that Professor Heussler calls 'Anglo-African government.'

The workings of this system, the administrative and human subtleties of the relation between British official and African chief, are the theme of this book, and they are analysed with careful affection and with acute insight. As everyone now knows, the system contained some of the seeds of calamity. But no one can ever see more than a decade or two ahead, and men who have

• done what seemed right for their own time have done well. Peace and justice are not small gibs. If one is not quite willing to leave the matter there, it is because Professor Heussler does not leave it there. He does refer obliquely to the horrors that were enacted recently in Northern Nigeria, but only to claim, as the legacy of Anglo-African government, that 'by the end of 1966 there was more order than not• in the North.' In view of what had happened there be- fore the end of the year, this sounds like an echo of Dr Pangloss. And in general his defence is a little too comprehensive and determined. 'No more can be asked of any government,' he writes, 'than that it provide an order wherein tyranny can be challenged, and a degree of movement that avoids stagnation .without harm- ing those traditions that the majority esteems.'

When he puts it like that, one can only assent, at any rate if one is not of radical temper. But it could-be put otherwise.

In Northern Nigeria the British found a group of polities which had been rebuilt a century earlier by revolutionary Muslim puritans but had become oppressive and corrupt. They found societies which nevertheless were probably richer, more skilled and better organised than any others in Nigeria. Having conquered them, they did a deal with the more compliant mem- bers of the ruling class. Their protees were, in essentials, to do as they were bid, to help the British keep order and collect taxes, and to abstain from flagrant extortion. In return, they would retain their privileged position and be preserved indefinitely from the normal flux of political and social change.

To protect this artificial structure, British officials constructed a system of rigid protocol and universal deference, which they then claimed to be in accordance with the traditions of the people. They secured for it some of the advantages of union with the more liberal and thriving south, yet sought to insulate it from all southern influences that might disturb their authoritarian rule. And so there arose two centres of power, in Lagos and Kaduna, in an uneasy and ill-defined relation, producing a civil-service feud which they bequeathed to their successors. For their policy contained an insoluble contradiction. Their true ideal was the reign of the Good King, bringing peace and order and such limited prosperity as good government can yield in a society not basically changed. But the main purpose of those who sent them was to foster trade; and trade meant railways and motor lorries; and these meant change of a kind that could not be contained within the traditional frame. And their efforts to contain it were self-defeating, rendering the northern peoples progressively less capable of coping with the strains of change. So after half a century of Anglo-African government its sub- jects, though still the best-organised in a purely administrative sense, were among the poorest and most ignorant in Nigeria. The British then abruptly departed, having hastily improvised new defences of their system—defences which soon proved worse than useless.

This is, of course, a statement at least as one- sided as Professor Heussler's. The relative eco- nomic decline of the north was not due solely, perhaps not even mainly, to the kind of govern- ment which it bad experienced; but it is at least pertinent to ask, as be does not, whether the 'system' might not have had something to do with it. More important is the question of time. 'The British then abruptly departed.' But they had not intended to depart for a century or more. On that assumption their policy made sense, and on it they should be judged, since until about 1949 they had no reason to suppose that it was not valid. There had been some signals of the coming storm, but they had not been of a kind to be taken very seriously. If, in 1937, any northern officials read the book pro- duced in Accra by an Ibo journalist called Azikiwe, it could not have crossed their minds that its author would, within a generation, be- come the Governor-General of Nigeria. Their strongest reaction to Zik's Renascent Africa is likely to have been irritation. And at the first sight it would be hard to blame them.

Take a gifted and ambitious young African clerk to the United States in 1925. Expose him to the incantatory eloquence of American negro preachers, to eke consciousness of racial oppres- sion, and to the mixture a magpie eneycle- paedism and moral rhetoric that seems to have passed for higher education in American negro colleges forty years ago. Then bring him back to the stagnant atmosphere of West Africa in the Colonial afternoon, and give him a news- .,paper to write in. The result is likely to be both explosive and bizarre. As a statesman Dr Azikiwe was a failure—some would say, a dis- aster. But as an agitator (his own word) he was superb. Strident, repetitive, vain, his sermons are hardly readable now, and the weaknesses of the nationalist movement in West Africa are herein already painfully apparent: the intel- lectual poverty, the lack of a sense of propor- tion (he did not hesitate to compare himself with Socrates and Jesus), the simple faith in the power of the word.

But to his first readers they were an elixir. Dazzling them with the most abstruse words in the dictionary ('the political situation in Nigeria,' he remarked prophetically, 'is cyanogenic), with

litanies of great names, with all the arts of the preacher, he proclaimed the crucial message of 'mental emancipation.' The whole book could be very briefly paraphrased: you have been taught to believe, and you do believe, that you. are a subject people, not only in fact but by nature; it is not true; hold up your heads. This was something that badly needed to be said; he said it with conviction and cffect; and he did not preach violence. For these things, much can be forgiven.