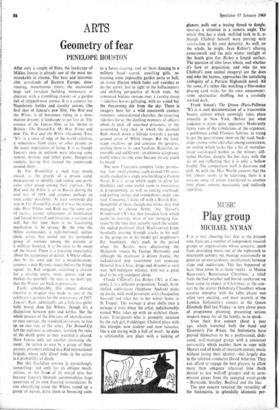 After only a couple of films, the landscape of Miklos Jancso is already one of the most un- mistakable in cinema. The bare and intermin- able grasslands of Eastern Europe; slow- running, monotonous rivers; the occasional huge and forsaken building, monastery or château, with a crumbling cloister or a garden full of chipped-nose statues. It is a country for Napoleonic battles and cavalry actions (the first shot of Jancso's new film, The Red and the White, is of horsemen riding in a slow- motion dream); a landscape to get lost in. The essence of the Jancso films so far shown in Britain—The Round-Up, My Way Flume and now The Red and the White (Academy Two, 'X')—is a sense of edge of the world isolation, a remoteness from cities, or other people, or the usual imperatives of living. It is as though Jancso's men in uniform were playing some remote, devious and lethal game, Hungarian roulette, having first cleared the countryside around them.

In The Round-Up a steel trap slowly closed, as the guards of a prison camp manoeuvred to identify and isolate one parti- cular rebel group among their captives. The Red and the White is set in Russia during the civil war of 1918, and assumes perhaps an even colder possibility. At least somebody did win in The Round-Up, even if it was the wrong side. Here Whites and Reds use the same sort of tactics, laconic refinements of humiliation and forced betrayal and ferocious assertions of will, but this time there is no fascinating mechanism to be sprung. By the time the White commander, a tight-buttoned, melan- choly aristo, has sorted out his particular group of enemies among the patients at a military hospital, it is his turn to be swept off the board. There is a lowering impartiality about the acceptance of defeat. A White officer, shot by his own side for a misdemeanour, assumes a pale Byronic stance before the firing- squad; the Red sergeant, searching a cloister for a missing sentry, turns, pauses and un- buckles his gun-belt—he sees, as we don't yet, that the Whites are back in possession.

Fairly unbelievably, this almost abstract exercise in disquiet was made as one of the celebratory gestures for the anniversary of 1917. Jancso's Reds, admittedly, are a little less guile- fully brutal than his Whites, though it's a distinction between pots and kettles. But the whole process of the film cuts off identification, or easy outrage, the standard invitations to line up on one side or the other. The Round-Up left the audience as outsiders, learning the rules of the death game as they watched it played. Here Jancso adds yet another alienating ele- ment: the action as seen by a group of Hun- garians, prisoners enlisted in a Red international brigade, whose only direct stake in the action is a probability of death.

But this Euclidian cinema is astonishingly compelling: not only for its oblique mech- anisms, or the fora of its stoical QED, but because Jancso's theorem accommodates huge quantities of its own freezing romanticism. In one electrifying scene the Whites round up a group of nurses, drive them in bouncing carts to a forest clearing, and set them dancing to a military band—scared, unwilling girls, re- creating some impossible garden party or ball; an ironic illusion which fades and vanishes as do the actors, lost to sight in the hallucinatory and shifting perspective of birch trees. An armoured biplane swoops over a cavalry troop —riderless horses galloping, with no sound but the threatening din from the sky. There is imagery here for a wild nineteenth century romance—onion-domed churches, the recurring riderless horse, the duelling manners of officers about to pick off unarmed prisoners, or the astounding long shot in which the doomed Reds march down a hillside towards a parade ground array of White troops. But the land- scape swallows up and contains the gestures, cooling them to its own fatalism. Beautiful, in- exorable and indifferent : an ultimate acceptance world where no one cries because no cry could be heard.

The new Cinecenta complex looks promis- ing: four small cinemas, each around 150 seats, neatly stacked in a single new building in Panton Street. It is a set-up which ought to allow for flexibility and some useful room to manoeuvre in programming, as well as cutting overheads and putting swings and roundabouts under one roof. Cinecenta I kicks off with a British film : thoughtful of them, though one wishes they had managed to choose better. Joe Massot's Wonderwall ('X') has that forsaken look which seems to overtake most of our swinging fan- tasies by the time they actually reach the screen. An addled professor (Jack MacGowran) keeps besottedly peering through cracks in his wall at the goings-on in his model girl neighbour's flat. Seemingly. she's stuck in the period when the Beatles were discovering the Maharishi (music by George Harrison); and although the professor is driven frantic, the lackadaisical pop assortment (art nouveau, Oriental bric-a-brac, drugs and dreams) is very wan. Self-indulgent whimsy, with not a great deal to be se-indulgent about.

Claude Chabrol's Les Biches ('X'), at Cine- centa 2, is a different proposition. Tough, hard- shelled sophisticate (Stephane Audran) picks up docile, milk-mild pavement artist (Jacqueline Sassard) and takes her to her winter home in St Tropez. The menage a deux shifts -into a ménage a trois when the artist, unfathomably named Why, takes up with an architect (Jean- Louis Trintignant) who is promptly annexed by the rich girl, Frederique. Chabrol plays with this triangle, now scalene and now isosceles, like a cat toying with a ball of wool: he dabs a relationship into place with a locking of glances, pulls out a teasing thread to dangle, reverses a situation in a camera angle. The whole film has a sleek, well-fed look to it, as though Chabrol himself were purring with satisfaction at his own dexterity. As well, on the whole, he might. Jean Rabier's alluring camerawork and the pale winter sunlight of the South give Les Biches a limpid surface. The question of who loves whom, and whether it's love or acquisition, and who (to use Chabrol's own animal imagery) are the does and who the hyenas, approaches the tantalising ambiguity of a Patricia Highsmith novel. All the same, it's rather like watching a film-maker playing card tricks for his own amusement: some spectacular shuffling, but a carefully stacked deck.

Frank Simon's The Queen (Paris-Pullman 'X') is a cool documentation of a transvestite beauty contest which seemingly takes place annually in New York. (Before just what audience is never quite apparent.) Moderately funny view of the tribulations of the organiser, a gentleman called Flawless Sabrina, in trying to get the quarrelsome show on the road; back- stage cinema verite chit-chat among contestants; an ending which looks like a bit of manufac- tured sociological pathos as the winner, self- styled Harlow, dangles his/her tiara with the air of one reflecting that it is only a hollow bauble. The competition itself is decorous and dull. As with the Miss World contests that the uec always seems to be televising, there is a curious sense of action transferred to another time plane, remote, narcissistic and endlessly repetitive.