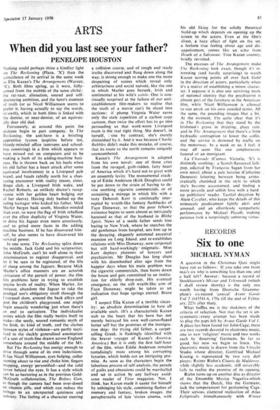 ARTS When did you last see your father?

Nothing could perhaps shine a kindlier light on The Reckoning (Plaza, 'X') than the

coincidence of its arrival in the same week as Elia Kazan's The Arrangement (Warner, -X'). Both films spring, as it were, fully- armed from the stubble of the same cliché: the rat-race, alienation, soured and self- destroying ambition, and the hero's moment

of truth (or as Nicol Williamson seems to prefer it, having actually to say the words, tir-ewth), which in both films is linked with the demise, or near-demise, of an equivoc- ally dear old dad.

Fortunately, at around this point the pictures begin to part company. In The Reckoning, the anti-hero is a bristling apprentice tycoon (aspirins before ten, bloody-minded office tantrums and school- boy conniving) in a firm which appears to have missed out on computers and to be making a hash of its adding-machine busi- ness. He is thrown back on his heels when his old father has a heart attack after some equivocal involvement in a Liverpool pub brawl, and heads rabidly north for a chas- tening encounter with reality (mum, sister, Bingo club, a Liverpool Irish wake, and Rachel Roberts, an unlikely doctor's recep- tionist with her golden heart bulging out of her sleeve). Having duly bashed up the puling teenager who kicked his father, Mick Marler barges back south, bloodier-minded than ever, to wave the flag of Irish rebellion over the effete duplicity of Virginia Water, to drive his Jaguar even more atrociously, and to grind more faces in the adding machine business. If he has discovered him- self, he also seems to have discovered his survival power.

In one sense, The Reckoning splits down the middle. Jack Gold and his scriptwriter, John McGrath, can't let well alone in their determination to register disapproval, and let it be seen to be registered, of the life of sheep among the Jaguars. Because Mick Mailer's office manners are an actorish caricature of the pursuit of power, the film hits problems later in trying to establish precise levels of reality. When Marler, for instance, abandons the Jaguar to take the prodigal son's obligatory stroll through the Liverpool slum, around the back alleys and past the children's playground, one might begin uneasily wondering just when there's an end to caricature. The individualist points which the film really bestirs itself to make—the seedy, soured romantic myth of the Irish, its kind of truth, and the clashes between styles of violence—are partly sacri- ficed to the slackly generalised assumption of a sort of truth-line drawn across England somewhere around the middle of the MI.

But The Reckoning has energy enough to drive through some of its own indecisions. It has Nicol Williamson. eyes bulging, collar seeming about to rise and choke him, fingers snapping. energy-personified—and the cold terror behind the eyes. It has a style which can be as hectoring as in the previous Gold- McGrath collaboration, The Bofors Gun, as though the camera had been over-dosed on vitamin pills, and which can reduce the voltage to an unexpected quietness and sobriety. The feeling of a character steering

a collision course, and of rough and ready truths discovered and flung down along the way, is strong enough to make one the more despairing of scenes which reveal only arbitrariness and social naiveté, like the one in which Marler goes berserk, Irish and sentimental at his wife's soiree. One is con- tinually surprised at the failure of our anti- establishment film-makers to realise that the truth of a movie can't be sliced into sections: if plump Virginia Water earns

only the stale repetition of a carbon copy cartoon, then twice the effort has to go into persuading us that work-worn Liverpool mum is the real right thing. She doesn't, in herself, sine by contrast; she's merely diminished by it. And it was because Charlie Bubbles-didn't make this mistake, of course, that its route to the north remains uniquely unencumbered.

Kazan's The Arrangement is adapted from his own novel: one of those cries from the ravaged, guilt-ridden, fatty heart of America which it's hard not to greet with an unseemly levity. The monumental crack- up of Eddie Anderson (Kirk Douglas) could be put down to the strain of having to de- vise soothing cigarette commercials, or of sustaining a ménage in which life with a testy Deborah Kerr is continually inter- rupted by wraith-like fantasy flashbacks of Faye Dunaway, so that the poor fellow's existence begins to seem almost as intricately harassed as that of the husband in Blithe Spirit. News of a senile, father sends him haring to New York, where he snatches the old gentleman from hospital, sets him up in the decaying, elegantly autumnal ancestral mansion on Long Island, and re-establishes relations with Miss Dunaway, now corporeal but still hard-workingly • enigmatic. Miss Kerr deploys platoons of lawyers and psychiatrists. Mr Douglas has long chats with his disembodied alter ego from the happier days when his main problem was the cigarette commercials, then burns down the house and gets committed to an institu- tion for elderly drop-outs. His eventual emergence, on the still wraith-like arm of Faye Dunaway, might be taken as an indication that hope springs eternal. Brave girl.

I suspect Elia Kazan of a terrible sincer- ity: an absolute determination to bare all available souls. (It's a characteristic Kazan stab to the heart that his hero has not merely betrayed his own well-camouflaged better self but the promises of the immigra- tion ship: the trying old father, a carpet- selling Greek, is flashingly identified with the braver voyager of Kazan's America, America.) But it is only the first half-hour of the film, when Eddie Anderson remains tantalisingly mute among his corrupting luxuries, which holds out an intriguing pro- mise. As soon as the characters begin the laborious process of self-analysis, the parade of guilts and obsessions could be marshalled and set in action by any halfway assid- uous reader of Time magazine. Nor, I think, has Kazan made it easier for himself by unhinging his style, combining flashes of memory and fantasy, broken images, the paraphernalia of late 'sixties cinema, with his old liking for the solidly theatrical build-up which depends on opening up the screen to the actors. Even at the film's direst, a hazy effect of light on the set. a forlorn true feeling about age and dis- appointment, comes like an echo from Death of a Salesman. True Kazan country, briefly revisited.

The excesses of The Arrangement make The Reckoning look exact, though it's in- teresting (and hardly surprising) to watch Kazan scoring points all over Jack Gold in the direction of actors, particularly when it's a matter of establishing a minor charac- ter. I suppose it is also one surviving mark of national identity that the psychiatrist is almost part of the furniture in the American film, while Nicol Williamson is allowed to run amok on his own unaided terms. All the same, the pounding images blur a bit. At the moment, I'm quite clear that it's in The Reckoning that they stand by the Irishman's grave in dripping, gluey rain. and in The Arrangement that there's a little hydraulic contraption to lower the coffin, and the service is drowned by traffic on the motorway. In a week or so, I feel, it may all seem like one conglomerate funeral of an immigrant.

La Chamade (Cameo, Victoria, 'X') is distinctly soothing: a Scotch-flavoured lolli- pop, adapted by Frangoise Sagan from her own novel, about a pale heroine (Catherine , Deneuve) loitering between being aristo- cratically cherished in the style to which she's become accustomed, and finding a more juvenile and selfish love with a hard- up publishers' reader. Tactful direction by Alain Cavalier, who keeps the details of this minuscule predicament lightly alert and amused, and an effortlessly sympathetic performance by Michael Piccoli, making patience look a surprisingly unboring virtue.