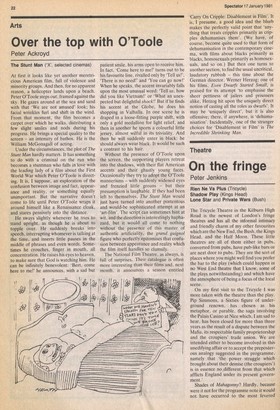 Over the top with O'Toole

The Stunt Man ('X', selected cinemas) At first it looks like yet another meretricious American film, full of violence and minority groups. And then, for no apparent reason, a helicopter lands upon a beach. Peter O'Toole steps out, framed against the sky. He gazes around at the sea and sand with that 'We are not amused' look; his facial wrinkles furl and shift in the wind. From that moment, the film becomes a carpet over which he walks, distributing a few slight smiles and nods during his progress. He brings a special quality to the screen an intensity of bathos. He is the William McGonagall of acting.

Under the circumstances, the plot of The Stunt Man hardly matters. It has something to do with a criminal on the run who becomes a stuntman who falls in love with the leading lady of a film about the First World War which Peter O'Toole is directing. It is, I suppose, an exploration of the confusion between image and fact, appearance and reality, or something equally unimportant. But the narrative doesn't come to life until Peter O'Toole wraps it around himself like a Renaissance cloak, and stares pensively into the distance.

He sways slightly whenever he tries to stand upright, as though he is about to topple over. He suddenly breaks into speech, interrupting whomever is talking at the time, and inserts little pauses in the middle of phrases and even words. Sometimes he crouches, finger in mouth, all concentration. He raises his eyes to heaven, to make sure that God is watching him. He can be infinitely benevolent: 'Bert, come here to me!' he announces, with a sad but patient smile, his arms open to receive him. In fact, 'Come here to me!' turns out to be his favourite line, rivalled only by 'Tell us!', 'There is no need!' and 'You can go now!' When he speaks, the accent invariably falls upon the most unusual word: 'Tell us, how did you like Vietnam!' or 'What an unexpected but delightful shock!' But if he finds his accent at the Globe, he does his shopping in Valhalla. In one scene he is draped in a loose-fitting purple shift, with only a gold medallion for light relief, and then in another he sports a colourful little jersey, almost wilful in its triviality. And then he will suddenly enter in black: he should always wear black. It would be such a contrast to his hair.

Without the presence of O'Toole upon the screen, the supporting players retreat into the shadows, with their flat American accents and their ghastly young faces. Occasionally they try to adopt the O'Toole mannerisms with suddenly widened eyes and frenzied little groans but their presumption is laughable. If they had been left to themselves, The Stunt Man would just have turned into another portentous and would-be sophisticated attempt at an 'art-film'. The script can sometimes hint at wit, and the direction is interestingly haphazard, but it would all come to nothing without the presence of this master of authentic artificiality, the grand guignol figure who perfectly epitomises that confusion between appearance and reality which the film itself handles so clumsily.

The National Film Theatre, as always, is full of surprises. Their catalogue is often more interesting than their films and, next month, it announces a season entitled / 9 'Carry On Cripple: Disablement in Film'. It is, I presume, a good idea and the blurb makes the perfectly valid point that 'anything that treats cripples primarily as cripples dehumanises them'. (We have, of course, become quite used to that form of dehumanisation in the contemporary cinema, with films about blacks primarily as blacks, homosexuals primarily as homosexuals, and so on.) But then one turns to another section, to find the usual uncritical, laudatory rubbish this time about the German director, Werner Herzog; one of his films, Even Dwarfs Started Small, is praised for its attempt `to emphasise the sheer pettiness of jailers and prisoners alike, Herzog hit upon the uniquely direct notion of casting all the roles as dwarfs'. It may be 'uniquely direct', but it is also offensive; there, if anywhere, is 'dehumanisation'. Incidentally, one of the stranger choices for 'Disablement in Film' is The Incredible Shrinking Man.