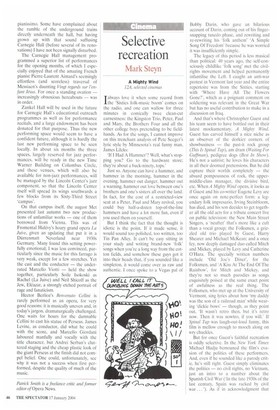 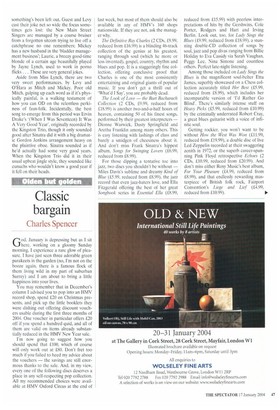 Ialways love it when some record from the 'Sixties folk-music boom' comes on the radio, and one can wallow for three minutes in comically twee clean-cut earnestness: the Kingston Trio, Peter, Paul and Mary. the Brothers Four and all the other college boys pretending to be fieldhands. As for the songs, I cannot improve on this trenchant analysis of Pete Seeger's lyric style by Minnesota's real funny man, James Lileks:

'If I Had A Hammer'? Well, what's stopping you? Go to the hardware store; they're about a buck-ninety, tops.'

Just so. Anyone can have a hammer, and hammer in the morning, hammer in the evening, hammer out danger, hammer out a warning, hammer out love between one's brothers and one's sisters all over the land. In fact, for the cost of a restricted-view seat at a Peter, Paul and Mary revival, you could buy half-a-dozen top-of-the-line hammers and have a lot more fun, even if you used them on yourself.

But I think the fact that the thought is idiotic is the point. If it made sense, it would sound too polished, too written, too Tin Pan Alley. It can't be easy sitting in your study and writing brand-new 'folk' songs when you're a long way from the cotton fields, and somehow these guys got it into their heads that, if you sounded like a simpleton, it would come over as raw and authentic. I once spoke to a Vegas pal of

Bobby Darin, who gave an hilarious account of Darin, coming out of his fingersnapping tuxedo phase, and rewriting and re-rewriting his 'folk anthem' A Simple Song Of Freedom' because he was worried it was insufficiently simple.

The legacy of this period is less musical than political: 40 years ago, the self-consciously childlike 'folk song' met the civilrights movement and helped permanently infantilise the Left. I caught an anti-war protest in Vermont last year and the entire repertoire was from the Sixties, starting with 'Where Have All The Flowers Gone?', which as a poignant comment on soldiering was relevant in the Great War but has no useful contribution to make in a discussion on Iraq.

And that's where Christopher Guest and his team seem to have bottled out in their latest mockumentary. A Mighty Wind. Guest has carved himself a nice niche as an observer of the dorkier corners of showbusiness — the past-it rock group (This Is Spinal Tap), am dram (Waiting For Guttman), pedigree dogs (Best In Show). He's not a satirist; he loves his characters in all their doomed pretensions. But he did capture their worlds completely — the absurd pompousness of rock, the uppermiddle-class manager, the divisive bird, etc. When A Mighty Wind opens, it looks as if Guest and his co-writer Eugene Levy are once again on note-perfect form: a legendary folk impresario, Irving Steinbloom, has died, and his son decides to get together all the old acts for a tribute concert live on public television: the New Main Street Singers, a `neuftee that's more like a cult than a vocal group; the Folksmen, a grizzled old trio played by Guest, Harry Shearer and Michael McKean; and a once fey, now deeply damaged duo called Mitch and Mickey, played by Levy and Catherine O'Hara. The specially written numbers include 'Old Joe's Diner', for the Folksmen, and 'A Kiss At The End Of The Rainbow', for Mitch and Mickey, and they're not so much parodies as songs exquisitely poised at the same exact point of awfulness as the real thing. The Folksmen, who met up at the University of Vermont, sing lyrics about how 'my daddy was the son of a railroad man' while wearing `dickie bows' — though, as they point out, 'It wasn't retro then, but it's retro now. Then it was nowtro, if you will. If Spinal Tap was laugh-out-loud funny, this film is mellow enough to mooch along on wry chuckles.

But for once Guest's faithful recreation is oddly selective. In the New York Times Michael Hadju bemoaned the film's evasion of the politics of these performers. And, even if he sounded like a parody critic, he's still right. Guest simply eliminates the politics — no civil rights, no Vietnam, just an intro to a number about the Spanish Civil War ('In the late 1930s of the last century, Spain was racked by civil war .. . '). As if in acknowledgment that

Aside from Miss Lynch, there are two very sweet performances, by Levy and O'Hara as Mitch and Mickey. Poor old Mitch, gulping up each word as if it's physically painful, is a walking testament of how you can OD on the relentless perkiness of faux-folk, Incidentally, the best song to emerge from this period was Ervin Drake's '(When I Was Seventeen) It Was A Very Good Year', originally recorded by the Kingston Trio, though it only sounded good after Sinatra did it with a big dramatic Gordon Jenkins arrangement heavy on the plaintive oboe. Sinatra sounded as if he'd actually had some very good years. When the Kingston Trio did it in their usual upbeat jingle style, they sounded like eunuchs who wouldn't know a good year if it fell on their heads.