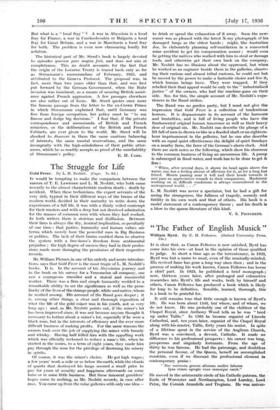 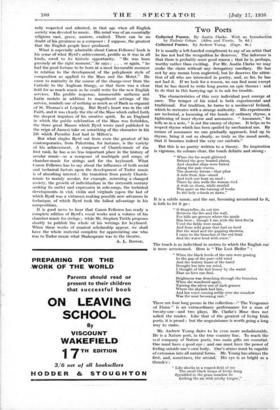 " The Father of English Musick " William Byrd. By

E. H. Fellowes. (Oxford University Press. 15s.) IT is clear that, as Canon Fellowes is now satisfied, Byrd has come into his own—at least in the opinion of those qualified to judge. As short a time ago as the tercentenary, in 1923, Byrd was but a name to most, even of the musically-minded. His revived fame has gone a long way since then ; and in the process of making his work known, Canon Fellowes has borne a chief part. In 1923, he published a brief monograph ; • now, thirteen years later, after prolonged and exhaustive researches into Byrd's life and works, both by himself and others, Canon Fellowes has produced a book which is likely for long to be definitive. Sensible, learned, thorough, this is a book to be grateful for.

It still remains true that little enough is known of Byrd's life. He was born about 1543, but where,-and of whom, we do not know. He was probably one of the children of the Chapel Royal, since Anthony Wood tells us he was " bred up under Tallis." In 1563 he became organist of Lincoln Cathedral, and, ten years later, organist of the Chapel Royal along with his master, Tallis, forty years his senior. In spite of a lifetime spent in the service of the Anglican Church, Byrd was a convinced, a devout, Catholic. It made no difference to his professional prospects : his career was long, prosperous and singularly fortunate. From the age of thirty he was famous. He had the patronage, and doubtless the personal favour, of the Queen, herself an accomplished musician, even if we discount the professional element in contemporary praise : " Nee contents graves, aliorum audire labores Ipsa etiam egregie voce manuque canit."

He moved in the aristocratic circle of his Catholic patrons, the Earls of Worcester and Northampton, Lord Lumley, Lord Petre, the Cornish Arundells and Tregians. He was univer- sally respected and admired, in that age when all English society was devoted to music. His mind was of an essentially religious cast, grave, austere, exalted. There can be no doubt of his greatness as a composer : I suppose, the greatest that the English people have produced.

What is especially admirable about Canon Fellowes' book is his sense of what Byrd's achievement, prolific as it was in all kinds, owed to its historic opportunity. " He was born precisely at the right moment," he says ; . . . or again, " he had the good foitune to be born at a most favourable moment in relation to the development of the polyphonic style of composition as applied to the Mass and the Motet." He came to maturity in the course of the change-over from the Catholic to the Anglican liturgy, so that there was a clear

field for as much music as he could write for the new English services. His prolific response, innumerable anthems and Latin motets in addition to magnificent settings of the service, reminds one of nothing so much as of Bach as organist of St. Thomas's at Leipzig. But Byrd's heart was in the old Faith, and it was clearly the rite of the Mass which called forth the deepest impulses of his creative spirit. In an England in which the public celebration of the Mass was forbidden, the three great Masses which Byrd wrote (and published in the reign of James) take on something of the character in his life which Paradise Lost had in Milton's.

But what singles Byrd out from even the greatest of his contemporaries, from Palestrina, for instance, is the variety of his achievement. A composer of Church-music of the first rank, he has a no less important place in the history of secular music—as a composer of madrigals and songs, of chamber-music for strings and for the keyboard. What Canon Fellowes has to say about the influences 'of both social and technical factors upon the development of Tudor music is of absorbing interest : the transition from purely Church- music to mainly secular, for example, mirroring a changed society, the growth of individualism in the sixteenth century seeking its outlet and expression in solo-songs, the technical developments in viol, violin and virginals (upon the last of which Byrd was a virtuoso) making possible new advances in technique, of which Byrd took the fullest advantage in his compositions.

It is good news to hear that Canon Fellowes has ready a complete edition of Byrd's vocal works and a volume of his chamber music for strings ; while' Mr. Stephen Tuttle proposes shortly to publish the whole of his writings for keyboard. When these works of musical scholarship appear, we shall have the whole material complete for appreciating one who was to Tudor music what Shakespeare was to the theatre.