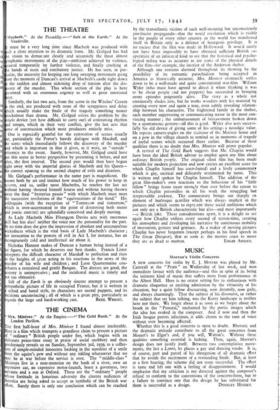 HE first half-hour of Mrs. Miniver I found almost intolerable. ere is a film which trumpets a grandiose claim to present a picture " ordinary " British people under fire which begins with an borate peace-time essay in praise of social snobbery and then nderously reveals us on Sunday, September 3rd, 1939, as a collec- on of simple-minded innocents basking in the sunshine of a smile ram the squire's pew and without any inkling whatsoever that we ay be at war before the service is over. The " middle-class " Myers live in a near-mansion on the bank of a river, own an pensive car, an expensive motor-launch, boast a governess, two ants and a son at Oxford. These are the " ordinary " people hose fortitude in luxurious adversity the cinema audiences of erica are being asked to accept as symbolic of the British war att. Surely there is only one conclusion which can be reached by the transatlantic victims of such well-meaning but unconsciously pro-fascist propaganda—that the world revolution which is visible to the people of every other country in the world has manifested itself in Britain only as a defence of bourgeois privilege. It is no excuse that the film was made in Hollywood. It would surely not have been impossible to have obtained sufficient British co- operation of an informed kind to see that the historical and psycho- logical milieu was as accurate as are SQITIZ of the physical details of the film—for example, the interior of the Anderson shelter. Although one remains alarmed throughout its showing by the possibility of its romantic parochialism being accepted in America as historically accurate, Mrs. Miniver eventually settles down to be a well-made and quite conventional war-film. William Wyler (who must have agreed to direct it when thinking it was to be about people End not puppets) has succeeded in bringing many episodes poignantly alive. The story as a whole not unnaturally eludes him, but he works wonders with his material by creating every now and again a true, even subtly revealing relation- ship between his characters. The frightened family in the shelter, each member suppressing or communicating terror in the most con- vincing manner ; the embarrassment of bereavement broken down by a spontaneous gesture—all this is good. Wyler also uses success- fully his old device of giving some of his settings a nostalgic value. He repeats camera-angles on the staircase of the. Miniver home and on a pew in the village church to remind us in moments of tragedy of joyful scenes which occurred there earlier. Because of these qualities there is no doubt that Mrs. Miniver will prove popular. A revival of The Gold Rush suggests that Mr. Chaplin would have been the ideal British adviser to employ upon any film about ordinary British people. The original silent film has been made suitable for modern projection and now carries an excellent score (to which Chaplin himself has contributed) and a lively commentary which is gay, satirical and delicately sentimental by turns. This is written and spoken by Chaplin himself. The addition of the great film-maker's own reactions to the behaviour of his "little fellow" brings home more strongly than ever before the extent to which Chaplin personifies in all his work the struggling but irrepressible cockney. The commentary brings out sharply an element of burlesque gentility which was always implicit in the pictures and which seems to represent those social ambitions which not only are a British characteristic but also—and most importantly —a British joke. These considerations apart, it is a delight to see again how Chaplin utilises every second of screen-time, creating his atmosphere and developing his narrative by continuous mobility of movement, gesture and grimace. As a maker of moving pictures Chaplin has never forgotten (except perhaps in his final speech in The Great Dictator), that as soon as the movies cease to move