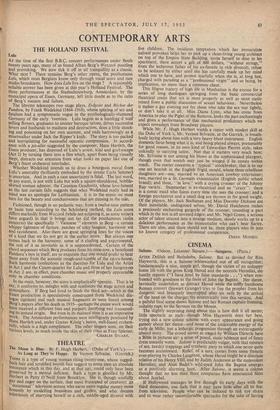 AT the time of the first B.B.C. concert performances under Boult twenty years ago, many of us found Alban Berg's Wozzeck puzzling

and provoking. We now tick it off in all tranquillity as a classic.

What next ? There remains Berg's other opera, the posthumous Lulu, which most Bergians know only through vocal score and rare studio broadcasts. How does Lulu live on the stage ? A reasonably reliable answer has been given at this year's Holland Festival. The three performances at the Stadsschouwburg, Amsterdam, by the municipal opera of Essen, Germany, left little doubt as to the ratio of Berg's success and failure. The libretto telescopes two stage plays, Erdgeist and Biichse der Pandora, by Frank Wedekind (1864-1918), whose splicing of sex and fatalism had a symptomatic vogue in the psychologically-shattered Germany of the early 'twenties. Lulu begins as a barelegg:d waif selling flowers, graduates to sinister baroque salons, drives successive lovers and husbands to madness and destruction, does a little shoot- ing and poisoning on her own account, and ends harrowingly as a streetwalker under Jack the Ripper's knife. The story is too packed and horripilating for successful operatic compression. In accord- ance with a pis-aller suggested by the composer, Hans Hartleb, the Essen producer, has disposed of Lulu's arrest, trial and gaol-escape (Act 2) by turning them into a film which, apart from being visually inept, distracts our attention from what looks on paper like one of Berg's finest orchestral interludes.

Whether Wedekind intends us to draw a bourgeois moral from Lulu's amorality (brilliantly embodied by the sirenic Carla Spletter) is uncertain. And in such a case uncertainty is fatal. The last word, in any event, is not with Lulu but with a square-shouldered, hobble- skirted woman admirer, the Countess Geschwitz, whose love-lament as the last curtain falls suggests that what Wedekind really had in Mind was an apologia for Lesbianism. It is to the music we must turn for the beauty and conclusiveness that are missing in the tale.

Fashioned, though in no pedantic way, from a twelve-tone pattern or basic tune according to the Schonberg method, the Lulu score differs markedly from Wozzeck (while not eclipsing it, as some writers have argued) in that it brings out (as did the posthumous violin concerto) the specifically " Viennese " elements in Berg--a certain whippy lightness of facture, patches of silky languor, harmonic wit and ravishment. Also there are great springing lines for the voices of a kind that we do not get in the earlier score. But always one comes back to the harmony, some of it eluding and experimental, the rest of it as inevitable as it is unprecedented. Certain of the chord sequences which Berg produces from his tone-row, a beneficent Pandora's box in itself, are so exquisite that one would prefer to hear them away from the acoustic rough-and-tumble of the opera-house. Such harmonic confections as the duettino for Lulu and the Artist in Act 1 and the Canon-quartet for Lulu and three of her hangers-on in Act 2 are, in effect, pure chamber music and properly appreciable only in chamber conditions.

In the main, however, the score is emphatically operatic. That is to say, it conforms to, mingles with and reinforces the stage action and atmosphere. If Berg had lived to finish the third act—which in the Essen production is speculatively constructed from Wedekind dia- logue (spoken) and • such musical fragments as were found among Berg's papers after his death in 1935—perhaps the entire work would have received a different bias and purport, justifying and transcend- ing its textual origin. But even in its maimed state it is an imperative Work. The Amsterdam performances were intelligently produced by Hans Hartleb and, under Gustav Konig's baton, well-found orchest- rally, which is a high compliment. The other singers were, on their various levels, as much inside the skin of their roles as Frau Spletter.