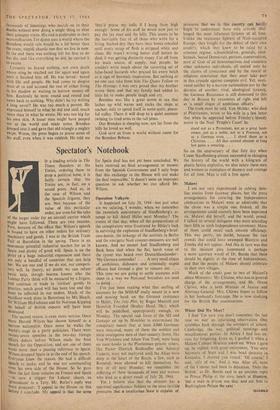 Operation Valkyrie It happened on July 20, 1944—but just what

• are we saluting, I wonder, when we remember the twentieth anniversary of Stauffenberg's at- tempt to kill Adolf Hitler next Monday? The events of that day, when all the ,preparations of the conspirators were frustrated by Hitler's luck in surviving the explosion of Stauffenberg's brief- case-bomb, the lethargy of the activists in Berlin and the energetic Nazi counter-measures are well known. And no sooner had Stauffenberg and Beck been shot when the flat, harsh voice of the tyrant was heard over Deutschlandsender: 'My German comrades! . . . A very small clique of ambitious, dishonest and criminally stupid officers had formed a plot to remove me. . . . This time we are going to settle accounts with them in a way we National Socialists are used to doing. . .

I've just been reading what that settling of accounts by the NSDAP really meant in a new and moving book on the German resistance to Hitler, The July Plot, by Roger Manyell and Heinrich Fraenkel (Bodley Head, 30s.), which will be published, appropriately enough, on Monday. The special task force of the SD and Gestapo set up by Himmler to exterminate the conspiracy meant that at least 4,000 Germans were executed, many of them the noblest and most courageous men of their country. Some, like Von Witzleben and. Adam Von Trott, were hung on meat-hooks in the Ploetzensee prison; others, like Pastor Dietrich Bonhoeffer and Admiral Canaris, were not martyred until the Allies were deep in the heart of the Reich; a few, such as Rommel, were allowed to kill themselves. So, first of all next Monday, we remember the suffering of these thousands of men and women who died as a direct result of July 20, 1944.

Yet _I believe also that the attentat has a universal significance. Subject to the most terrible pressures that a totalitarian State is capable of,

pressures that we in this country can hardly begin to understand, these men actively chal- lenged the most infamous tyranny of all time. Unlike the resistance fighters of Nazi-occupied Europe, they fought for the defeat of their own country, which they knew to be ruled by a criminal regime; schoolchildren, generals, intel- lectuals, Social Democrats, patriots, conservatives, men of God of all -denominations and countless other unknown individuals, all united only by the claims of. conscience and by the moral or religious conviction that they must take part in this crusade against complete evil. Yet, moti- vated neither by a narrow nationalism nor by the dictates of another, rival, ideological tyranny, the German Resistance is still dismissed to this day in Britain by extremists of right and left as 'a small clique of ambitious officers.'

The truth must be told. Von Moltke, who died at Ploetzensee, wrote to his wife in a last letter that when he appeared before Friesler's•bloody assize in the Nazi 'People's Court' he

So on the anniversary of that July day when Count Stauffenberg almost succeeded in changing the history of the world with a kilogram of plastic hexite explosive, we also salute these men and women as exemplars of decency and courage for all time. Man is still a free agent.