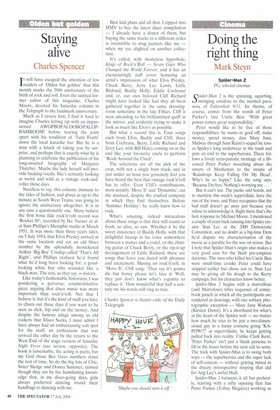 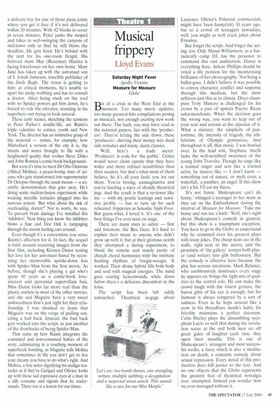 Peter would like to be free of those responsibilities: he wants to goof off, make money, spend money, date Mary Jane. Midway through Sam Raimi's sequel he tosses Spidey's long underwear in the trash and puts an end to the superheroics. There follows a lovely semi-parodic montage of a liberated Peter Parker mooching about the streets of Manhattan to the strains of 'Raindrops Keep Falling On My Head'. Why's he so happy? Like the song says, `Because I'm free/ Nothing's worrying me . . , ' But it can't last The punks and hoods, not to mention this week's supervillain, have the run of the town, and Peter recognises that the bad stuff doesn't go away just because you refuse to acknowledge it. Right there that's the best response to Michael Moore. I mentioned a couple of years back running into Spidey creator Stan Lee at the 2000 Democratic Convention, and no doubt as a big-time Dem he'd dispute my characterisation of the movie as a parable for the war on terror. But I note that Spider-Man's origin also makes a very good case for the Bush pre-emption doctrine. The men who killed his Uncle Ben were small-time crooks Peter could have stopped earlier but chose not to. Stan Lee may be giving all his dough to the Kerry campaign, but his characters know better.

Spider-Man 2 begins with a marvellous (and Marvelous) titles sequence of comicbook panels in which all the participants are rendered as drawings, with one solitary photographic exception — Mary Jane Watson (Kirsten Dunst). It's a shorthand for what's at the heart of the Spidey web — no matter how much he tries to be just a two-dimensional guy in a funny costume going `KAPOW!!!' at supervillains, he keeps getting pulled back into reality. Unlike Clark Kent, 'Peter Parker' isn't just a blank persona to fill in the hours before the next call to arms. The trick with Spider-Man is to swing both ways — the superheroics and the super lack of self-esteem — without getting mired in the dreary introspective moping that did for Ang Lee's awful Hulk.

Spider-Man 2 balances it all but perfectly, starting with a nifty opening that has Peter Parker (Tobey Maguire) working as

a delivery boy for one of those pizza joints where you get it free if it's not delivered within 30 minutes. With 42 blocks to cover in seven minutes, Peter junks the moped and takes to web-swinging the canyons of mid-town only to find he still blows the deadline. He gets fired. He's behind with the rent for his one-room fleapit. His beloved Aunt May (Rosemary Harris) is facing foreclosure on her own home. Mary Jane has taken up with the astronaut son of J. Jonah Jameson, irascible publisher of the Daily Bugle. The stress is getting to him: at critical moments, he's unable to spurt his sticky webbing and has to consult a doctor. After being stuck on the roof with no Spicley powers get him down, he's forced to ride the elevator, standing in his superhero suit trying to look natural.

These early scenes, sketching the tensions in Peter Parker's double-life, are Raimi's triple valentine to comics, youth and New York. The director has an instinctive grasp of the material — notice, for example, how Marvelised a version of the city it is, the streets and stores brought to life with a heightened quality that evokes Steve Ditko and John Romita's comic-book backgrounds.

But soon it's time to meet Dr Otto Octavius (Alfred Molina), a peace-loving man of science who gets transformed into supermonster Dr Octopus through the usual means — a scientific demonstration that goes awry. He's doing some nuclear-fusion experiment while wearing metallic tentacles plugged into his nervous system. 'But what about the risk of overloading, doctor?' Not to worry, he says. To prevent brain damage I've installed this 'inhibitor'. Next thing you know the inhibitor blows a fuse and Doc Ock is rampaging through the streets hurling cars around.

Even though it's a convention, you sense Raimi's affection for it. In fact, the sequel is built around recurring images from the first film, including Kirsten Dunst testing her love for her astronaut fiancé by recreating her memorable upside-down kiss with Spider-Man from the first movie. As before, though she's playing a gal who's spent 40 years as a comic-book loveinterest and perennial supervillain bait, Miss Dunst looks far more real than the plastic starlets in most of the other movies, and she and Maguire have a very sweet awkwardness that's just right for their relationship. I was shocked to learn that Maguire was on the verge of pulling out, citing a bad back. Instead, the bad back gets worked into the script, as just another of the drawbacks of being Spider-Man.

That sums up how Raimi integrates the costumed and non-costumed halves of the story, culminating in a touching moment of superfreak bonding, as Maguire tells Molina that sometimes in life you don't get to live your dream, you have to do what's right. And Molina, a fine actor dignifying his malign tentacles as if they're Gielgud and Olivier, looks up with those sad expressive eyes at a man in a silly costume and signals that he understands. There too is a lesson for our times.