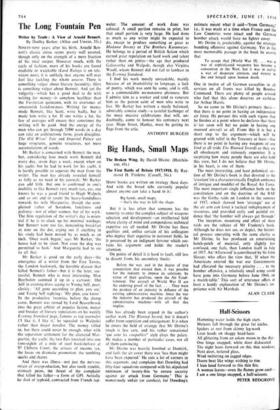 MANY books are written on strategy these days. And with the broad nibs currently popular

almost anyone can take a hand in it: ' Big hands, small maps; —that's the way to kill the chaps.

But it is less often that someone has the temerity to enter the complex subject of weapons selection and development—an intellectual field where clarity of mind and compendious technical expertise are all needed. Mr Divine has these qualities and, unlike certain of his colleagues who deploy their expertise in narrower fields, he is possessed by an indignant fervour which sus- tains his argument and holds the reader's attention.

On points of detail it is hard to fault, still less to dissent from, his secondary thesis:

Before the war, and in the degree of true competition that existed then, it was possible for the industry to impose its solutions, by virtue of their qualities, upon the Air Estab- lishment. The aircraft of World War II are the enduring proof of the fact. . . . They were the product of an industry in defiance of the existing administrative machine. Since the war the industry has produced the aircraft of the administrative machine—with all that this implies.

This has already been argued in the author's earlier work The Blunted Sword, but it doesn't suffer from repetition and enlargement. It is when he enters the field of strategy that Mr Divine's touch is less sure, and his rather sensational 'qui soft les coupables?' style cloys the palate. He makes a number of particular cases, not all of them convincing.

Mr Divine was heavily bombed at Dunkirk, and feels the air cover there was 'less than might have been expected.' He cuts a lot of corners in this argument, and complains that Dowding had fifty-four squadrons compared with his stipulated minimum of twenty-five 'to ensure security against air attack from Germany.' This is monstrously unfair (or careless), for Dowding's i.e., it was made at a time when France and the estimate meant what it said—'from Germany,' Low Countries were intact and the German bomber attack would have no fighter cover.

Mr Divine is, predictably, against the strategic bombing offensive against Germany. Yet in the most memorable passage in the book he asserts that

To accept that [World War III . . . was a war of sophisticated weaponry has become a convention in the West, but it was in reality a war of desperate attrition, and victory in the end hinged upon human death.

One in twelve of all German casualties in all services on all fronts was killed by Bomber Command. There are plenty of people around who feel that this alone deserves an earldom for Arthur Harris.

The most interesting, and least polemical, sec- tion of Mr Divine's book is that devoted to the 'creation' (in a characteristically English ambience of intrigue and muddle) of the Royal Air Force. The most important single influence both on the constitution and on the doctrine of the RAF was the Gotha raids on London in the summer of 1917, which showed how 'strategic' use of the air arm can force a tactical redeployment of resources, and provided early and painful evi- dence that 'the bomber will always get through.'

The inception, mounting and effect of these raids are the subject of Mr Fredette's book. Although he does not see, or depict, the histori- cal process operating with the same clarity as Mr Divine, he has produced an entertaining hotch-potch of material, only slightly less confused, one feels, than London itself in July of 1917. An 'Aftenvord' is contributed by Sir John Slessor, who offers the view that, 'If when the Americans entered the war our Governments had allocated the necessary priority . . . to the bomber offensive, a relatively small army could have gone into Germany before June 1944, on a march-table.' This sort of utterance offers at least a handy explanation of Mr Divine's im- patience with Air Marshals. ALAN CLARK