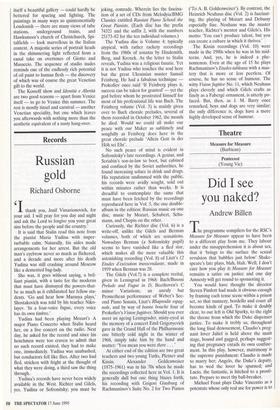 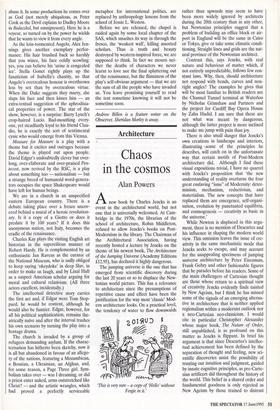 Measure for Measure (Barbican) Pentecost (Young Vic) Did I see

The programme compilers for the RSC's Measure for Measure appear to have been to a different play from me. They labour under the misapprehension it is about sex, that it 'brings to the surface the sexual revulsion that bubbles just below' Shake- speare's late plays, blah, blah. Well, I don't care how you play it: Measure for Measure remains a satire on justice and one day Amnesty will get round to sponsoring it.

You would have thought the director Steven Pimlott had made it obvious enough by framing each tense scene within a prison set, so that nunnery, bordello and court all become kinds of gaol. To make it doubly clear, to our left is Old Sparky, to the right the throne from which the Duke dispenses justice. To make it trebly so, throughout the long final denouement, Claudio's preg- nant lover Juliet is held above the main stage, bound and gagged, perhaps suggest- ing that pregnancy entails its own confine- ment. In this play, however, matrimony is the supreme punishment: Claudio is made to marry her; Angelo, the Duke's deputy, has to wed the lover he spurned; and Lucio, the fantastic, is hitched to a prosti- tute. Prepare to meet thy ball-breaker. Michael Feast plays Duke Vincentio as a potentate whose only real use for power is to abuse it. In some productions he comes over as God (not merely ubiquitous, as Peter Cook as the Devil explains to Dudley Moore in Bedazzled, but omnipresent). Here he is a voyeur, so turned on by the power he wields that he wants to view it from every angle.

As the loin-tormented Angelo, Alex Jen- nings gives another exemplary perfor- mance. His hair brushed back so harshly that you wince, his face coldly scowling: yes, you can believe his 'urine is congealed ice'. Stella Gonet rightly plays up the fanaticism of Isabella's chastity, so that Angelo's overzealous honour is overthrown less by sex than by overzealous virtue. When the Duke suggests they marry, she slaps his face and then kisses him — an extra-textual suggestion of the aphrodisia- cal properties of power. The star of the show, however, is a surprise: Barry Lynch's crop-haired Lucio. Bad-mouthing every- one, yet steadfastly loyal to his friend Clau- dio, he is exactly the sort of sentimental cynic who would emerge from this Vienna.

Measure for Measure is a play with a theme but it excites and outrages because the theme is played out upon people. David Edgar's undoubtedly clever but over- long, over-elaborate and over-praised Pen- tecost, now revived by the RSC, is a play about something too — nationalism — but a strange breed of humanoid word-genera- tors occupies the space Shakespeare would have left for human beings.

We are in a church in an unspecified eastern European country. There is a debate taking place over a fresco uncov- ered behind a mural of a heroic revolution- ary. Is it a copy of a Giotto or does it predate it by 100 years? If it does this anonymous nation, not Italy, becomes the cradle of the renaissance.

Charles Kay plays the visiting English art historian in the supercilious manner of Robert Hardy. He is complemented by an enthusiastic Jan Ravens as the curator of the National Museum, who is sadly obliged to keep saying `okeydoke' in deep Slav, in order to make us laugh, and by Linal Haft as a suspect American scholar arguing for moral and cultural relativism. (All three actors excellent, incidentally.) The intellectual detective story carries the first act and, if Edgar were Tom Stop- pard, he would be content, although he would also be funnier. Edgar, however, for all his political sophistication, remains the- atrically naïve and after the interval trashes his own scenario by turning the play into a hostage drama.

The church is invaded by a group of refugees demanding asylum. If the charac- terisation has hitherto been sketchy, now it is all but abandoned in favour of an allego- ry of the nations, featuring a Mozambican, a Bosnian, a Ukrainian, an Afghan, and, for some reason, a Page Three girl. Sym- bolism takes over — was I dreaming, or did a priest enter naked, arms outstretched like Christ? — and the artistic wrangles, which had proved a perfectly serviceable metaphor for international politics, are replaced by anthropology lessons from the school of Jessie L. Weston.

Before we are released, the chapel is raided again by some local chapter of the SAS, which smashes its way in through the fresco, the 'weakest wall', killing assorted scholars. Thus is truth and beauty destroyed by western-inspired force, we are supposed to think. In fact we mourn nei- ther the deaths of characters we never learnt to love nor the final spluttering out of the renaissance, but the flimsiness of the play's self-obvious argument — that we are the sum of all the people who have invaded us. You leave promising yourself to read the text sometime knowing it will not be sometime soon.

Andrew Billen is a feature writer on the Observer. Sheridan Morley is away.