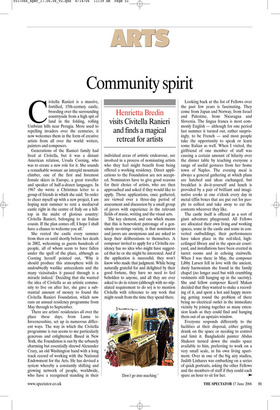 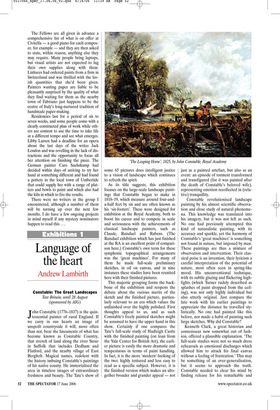 Civitella Ranieri is a massive, fortified, 15th-century castle, brooding over the surrounding countryside from a high spit of land in the folding, rolling Umbrian hills near Perugia. More used to repelling invaders over the centuries, it now welcomes them in the form of creative artists from all over the world: writers, painters and composers.

Generations of the Ranieri family had lived at Civitella, but it was a distant American relation, Ursula Corning, who was to create a new role for it. She sounds a remarkable woman: an intrepid mountain climber, one of the first and foremost female skiers in Europe, a great traveller and speaker of half-a-dozen languages. In 1967 she wrote a Christmas letter to a group of friends in which she said: ‘In order to cheer myself up with a new project, I am hoping next summer to rent a mediaeval castle right in the centre of Italy on a hilltop in the midst of glorious country: Civitella Ranieri, belonging to an Italian cousin. If the plan comes off, I hope I shall have a chance to welcome you all.’ She rented the castle every summer from then on until shortly before her death in 2002, welcoming as guests hundreds of people, all of whom seem to have fallen under the spell of the place, although as Corning herself pointed out, ‘Why it should produce this atmosphere with its undoubtedly warlike antecedents and the many vicissitudes it passed through is a miracle indeed.’ Deciding that she wanted the idea of Civitella as an artistic community to live on after her, she gave a substantial amount of money to found the Civitella Ranieri Foundation, which now runs an annual residency programme from May through to September.

There are artists’ residencies all over the place these days, from Lamu to Invernessshire, set up in numerous different ways. The way in which the Civitella programme is run seems to me particularly generous and enlightened. Based in New York, the Foundation is run by the urbanely charming but essentially shrewd Alexander Crary, an old Washington hand with a long track record of working with the National Endowment for the Arts. He has devised a system whereby a constantly shifting and growing network of people, worldwide, who have a recognised standing in their individual areas of artistic endeavour, are involved in a process of nominating artists who they feel might benefit from being offered a working residency. Direct applications to the Foundation are not accepted. Nominators have to give good reasons for their choice of artists, who are then approached and asked if they would like to apply. Those applications, once gathered, are viewed over a three-day period of assessment and discussion by a small group of jurors with experience in the relevant fields of music, writing and the visual arts.

The key element, and one which means that this is benevolent patronage of a genuinely no-strings variety, is that nominators and jurors are anonymous and are asked to keep their deliberations to themselves. A composer invited to apply for a Civitella residency has no idea who might have suggested that he or she might be interested. And if the application is successful, they won’t know who made that judgment. While being naturally grateful for and delighted by their good fortune, they have no need to feel beholden to anyone, and all they are ever asked to do in return (although with no stipulated requirement to do so) is to mention Civitella with reference to any work that might result from the time they spend there. Looking back at the list of Fellows over the past few years is fascinating. They come from Japan and Norway, from Israel and Palestine, from Nicaragua and Slovenia. The lingua franca is most commonly English — although for one period last summer it turned out, rather surprisingly, to be French — and most people take the opportunity to speak or learn some Italian as well. When I visited, the girlfriend of one member of staff was causing a certain amount of hilarity over the dinner table by teaching everyone a range of useful gestures from her home town of Naples. The evening meal is always a general gathering at which plans are hatched and ideas exchanged, but breakfast is do-it-yourself and lunch is provided by a pair of brilliant and imaginative cooks at one o’clock every day in metal tiffin boxes that are put out for people to collect and take away to eat the contents wherever they like.

The castle itself is offered as a sort of giant adventure playground. All Fellows are allocated their own living and working spaces, some in the castle and some in converted outbuildings; their performances have taken place in the red-tiled, highceilinged library and in the open-air courtyard, and installations have been erected in turret rooms and in echoing stairwells. When I was there in May, the composer Libby Larsen fell in love with the ancient, dusty harmonium she found in the family chapel (no longer used but with crumbling vestments still hanging up in the sacristy). She and fellow composer Keeril Makan decided that they wanted to make a recording of it, and spent a hot and happy morning getting round the problem of there being no electrical outlet in the immediate vicinity by joining together as many extension leads as they could find and hanging them out of an upstairs window.

Everyone responds differently to the facilities at their disposal, either getting drunk on the space or needing to control and limit it. Bangladeshi painter Abdus Shakoor turned down the studio space available to him, preferring to work on a very small scale, in his own living apartment. Over in one of the big airy studios, Judith Linhares was embarking on a series of quick portraits, asking the other Fellows and the members of staff if they could each spare an hour to sit for her. The Fellows are all given in advance a comprehensive list of what is on offer at Civitella — a good piano for each composer, for example — and they are then asked to state, within reason, anything else they may require. Many people bring laptops, but visual artists are not expected to lug their own supplies along with them. Linhares had ordered paints from a firm in Switzerland and was thrilled with the lavish quantities that she’d been given. Painters wanting paper are liable to be pleasantly surprised by the quality of what they find waiting for them as the nearby town of Fabriano just happens to be the centre of Italy’s long-nurtured tradition of handmade paper-making.

Residencies last for a period of six to seven weeks, and some people come with a clearly constructed plan of work while others are content to use the time to take life at a different tempo and see what emerges. Libby Larsen had a deadline for an opera about the last days of the writer Jack London and was revelling in the lack of distractions and the opportunity to focus all her attention on finishing the piece. The German painter Caro Suehrkamp had decided within days of arriving to try her hand at something different and had found a pottery in the local town of Umbertide that could supply her with a range of platters and bowls to paint and which also had the kiln in which to fire the results.

There were no writers in the group I encountered, although a number of them will be turning up over the next few months. I do have a few ongoing projects in mind myself if any mystery nominators happen to read this ...