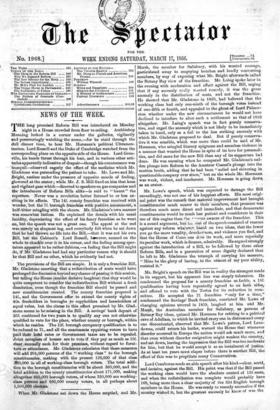 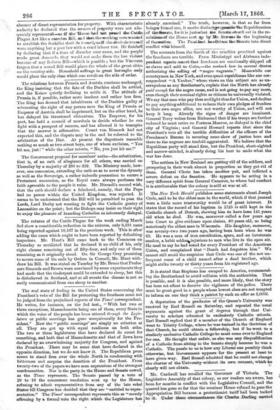 Lord Cranborne made an able speech after his kind—clear, acrid,

and inciaive, against the Bill. His point was that if the Bill passed the working class would have the absolute control of 133 seats, and when the redistribution was complete would probably have 168, being more than a clear majority of the 334 English borough members in the House. He was ready to remedy anomalies if the country wished it, but the greatest anomaly he knew of was the absence of direct representation for property. With characteristic audacity ha declared that the owners of property were not ade- quately represented—as if the llouse9sed mot paved ihe Cats Plague Act like a coercion Bill, and thattheeworking meirsvanted to establish the Socialist droit tempi/ins/1 ,the,droit-dattraaait were anything but a poor law with a cruel labour test. He finished by declaring that if a time of disorder ever came, and the people- made great denrinii, they would not make them the less violent because of any Reform Bill—which is possible ; but the Viscount forgets that a sound Bill would place the whole of the great cities on the resisting side. Household suffrage in great boroughs only, would place the only class which can revolt on the side of order.