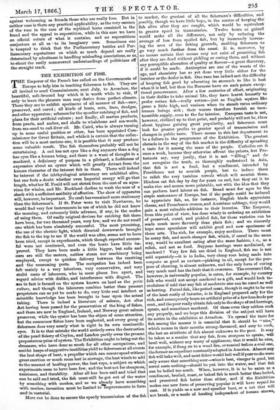 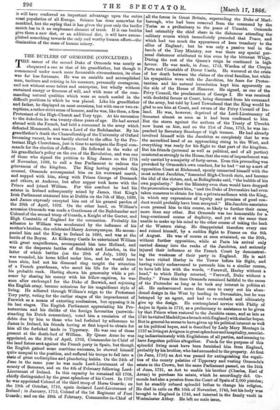 THE EXHIBITION OF FISH.

THE Emperor of the French has called on the Governments of Europe to help him in teaching fishermen to fish. They are all invited to send Commissioners, next July, to Arcachon, the beautiful, soft-breezed bay which it is worth while to visit, if only to learn the pleasure man may derive from perfect climate. There they are to exhibit specimens of all manner of fish—rasa, preserved, and cured ; all kinds of boats, nets, lines, dredges, and other apparatus; schemes for the speedier catching of fish, and' plans for their artificial culture ; and finally, all marine products, from pearls, and amber, and shells to whalebone and sea-weeds, from sea-sand to cod-liver oil. Mr. Caird, who is always turning -up in some useful position or other, has been appointed Com- missioner for Great Britain, and while it is certain that the collec- tion will be a most curious one, it is possible that it may produce some valuable result. The fish themselves. robably will not be entertaining. A cod has not eyes like a dog anymore than a dog has eyes like a human being, and there is a want of thought in a mackerel, a deficiency of purpose in a pilchard, a feebleness of expression about an oyster which -will greatly detract from the human character of the interest felt in them. There will indeed -be interest if the ichthyological aristocracy are exhibited alive, but one feels a doubt whether even Imperial energy will go that length, whether M. Fould will not shrink from the cost of an aqua- TitIM for whales, and Mr. Buckle/1d decline to wash the nose of a shark with a sufficient assiduity of affection. The show of apparatus will, however, be important. No crafthasremainedmore stationary .than the fisherman's. If St. Peter were to visit Newhaven, he would find very few instruments in use of which he did not know the meaning, and extremely little advance, if any, in the modes of using them. Of really original devices for catching fish there have been, for two thousand years, very few, 'and we do not recall -one which has been -absolutely successful. The most promising, 'the use of the electric light, which directed downwards brought the fish to the top to see if the -world was afire, seems not to have been tried, except in experiments, which though reported success- ful were not continued, and even the boats have little im- proved. They have been made a little bigger, but sails and oars are still the motors, neither steam nor machinery being employed, except to quicken delivery between the receiving and the consuming ports. The occupation has indeed been deft mainly to a very laborious, very conservative, and very stolid caste of labourers, who in most places live apart, and regard advice with dislike, and interference with disgust. The sea in fact is farmed on the system known on land as the petite culture, and though the labourers combine better than peasant proprietors can as yet be made to do, very little real intellect or scientific knowledge has been brought to bear upon the actual taking. There is indeed a literature of salmon, Act after Act having been passed for the preservation of the king of fishes, And there are now in' England, Ireland, and Norway great salmon preserves, while the oyster has been the object of some attention, but the commoner fishes have been neglected, and every group of .fishermen does very nearly what is right in its own unscientific eyes. It is to that mistake the world entirely owes the destruction of the pearl fishery of Ceylon, and London partly owes the present preposterous price of oysters. The Exhibition ought to bring out the dreamers, who have done so much for all other occupations, and -amidst heaps of suggestive inutilities yield to fishermen at all events the best shape of boat, a propeller which can ensure-speed without great exertion or much room lost in stowage, the best winch to add to the amount of healing power, the best rope, a subject on which experiments seem to have been few, and the best net for cheapness, resistance, and durability. After all has been said and tried that can be said and tried, the fish must still be got oat of the water by something -with meshes, and as we already have something with meshes, invention must be limited to improvements in form and in -material.

it will have conferred an important advantage upon the entire coast population of all Europe. Science has done somewhat for mankind, but the saying that it has given the poor only the lucifer match has in it an unpleasant element of truth. If it can besides give them a new diet, or an additional diet, it will have accom- plished something towards the only end worthy human effort—the diminution of the mass of human misery.