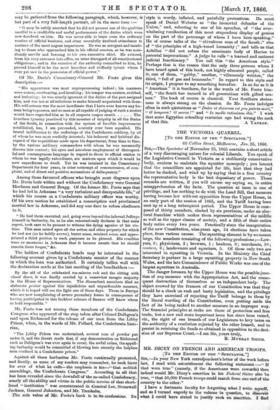 [To THE EDITOR OF THE " SPECTATOR-1 60 Collins Street, Melbourne, .Ian. 25, 1866. SIR,—The Spectator of November 25, 1865 contains a short article of a very discouraging nature for colonial Liberals. You speak of the Legislative Council in Victoria as a stubbornly conservative body, anxious to maintain the squatter monopoly ; you lament that the councillors are appointed for life, hint that they had better be ducked, and wind up by saying that in a free country the representative body is the best depositary of power. These remarks are written, if you will excuse my saying so, in entire misapprehension of the facts. The question at issue is one of privilege, and has nothing to do with the Land Bill, that measure having become law without opposition from the Upper House, in an early part of the session of 1865, and the Tariff having been sent up at a long subsequent period. The Upper House is com- posed of thirty members, elected by six provinces, under an elec- toral franchise which makes them representatives of the middle as well as the upper classes of society, and a fifth of their entire body retire every two years. Practically since the inauguration of the new Constitution, nine years ago, 54 elections have taken place, from various causes. The squatting element is by no means large, the members consisting of the following professions;—Law- yers, 3 ; physicians, 2 ; brewers, 1 ; bankers, 3 ; merchants, 10 ; rentiers, 6 ; landowners and squatters, 5. Of these only two are interested in squatting in Victoria. In the Ministry the Chief Secretary is partner in a large squatting property in New South Wales, and the late Commissioner of Public Works was one of the largest squatters in Australia.

The danger foreseen by the Upper House was the possible junc- tion of any measure with the Appropriation Act, and the conse- quent destruction of themselves as an independent body. The object avowed by the framers of our Constitution was that they should be a check on rash and hasty legislation, and the privilege they have exercised of rejecting the Tariff belongs to them by the literal wording of the Constitution, even putting aside the fact of its being tacked to another measure in an improper way. The financial principles at stake are those of protection and free trade, but a new and more important issue has since been raised, viz., the right of one branch of our Legislature to levy taxes on the authority of a resolution rejected by the other branch, and to persist in retaining the funds so obtained in opposition to the deci- sion of our Supreme Court.—I am Sir, yours truly,