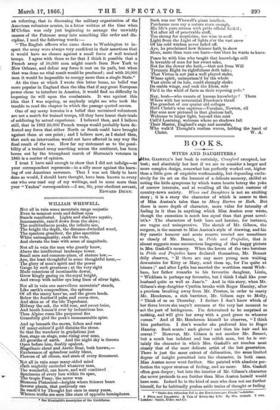 Nov all in vain some mountain range majestic

Even to meanest souls and dullest eyes Stands manifested. Lights and shadows mystic, Innumerable, rain'd down from the skies ;

The multitudinous peaks, the infinite size,

The height the depth, the distance-dwindled wood, The spacious grandeur, the pine sanctities White unimaginably, exalt the rude, And elevate the base with sense of magnitude.

Not all in vain the men who greatly know, Above the intellectual landscape tower.

Aye, the least thoughtful in some thoughtful hour,— The glory of man's spirit and the power Gauge by such greatness ; at the very sight Made conscious of inestimable dower, Grow kingly gazing on the royal height, And sweep with nobler eye long lines of silver light.

Not all in vain one marvellous mountain* stands, Like earth's compendium, the epitome Of all the starry heav'ns, and the green lands. Below the feather'd palm and cocoa-tree, And skies as of the isle Taproban6. Midway the oak, the wild rose, and sweet-brier, And heath humni'd over by industrious bee. Then Alpine roses like purpureal fire Gracefully gird the peak's immeasurable spire.

And up beneath the snows, lichen and rust Of many-colour'd gold distains the stone, So that the wanderer in gradations just Sees, stage on stage, zone rising over zone, All growths of earth. And the night sky is thrown Open before him, doubly opulent,

Exuberance of splendour nobly blent, Flowers of all climes, and stars of every firmament.

of all in vain some many-sided mind th mightily encircled whatever man, The wonderful, can know, and well combined Specimens of every lore within its span, The tropic Poesy, the never wan Blossoms Platonical—heights where Science bears Severer plants, that perilously can Be reach'd by Thought but once in many years, Whence truths are seen like stars of opposite hemispheres.

• See Humboldt's description of the Cordilleras.

Such was our Whewell's giant intellect.

Perchance men say a nature stern enough, His life's pure stream with pride official ileck'd ; Yet after all of penetrable stuff, Too strong for scepticism, too wise to scoff.

Light from the Light of lights o'er the vast snow Of his cold wisdom never faded off.

Aye, he proclaimed how Science hath to show More, more than man can learn—lesethan he wants to know.

Peace be with him who taught that knowledge still Is loveable of man for her sweet sake, Not for the dower she hath,—that not from Will Tyrannic Right its rightfulness doth take ;

That Virtue is not just a well played stake,

Whose spirit, unimprison'd by the whole Vast circle of its lore, could strongly shake Its emble wings, and seek the Ideas, sole Fix'd in the whirl of facts as their reposing pole.* Nay, hush—who vaunts of human knowledge ? There Where with her reverential Freedom's thrall The grandest of our quaint old colleges Held Christ's wise captives—Verulam, Newton, all Her sons now pictured in that glorious hall, Welcome to larger light, beyond this mist Call'd Learning, welcome where no shadows fall Their Master, England's sage and moralist, Who walk'd Thought's restless waves, holding the hand of