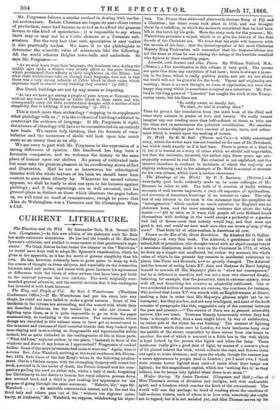 The King and People of Fiji. By Rev. J. Waterhouse.

(Wesleyan Conference Office.)—If Mr. Waterhouse had put his story into any shape, he could not have failed to make a great success. Some of the Incidents in the volume are astounding, and the naivete with which they are described delicious, but the reader has to take his chance of lighting upon them, as it is quite impossible to go on with the pages Consecutively, so confusing is the narrative. The missionaries whose doings are recorded in this volume seem to have got so accustomed to the manners and customs of their cannibal friends that they looked upon man-slaying and man-cooking as disagreeable and reprehensible habits indeed, but as quite included in the contingencies of life in those parts. " What did Imes," says our author, in one place, "fastened in front of the windows and doors of my house as I approached? Fragments of cooked bodies. Some of the more inveterate had come to tease me." Again, here is a scene. Rev. John Wataforcl, arriving at the royal residence, 8th Decem- ber, 1852, finds three of the late King's wives in the following predica- ment. One is a lifeless corpse, with the strangling drapery still round her neck, a second is in the midst of death, the Prince himself and his com- panions pulling the cord on either side, whilst a lady of rank, forgetting her Christianity in her desire to honour her royal relative, presses down her covered head, and a third is just making her appearance for the purpose of going through the same ceremony. " Refrain, Sir," says Mr.

Watsford An amicable conversation ensues, and in the end the third lady and others pass out of life "without the slightest noise, hurry, or confusion," Mr. Watsford, we suppose, withdrawing his objec-

tion. The Prince thus addressed afterwards became King of Fiji and a Christian ; the latter event took place in 1854, and was brought about by a rebellion, in which the monarch considered that he had been left in the lurch by his gods. Here the story ends for the present ; Mr. Waterhouse promises a sequel, which is to give the history of the first decade of the Christian era. We trust that his style will improve with the morals of his hero ; that the historiographer of his most Christian Majesty King Thakomban will remember that his responsibilities are not the same as when he was relating the doings of the horrible cannibal who figures in these rambling pages.